The alarm went off at 6:30am this morning and we crept off the mooring by 7:30am.  The air was cool and refreshing even though the sun was out.  Its not very often we cruise this early but after the heat of yesterday the cool of the morning was a welcome change.

Trentham lock was our first lock of the day and a boat was descending as we arrived.  Not often this trip have we had a lock in our favour so we made the most of it.


Next was the village of Hem Heath.  Here it was a bit tight getting through as C&RT were rebuilding the moorings so work boats were moored every where and a little further on holiday boats Duke and Dutchess we breasted up just before a bridge 'ole.

Soon we were approaching Stoke-on-Trent whose incinerator greets you as you approach the city.  Bridges here are modern and not very interesting, graffitti abounds like most cities though here some of it was quite good.

Stoke bottom lock nestles between towering concrete walls.  These New Zealanders seemed to be in savouring evey minute and were thoroughly enjoying the experience.  Chris was uneasy here as the lock cottage garden had a large Rottweiller prowling the fence barking like mad.  It was trying to get over the fence but fortunately did not succeed.  It did not stop barking until we were well away from the lock.


There are five locks in this group that lead you up to Etruia Junction.  The third lays right next to the Busy A53, in fact the gates are feet away so one waits under the road for the gates to open.  Interestingly the gate beams are kinked in the middle at 45 degrees so they do not fowl the bridge.  It makes it very hard work to open and close the gates.


This is the potteries area and these two kilns still remain though now the derelict factories are gone, replaced with apartments.  Such is the passage of time that an area once thriving with industry is now homes for the next generation.

As one approaches the summit of the locks you pass  the Etruria industrial museum, whilst the lock still has the stone masons mark engraved in one of the blocks.


At the top lock Chris encountered a cheery gent who lives on a boat.  He chatted away with her throughout the time we locked through.  When the lady on the boat behind arrived he included her in his tales as we then carried on.


Passing through Middleport the canal writhes round the industrial units and car junk yards until West Port Lake.  It was now 11:30am and we had hoped to stop here but there was little space.   It was really hot now so we decided to press on and savour the coolness inside Harcastle tunnel.


We reached Harecastle tunnel south portal at 5 past 12.  We were informed by the tunnel keeper two boats were in the tunnel and there would be a 40 minute wait.  No worries, Chris made some lunch and I had time in hand to check the weed hatch before the boats emerged.

The gent on the boat in front of us would not go above tick over all the way through the tunnel.  At times I had to put AmyJo in reverse as he seemed to keep stopping for no apparent reason.  He was weaving all over the place not quite bouncing off the walls.  I called out politely that if he went a bit faster he would be able to steer better but to no avail, he just ingored me.   It took well over an hour to get through.  Even the tunnel keeper, when we finally emerged, said they were thinking of sending in a rescue team in case there had been a problem.


Whilst in the tunnel the family on the boat behind were enjoying the echos in the tunnel, whooping and shouting.  The dad started to sing and then stopped.  I sang back at them, Day O and they replied ,between us we got just about got through the song.  Afterwards the kids said they really though it fun and enjoyed the larking about.

As he left the tunnel the gent in front suddenly stopped his boat and started taking photos of us behind.  I had to reverse sharply to avoid hitting him, all the time he ignored the fact we were there.  Oblivious of the queue now in convoy behind him he cruised on slowly and stopped to take photos all the way to Hardings Wood Junction.  There he stopped at the entrance to the junction totally blocking the canal whilst taking more photos, still totally ignoring the string of boats he was now holding up.

Finally with duplicate locks ahead we were able to make some progress.  After three more locks we found a nice mooring just passed the Red Bull C&RT offices for the night and walked back to the Red Bull pub for a much needed drink. 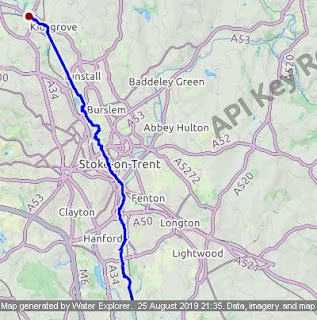