Our plan for today was to reach Westport Lake so it would only be a short run to Harecastle Tunnel  but first we needed water.  At 9:30am we moved the mere 100 yards to the water point just before Stone bottom lock to find a boat filling and one waiting.  Nothing for it but to wait as we were really low.

With nowhere to moor we asked if we could breast up alongside the boat that was filling.  The owner quite happy to let us do so and announced it will be a while yet so let the other boat fill while I nip to the local Morrisons.  Off he went, the other boat filled up taking an hour and, as we started to fill AmyJo the owner came back so we put his hose back on.

Another hour later the other owner gave up and moved off.  We then managed to start filling up.  Meanwhile a queue of boats was forming behind us,  some wanting water and some waiting for the lock.  All this time boats were locking down and wanting water.  It was getting pretty chaotic when, at 11:30am, we eventually got into the first lock.


Isn't it always the way?  All the time we were filling with water boats were coming down the lock with plenty of crews to work it.  When we entered the lock not a soul was arround.  No more boats coming down and none in sight.  Chris worked the lock alone.

We worked the next three locks with a single hander ahead so Chris helped him as well as turning the lock for us.  It was warm work as by now the day was getting hotter.  We passed the Canal Cruising company wharf where we hired our first hire boat, Olivia Ginger.  Thats her stern in the photo below.  Ironic that our first hire boat and our first owned boat are together in the same photo

Stone is home to the Joules Stone ales brewery and by the looks of it some new building works it going on at the brewery.  Not sure what this will be but its shape will be pretty mpressive when complete.

We left Stone town center behind and passed a relatively new houseing estate and clean open moorings.  One house had a railway sign that looks like it came from a local station. 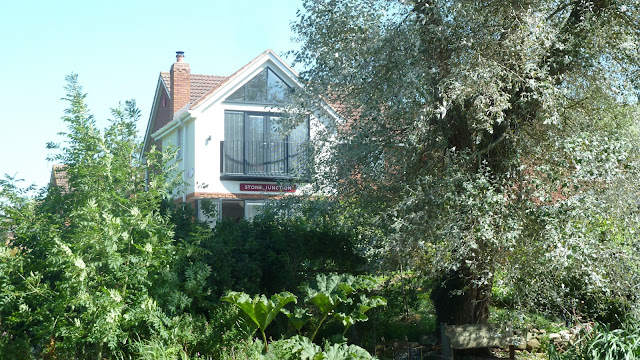 After passing through some countryside we started climbing the five Meaford Locks, turning each one after the singlehander. By now boats behind us were catching up so there was more help to hand.


After the five locks we moved into the countryside with the railway once again never far away.  Every now and again houses apeared but this one caught our eye.  Last time we passed there was only one boat and work was ongoing with renovations.  Now these look complete and the place looks stunning.

By 3pm and with the heat getting to us we called it a day at Barlaston and found a prime spot right outside the Plume of feathers pub in the sunshine for the solar panels to do their stuff.

Those of you that don't know the Plume of Feathers is owned by Neil Morrissey of men behaving badly fame.  We had a meal here and can highly recommend it.  Its not often I cannot eat all in front of me but here it beat me!


As we did not get far today we had an early night and set the alarm so we would be up with a sparrows tommorrow as we wanted to get through Stoke on Trent before the day would be out. 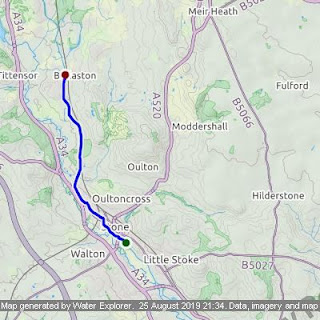