We have been out on the cut since we got back from Market Drayton whilst Chris continues to commute to work.  Meanwhile with the recent good weather (looks out the port hole at the pouring rain) we have had, its given me the opportunity to see to those "round to it jobs", you know the ones, those jobs you've been putting off until you get round to it but seem to take ages to get done.

First up was an appointment with the engine for its annual service.  All the surrounding floor panels and steel work removed I was disappointed to see so much rust on the base plate.  More on this later.

Chris Jones did an excellent job of the service and even found time to fit the pulley locking kit I'd got from Beta.  I'd had trouble trying to fit it as it would not slide on the spline.  Chris's experience made it look easy.  He explained the tolerance was so fine the paint had to be removed first to allow clearance.  An hour of filing and hammering and the lock was on.

With the service out of the way and the boards removed I decided to tackle the rust in the engine room.  Regular readers may recall I did this last year but the Midland Chandlers paint I used clearly was not up to the task.

After degreasing and wire brushing I treated the rust with Fertan and left it Overnight.  Next morning a coat of red Oxide primer was applied.

Finally the whole area was coated with International Damboline Grey bilge paint.  This appears to be much thicker paint so hopefully will last better than the other paint.  Time will tell.

Having taken up our 14 days on the mooring it was time to move.  As I was preparing AmyJo for cruising I zipped down the Cratch cover and the front Starboard zip on the cover broke.  No amount of coaxing would get it to do up.  In the end I got it together with a series of safety pins.  Not ideal but it did the job.

A run down to Iron Lock in glorious sunshine saw us moored opposite Chas Harden's wharf.  Nearby is Cratch and Canvas Repairs so the cover was left in Nik's capable hands to fit a new zip.

Whilst that was away I took the opportunity to give the cratch boards a coat or two of varnish. Luck was with us and the weather remained fine so I got two coats of quick drying varnish on in one day.  Next day the cover with its repaired zip was returned and re-fitted.

In the following weeks AmyJo was moored in the marina whilst we did Crick and a visit to the folks in Essex.  On our return Chris caught up with the washing but when she came to use the tumble dryer it stopped halfway through the first load.

With no choice I prepared to pull the dryer out to investigate so went to switch it off at the mains socket.  Try as I might I could not get the switch to move.  Investigation revealed this... 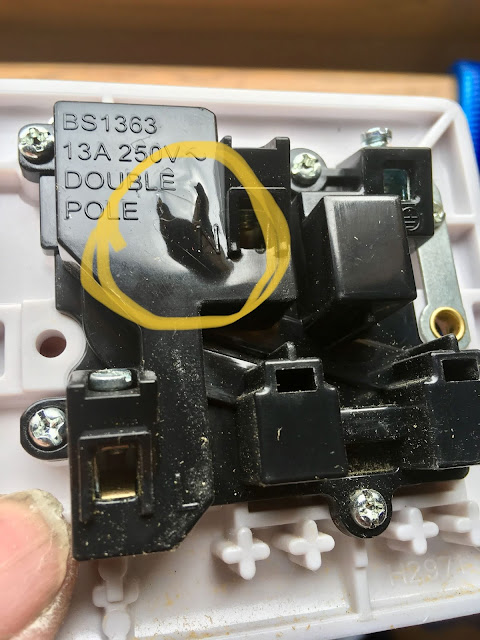 The plastic behind the switch had swollen and was clear it had started to melt internally!  A lucky escape that it did not catch fire.  A new more suitable switch has now been fitted.

Last week our purchases from Crick arrived in the form of a new top box and plant tubs which I will use as fender stores for when not in use.  The old plastic box had served its purpose but now sitting up front was to high.  The new box holds just as much but is lower so does not impede visibility.  After a finishing coat of paint to colour code them with Amyo's colour scheme they are now looking part of the boat.


Finally one of our readers commented on our solar panels and asked how our system was set up so I offered to post about it.  WARNING ...    techy post follows :-

AmyJo's electrical system is primarily a Victron system.   Six 128AH Rolls AGM batteries make up the domestic bank.  As AmyJo has a 24Volt system these are wired in 3 parallel pairs to give 24volts 380AH capacity.

Charging is via the engine alternator or via shore line through a 30v/3000k/50amp inverter and is monitored by a Victreon BMV 702 battery monitor.

Overseeing all this is a Victron Colour controller.  The Inverter, Battery Monitor and MPPT controller are all linked to this via RJ45 cables.  The controller displays all the voltages etc on one display.  It can also be used to change some settings on all the above. 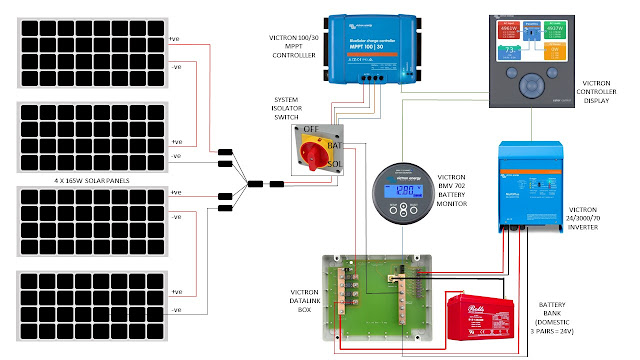 Now the clever ones among your will question why the solar cables go to the data link box and not directly onto the batteries.  This was a temporary measure as when installed the Solar system was controlled by an Epever system that could not communicate with the victron kit. I was not happy with this as I could not easily see what was being generated so had to put the cables into to datalink box so the system could detect the incoming charge from the panels.

I've since replaced the Epever with the Victron unit I had with the old panels and will move the cables back to the batteries when I can.  No small task.

Now with a full Victron system in place I can use the mobile phone victron app to check on the system and anytime and anywhere I might be, including what the solar panels are generating.  This is because data is sent from the Colour controller via the internet to a secure Victron server.  From there the mobile app can access it.  There is a few minutes lag but its no problem.

Above is one of the mobile app displays showing the colour control display.  The 35W of solar power is low as its a very overcast and dull day.  We usually get over 400w at 48v of solar power on a sunny day and 200w on a lighter cloudy day, ample for our needs.

So there you have it.  Not ultra modern by any means but it works for us.