Staying Put for Lock Down

Who would have thought?  Only last week Chris and I were planning our Easter Cruise with freinds.  We had planned to go onto the River Weaver via the Andreton lift but the lift is closed for maintenance so we changed our plan and was going to head up the Llangollen.

Now, after Boris's lock down announcement, CRT have told us unnecessary cruising was to be discouraged and that the 14 day mooring rule was being suspended until 14th April when it will be reviewed.  That scuppered our plan completely so we are moored up and staying put.

For the non boaters.  The maximum we can stop anywhere on the canals is 14 days, less on recognised visitor moorings.  Any longer is deemed residential and that is not allowed on the canal except in designated places.  Failure to comply could mean, in absolutely worst case, having your boat impounded and removed for scrap, or at best a telling off and made to move.

The weather has been so good that I have managed to give AmyJo a good clean and polish where she can be reached.  My only concern was the sheer number of walkers, dog walkers and cyclists that are passing by, its worst than the first day of the sales at Harrods!


The level of intelegence that some people have beggers belief.  Many do not observe social distancing and clearly are not aware of the risk they are putting themselve in.  OK they might be making the one outing for excersise that is allowed but I very much doubt they all are.  Even the vunerable elderly are out in numbers as if nothing was wrong.

On Monday Chris went to work for the last time.  The school, now closed, is only open for 18 children of key workers, and only one child is in the infants where Chris works.  Chris is now likely to be off work until September when hopefully the virus crisis has passed.

Today, Thursday,  Chris joined me for Smudges lunchtime walk.  She joins us to get out of the boat for a while.  Walking past the pub car park we could not believe our eyes.  On the grass bank behind the railings you can see in the picture below, a young family of three, mum, dad and toddler, were actually picnicing in the sun!  Dad climbing over the railings several times to retreive his dog just where people had previously leant for a rest.


I would have spoken to them but a young man approached them before me.  Although we could not hear the conversation it was clear from his body language he was giving them a good telling off.  The young man and family left shortly after.


We have been enjoying our walks in the sunshine as have mny others.  Its so nice to not get wet, muddy and cold.  The days ave been quite warm and so we really enjoyed being out.

Thanks to the good weather we have been able to get the rotary line out for Chris to hang out the washing.  Its so much better when they get a good airing outside.

Seems a few people are still treating this as a holiday, this family came paddling past us this afternoon, clearly thinking they are imune to the virus because they are on the canal. 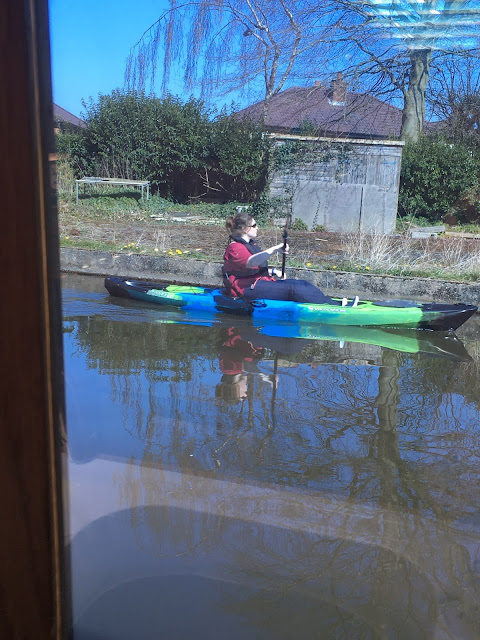 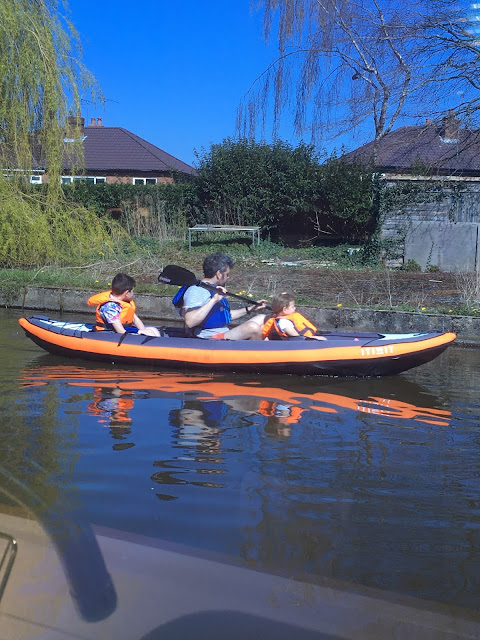 So thats it for now.  We're both OK so far and are trying to keep to the guidelines.  At the moment we have all we need though our first shopping trip will have to be done tomorrow.  Unlike many we cannot hoard as we simply don't have room to store it.  We need bread and milk plus some food for Smudge.  I also have a prescription to collect.

Poor Smudge cannot unterstand why we do not stay outside more  in the sun like we used to and has now started to look longingly through the window bless him.  He will not leave my side, follows at my heels as I walk through the boat, clearly knows something is not right with the world and is anxious.  I re-assure him as much as I can and spend alot more time with him and hope he will come to understand.

Sorry its not been an upbeat post but theres not much we can do for now.  Stay well everyone and hope you and your families get through this worrying time.  We will beat this virus, never has humankind been better placed to find a cure as it is right now.
at 21:08:00 1 comment:

Having stayed at the Shady Oak for 14 days it was time to move.  The evening before, we called into the house for the post, to see the girls, and to collect some more coal.  We left AmyJo in the dark and set off via the village of Huxley.  As we came to the village there was an almighty bang and the car lurched.  We had hit a pothole.  One of many around these parts but one we were not aware of.

Next morning we returned to the spot to record it so we could claim.  We were stunned by the size of it.  Below is a photo of it with Chris's foot in it.  Whats not clear from the photo is its at least 5 inches deep where her foot is. 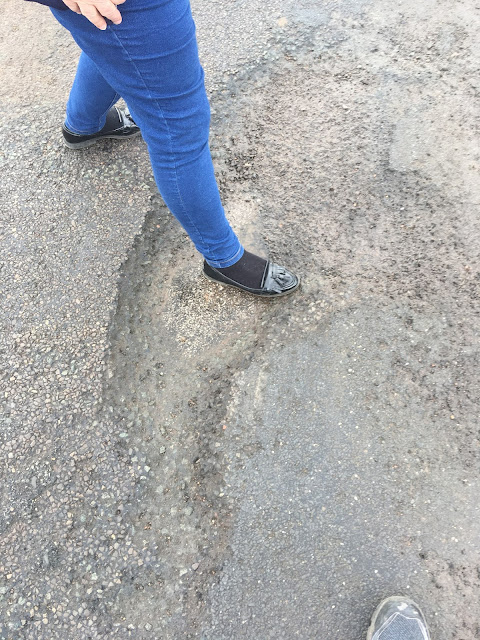 checking the tyre we found a carbunkle bulge and damage to the rim.  I used the council web app to report the pothole location and had the tyre replaced.  I am now claiming for a new tyre.  Whats more annoying is the tyre was only replaced 4 months ago and that was also due to a pothole.

We later left the Shady Oak and called into Tattenhall marina for a couple of nights.  On Tuesday Smudge was booked to have a groom and claws clipped and Wednesday the tyre was to be replaced.

Whilst there I spotted a new peice of equipment down by the workshop.  A straddle carrier has been purchased and this will now be used instead of the low trailer.  It will be instesting to see this in action when AmyJo comes out for her blacking! 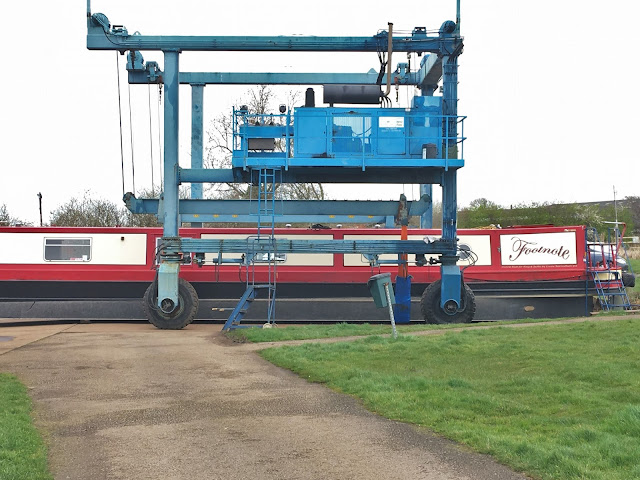 Having got Smudge groomed and tyre changed, we left the marina yesterday (Thursday) and headed for our fav mooring at Waverton.  On the way I spoted a boat has become a celebrity on the BBC.  On closer inspection it turned out to be Rob Cumming's Naughty Lass. 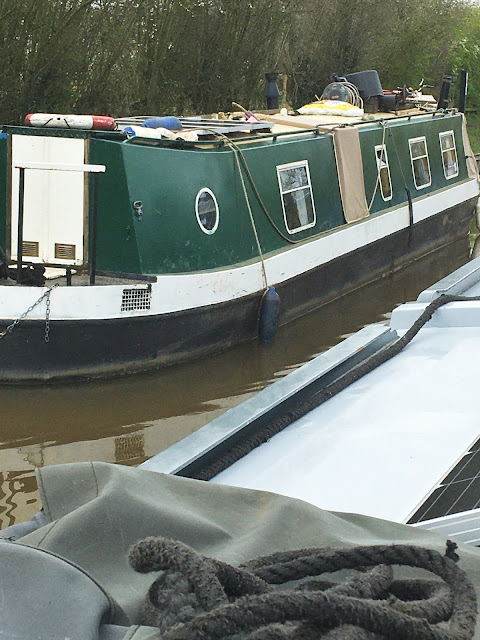 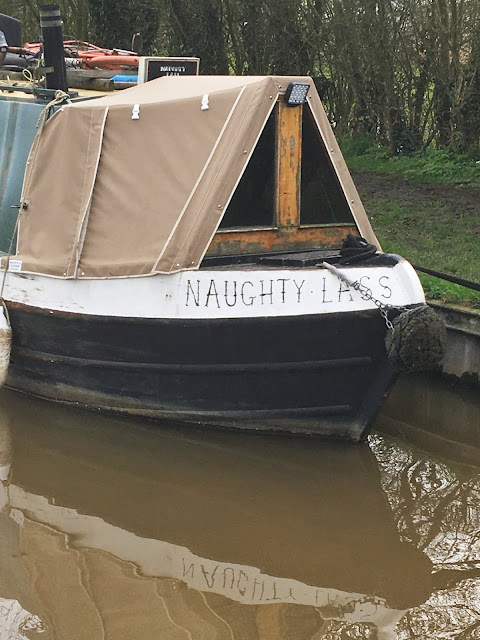 For those that don't know, Rob has been producing Vlogs or video logs on youtube for some time and they are really interesting, telling how it really is living afloat and not the sun and roses Tim and Pru portray.  His vids are well worth a look :-

Rob was approached by the BBC last year and a 6 part series of his journey was broadcast.  He is in the area as he is due to produce a second series though this is now on hold due to the virus.

One of the problems cruising in the winter is the state of the towpaths along the cut.  Here on the Shroppy is no exception.  Mud is everywhere and in this case quite deep.  It makes morring up and walking Smudge really difficult.


We are heading towards Chester as from Waverton on the towpath is tarmaced so the mud is not a problem.  Its a real problem with Smudge cleaning his paws and bathing him when he gets covered so leaving the muddy towpath behind will be good.

We found boats moored at Waverton so we carried on and found our usual mooring free at the Cheshire cat pub.

Hope everyone is OK and we pray you manage to get through the coming months.  We can get through this so please do look after yourselves and those who can't. 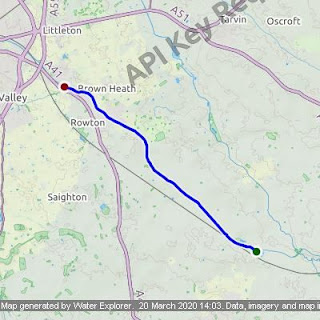 Out and About and All that Gas

Having got through the trauma of loosing Mum and Dad and the weather finally abating we decided it is time to leave the marina for this season.

Yesterday, Monday, was the first real break from the strong winds and rain.  It was a perfect winter's sunny day with only a little wind.  Our destination for the day was Chas Harden Boats by Iron lock.

Our oven thermostat appears to have stopped working as the oven temperature was a constant 300C despite what ever setting we called for.  Chas, being Gas registered, agreed to replace it with one we had got from the manufacturer.

Before leaving we treated AmyJo to new stern fenders as the original had finally started to collapse and was not really protecting the rudder.  This time, however, I decided to go for a tipcat and button with the hope this would be more robust and protect the rudder better.  So far it seems to do the job well.  I've still to remove the excess chain but for not this will have to do.

The cruise to Chas Hardens is not far, about a 2 hours cruise.  Depite the cold temperature the sun had some warmth in it for once and with the light wind it felt quite warm.  As always we revelled in being out on the cut again.  You just cannot beat the feeling of elation as you turn onto the cut after a spell in a marina.  Yesterday was no exception.

This morning (Tuesday), Chas came to the boat and we soon had the oven out.  Fortunately Fernwood had the forsight to fit armoured flexible cable from the gas pipe to the oven so it was a simple matter of pulling the oven forward, disconnecting the gas pipe and electric cable then lift out onto a table to work on it.

Replacing the thermostat, howerver, was not as simple.  As you can see Chas had to almost completely dissasemble the oven to get it out but after 2 hours he got the job done.


So now tonight we'll see how we get on when we cook dinner.  Thank you Chas you've done a great job!

After early rainfall the wind has returned but the sun is now out making yet another lovely day.  Just as well as another cratch cover zip has gone and will not do up.  As we are not far from Nick's Canvas and cover workshop, Nick is now replaceing the two Portside (left hand) zips for me.  This means all zips on the cover have been replaced.  To be fair they get a lot of use as we enter and leave AmyJo several times a day via the front.

Whilst this is being done I've put up a temporary tarpoline.  It is not perfect or pretty but does the job keeping everything dry while the cover is away.


So now we're out of the marina for the season hopefully will have something to post about.  We are formulating our summer cruise later but we have a re run of the Anderton lift cruise planned shortly to look forward to, hopefully with better luck and we can get up and down the lift this time.

Oh and I almost forgot.  The new double glazed port holes have now all been fitted and are a great sucess.  There is a noticeable improvement in warmth inside AmyJo and condensation is almost non existant even when its really cold outside 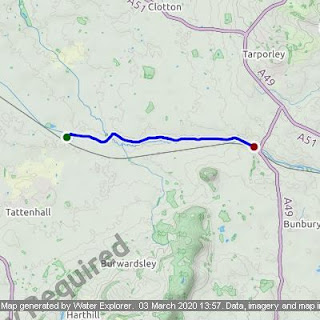