Sunday was our last day of the trip.  None of us were keen to get underway as we knew we did not have far to go.  With the sun shining we did eventually get underway.

At Bunbury we waited in the queue though only two boats were ahead of us.  As usual Chris went on ahead to see what was happening.

It wasn't long when she reported back that there were two boats coming up.  I prepared Marie to go in and expect to do the famous Shuffle.  Before she could untie  Chris reported that the owners of the two boats were refusing to do the shuffle and had already started to fill the bottom lock.

Hoping they could hear I replied to Chris I thought they were being selfish and not conserving water.  She came back that boats were newly painted and that they did not want their paintwork scratched.  I wish I'd thought of it at the time but I should have replied did they think my helmsmanship was no good but then its too late now.  No choice we waited it out until they were through.

Eventually we could proceed and had learnt one boat was coming up.  The shuffle was duly executed, with no boat touching any other.  Smiles and cheery chat all round was had as we passed by.


The next locks were uneventful so we quickly got through Tilstone and Beeston Stone Locks.  As usual there was a queue at Iron lock but no one wanted to go through in pairs which is most wise as the lock walls bow near the bottom.  I did do it once next to a very experience boater but would not recommend it nor will I do so again.

On our arrival at Wharton Lock visitor moorings there was just space for three boats to squeeze in, so Steve & Steph, Marie and Graham pulled in.  We had no choice but to go down the lock.  At the Shady Oak every available mooring space had been taken on the way to the pub and through the bridge 'ole.  We had no choice but to breast up alongside our good friend Paul's boat, nb Jasmine, for the night.  It was now 5:30pm

We had booked a table for the carvery but had been texted earlier by Yvonne, the landlady, that she was fast selling out and would we like our meals plated up or we'd loose out completely.  We readily agreed and were grateful to sit down for a well earned meal.

That evening local guitarist Chris Fletcher entertained us and a great night was had.  This was a fab finish to a wonderful week cruise in great company.

Next day we took it easy and in the afternoon chilled in the garden making the most of the bank holiday sun.  The pub was busy with customers all day keeping Pete, Yvonne and staff very busy.  Its so good to see the pub busy like it used to be.


Steve (nb Merlin) is a member of a Beatles tribute band, he plays John Lennon apparently and also performs as a solo artist.  I could not resist the opportunity so talked him into having a bit of a jam with the guitars in the evening.  The pub was quieter then so we could play to our hearts content, even those who were visiting the pub enjoyed our little set.

So that's the end of our Easter cruise.  We're back into normal life out on the cut for the summer staying fairly local so Chris can commute to work.  Chris is back to work now and I am starting to tackle some of the jobs I've been putting off, but that's for another post.
at 21:22:00 No comments:

As usual we set off at 10 am and descended the last of the Audlum locks on a warm sunny morning.  There was little wind and so a pleasant cruise was had. 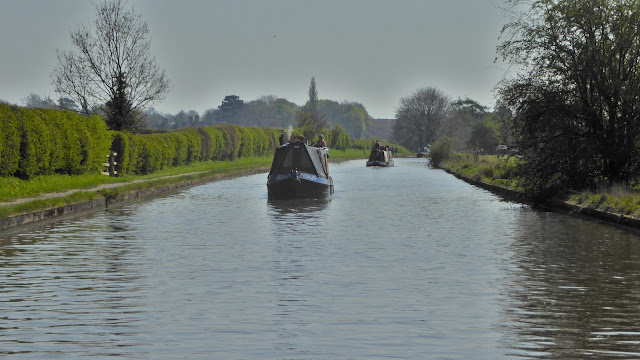 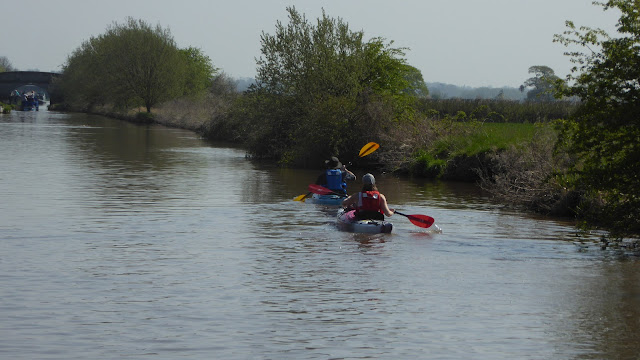 We had an uneventful run through Hack Green and got to Nantwich early evening to find every available mooring space taken with boats button to button through the town.  Eventually we got a mooring on the visitor moorings at Hurlston Junction and had another pleasant evening out on the towpath. 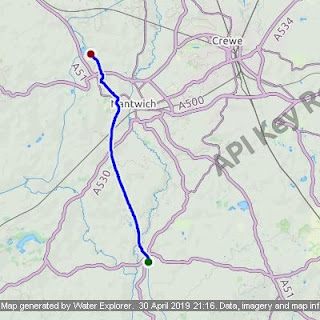 Next morning was Saturday and a glorious one it was too.  The sun was already quite warm so it was t-shirt weather for the day.  We took Smudge for his usual morning walk then prepared to up pins.

One could tell it was a bank holiday weekend.  The canal was busier than the M25.  Every bridge 'ole had a queue of boats going through in either direction.  I've never seen so many boats all on the move at once.  We waited our turn and boats passed through the bridge taking it in turns, all very civilised.


At the Barbridge Inn the moorings were busy as expected but here we met several of our Tattenhall boats.  nb Chugabug on the pub Jetty, Harry on nb Utopia waiting to come through the bridge followed by Dave and Jo on nb Third and final.  Harry tooted his horn to welcome AmyJo as she came through the bridge.  This was soon followed by Chugabug's horn, Third and final joined in, then Marie's on nb old Faithful so of course we joined in sounding AmyJo's horns too.   The cocoffany of noise was deafening but everyone took it in good cheer thankfully.


After passing Barbridge junction we carried on to the Cheese Factory at Calverley.  Here they do an excellent full English breakfast so we stopped for that.  We were not due back at the Shady Oak until Sunday evening so with the sun beating down we decided to moor up Bunbury side of Calverley and sat out taking in the sun.


Unknown to Graham we knew it was his birthday so whilst in Market Drayton we had bought him a birthday cake which in the evening we presented to him.  We did not have any candles for him to blow out so Marie improvised with a match used to light the log burner

This night was our last of the cruise so we had a bit of a celebration party and bar-b-q in the evening.  I think we nearly emptied out the contents of the drinks cupboard and sat out until late in the night enjoying the company and banter