Who would have thought we were in April and the on the doorstep of summer?  It's been raining heavily in Chester on and off for 4 solid days and this morning Chris and I battled the winds and rain in our sailing dinghy racing on the River Dee (we must be insane).  The river looked more like the estuary out by Liverpool with waves and gusts of wind racing along.  We recorded gusts of 35mph at times on the weather station in the clubhouse and we got cold and drenched in the process.  Needless to say we did not win but managed not to capsize and now ache like mad.


Some of our members were at Rutland water today and apparently the winds there were horrendous.   The owner of this Enterprise had a lucky escape and will have an expensive repair bill I should think.


This was caused by the immense pressure of the mast and sails pulling on the chain plate which tore up the deck.


In one of my previous posts I promised to upload the video we took of the Giants in Liverpool when I got chance and here it is.  Not as professional as the one on youtube but with some excellent close ups of the giants themselves

I like the fact the guys had to leap off the platform to make the uncles limbs move.  They must have been shattered after doing that all morning.

Anyway dinner beckons and there is a nice glass of wine to go with it so bye for now.  Stay dry and warm.  Hope you are not being battered too much in this awful weather.

Hi all,
Its been a busy week on the house front this week.  We're getting a new central heating boiler on Tuesday as our current one cannot make up its mind whether we want hot or cold water.  Usually whilst taking a shower we get a nice hot blast for a while and then cold for a few minutes when the boiler kicks in but of late the water temperature is ranging from freezing cold to piping hot in minutes, swinging either way.  Eventually the boiler then goes into a hissy fit and cuts out on overheat leaving one recoiling from the torrent of freezing cold water.  Not good when lathered up in shower gel! (sorry for the image that congers up, not pleasant I guess)


The nice British Gas engineers have been out so many times to fix it in the past before and after we moved in they have now washed their hands of it and now refuse to cover it under the gas insurance any more.  We have had no choice but to arrange to replace it with a new modern one.  Hopefully that will sort out the water temperature a lot better.


Should be simple you say, swap it for the new one, job done.   Oh no, not us we don't do simple do we.  Her indoors Chris would prefer to move it to the loft to give us more room in the bathroom (I confess she's right really), which is fair enough except the loft is an absolute mess.  As the bungalow was built in the 1930 somethings, its had a new roof (twice) and a large extension at the back, both of which have deposited large amounts of brick rubble and tile rubble on the polystyrene chippings that serve as lagging, on top of which is a layer of dust and rubble covered modern fibre lagging that is so compressed it is doing no good what so ever.

Now British Gas, bless them, will not fit a boiler in the loft unless there are proper stairs and a proper floor to work, on the grounds of "elfen safetee".  They don't want an engineer putting his/her foot (or his/her whole self for that matter) through the ceiling and neither do we to be fair.  OK so we have the proper stairs and they lead to Jo's my god what a mess loft bedroom, but where the boiler is going to go, on the other side of the bungalow outside Jo's room and though a door in a stud wall there, is no floor .  Ah you guessed it, yours truly has spent the evenings of last week and this week collecting up all the old lagging, brick dust and chippings into bags and then laying new lagging, topping that with chipboard floor panels from B&Q.  Today I built a stud wall for the boiler to be mounted on and cleared the lagging away from where the existing boiler pipes come up into the loft so the fitters can access them.  Not an easy task considering the loft has become somewhat of a major junk store room for stuff that don't fit downstairs and is still boxed from the move. Yes, yes I know we should need sort it and clear it out but we have other priorities for now.   I've had a juggling act to move boxes to clear space as I clear the rafters and lay panels.

Well I'm showered, just, and now enjoying a nice glass of cider or three before we enjoy a meal at the local Sizzler as chris reckons I've earned it (their doing two, two course meals deal right now and at a good price).  So so long for now.
at 18:32:00 No comments:

A giant little girl and her dog called Xolo

We got up today to a dull grey sky that threatened to pour with rain.  We had decided to go to Liverpool on the train to see the much talked about giant little girl puppet and were not disappointed despite the odd shower.

In Liverpool, the girl is representing a real life schoolgirl from the city, May McMurray, whose father was a steward on the Titanic. She wrote a touching letter to her father the day before the ship sank, and the story goes that the larger giant is her uncle, a diver, who has found his reply.  Along with the girl and her uncle, there is a third giant - a dog called Xolo, which is the size of a van, and which plays with the girl, its eyes darting, tail wagging and ears twitching as it goes.


We waited for over an hour in the rain but that finally stopped.  We managed to get a front row view and it was well worth the wait when Xolo the dog bounded into view tongue dripping real water, tail wagging and heading for the crowd to have his head patted by the children.
. 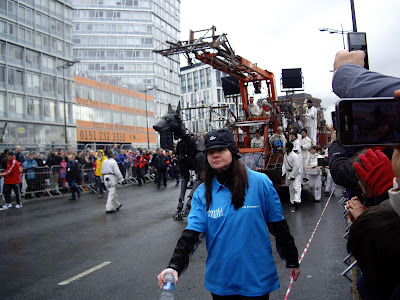 Next came Mary.   She towered over us and was a magnificent sight, so realistic in her movements it was easy to forget she was not real. 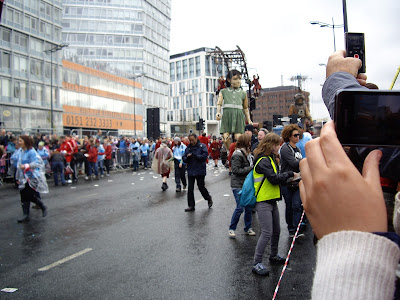 It takes 10 people to tug the ropes that moved her arms alone.  She is 30 feet (9m) tall and made of wood, but as she blinks, opens her mouth and looks around, patiently watching the workers scurrying away below, it is tempting to think that a part of Lilliput has come to Liverpool.  Her face movements are subtle and realistic, and her eyes - the window to the soul, after all - are beguiling enough to tempt you to suspend your disbelief.


Following Mary came her even taller uncle (who dove on the Titanic and found the letter to Mary).  A real giant of a man (quite literally) and the  Lilliputians (as the puppeteers like to be known as) were working up a real sweat leaping off the support crane in order to move his limbs. 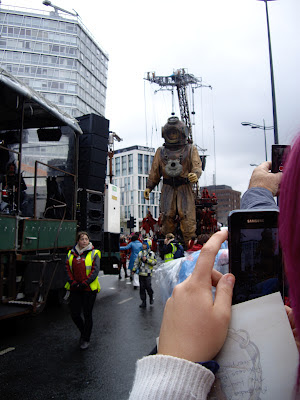 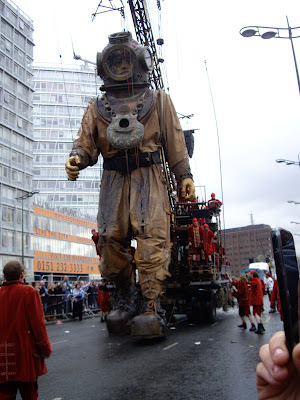 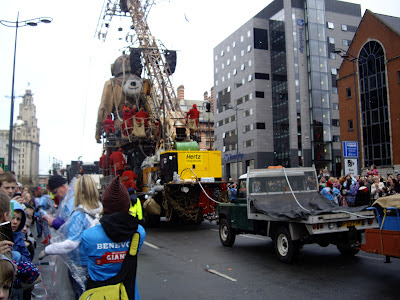 The uncle takes 31 people to control at any one time, using ropes, pulleys and motors. The girl is accompanied by 24 Lilliputians, while the dog has a crew of 21.  If you are interested in seeing more watch BBC North west at 7.30pm on Wednesday 25th April as the whole thing is being televised, but in the meantime here is a preview on YouTube (click)  Much better than my video.


The whole event was absolutely amazing, the atmosphere great, and I managed to get some great video of it which I'd put up on YouTube when I get 5 minutes.  After a great day we had some lunch in Subway and then queued to get on the train home.


Thats all for now as we are putting our aching feet up and having a much needed cuppa.
at 17:08:00 6 comments:

It our Joannes birthday today so when we got home from work we treated her to a meal of her choice.  Jo had requested a Chinese buffet so we booked into Fuxion restaurant at Cheshire Oaks and had an excellent meal there.  If you are ever in the area and like Chinese food then Fuxion is a must stop.

Hi all,
Happy Easter to everyone.  Hope the weather is dry for you and the cold is not spoiling the holiday.  Chris has had a busy week as she is on half term break and so she decided to give the bungalow its first thorough spring clean.. I think she feels happier now the place sparkles and has that fresh spring clean look about it.  I have to say its noticeable how much cleaner the place looks.


Today, Saturday, two instructors and I had 12 youngsters out sailing on the river who had been on our club training course last year.  The idea being a refresher course before the training starts this year.  Many of the students had remembered quite a bit so it was nice to see them enjoying themselves although busy for us, getting the boats rigged and them packed away afterwards.


This afternoon we took ourselves up the road to Ellesmere Port Canal boat museum for the afternoon and met up with Jo and Keith on Hadar again at the boat festival.  There was a lot going on and plenty of working boats to admire, some well known like fly boat Saturn looking splendid after being repainted. 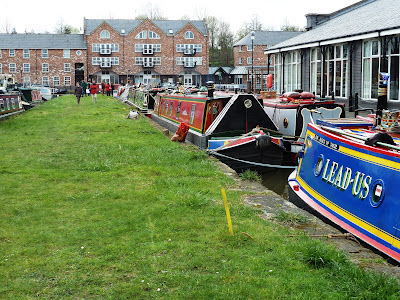 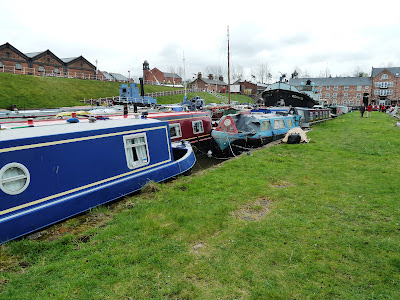 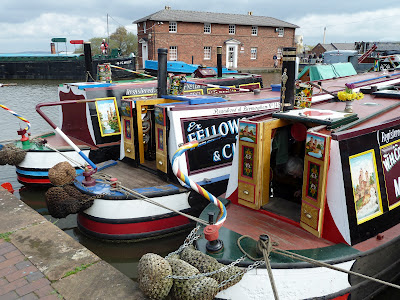 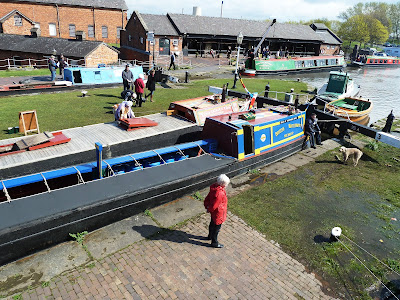 Spotted this yesterday, it is actually clouds but the photo makes it look like a wall of smoke 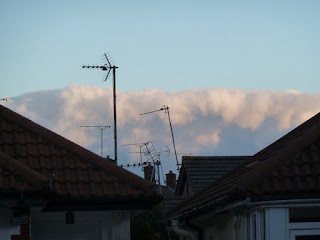 When we moved to Chester we were told it has it's own micro climate.  Well here is proof.  While all around us are snowed in or getting wet at Chester the sun Shone until today.
at 21:12:00 No comments: