Lock Down Continues and a Major Malfunction

Hello all.
Hope you are all keeping safe and avoiding the virus?  We have so far but then, not cruising, we're spending the majority of our time inside AmyJo.  We'd love to sit out on the tow path but where we are the walkers and runners abound, far to busy to sit out.  Instead we sit in the cratch and people watch with a drink or three.

We have not posted before now as whilst watching Netflix last week we lost all internet signal.  We use a Huawei MiFi router hooked up to our two external antenna and this had stopped working.  When I inspected it it felt quite hot.  On removing a cover I was met with this. 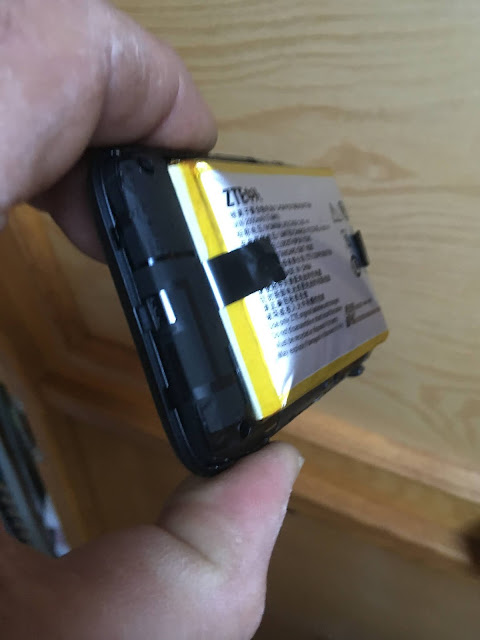 The Lithium Iron battery was badly swollen and clearly on the point of bursting open.  Not quite sure why this has happened but the router has been in service for at least 3 years so we can't complain. We have also been experiencing slow internet speeds and intermittent outages and this would appear to be the reason.

A search on Amazon and a similar more updated version was found and ordered.  We installed it when it arrived and now have good signal and as a bonus this model is two times faster than the old model and can run 10 hours without a charge.  Better still the antenna connections are much more secure and as a result we now have a full 4G signal.

I guess like a lot of liveaboards I've used the good weather to get some painting done.  The back doors and hatch had loads of chips out of the paintwork and the hooks that hold the doors open had put large gashes into the back cabin wall so I dealt with all these.


The swan neck is still getting coats of paint so is still work in progress but I'm pleased with the results.

Next job to tackle was our water tank gauge.  Ever since AmyJo was launched this has never given a reliable reading.  It showed full when the tank was full but then the level indicated dropped away to zero for almost no reason.  We always knew showers and two wash loads plus day to day washing and toilet flushes the tank would last a week but the gauge would show almost empty with a day or two.

With time to spare I ordered a new one planning to fit the display forward in the saloon nearer to the sensor figuring that the 50 foot plus run of cable between the two could be causing a drop in signal and hence the false reading.  We have two other gauges for waste and fuel but as the sensors are closer to the displays at the rear of AmyJo they seem to be accurate and bear out my reasoning.

The new one arrived and I installed it without too much of a problem, in fact its was dead easy to do as the new sensor had the same size pipe fitting so it was a case of just removing the original and inserting the new.

The new gauge is now mounted in the wall just to the left of the front door so now we don't have to run to the back of the boat to check the level.

After filling up with water and calibrating the sensor to show a full reading we hoped that would be it.  We were wrong!

Within an hour the level, despite not using any water had dropped to 50%.  How could this be?  I spent ages looking for leaks and found none but when Chris filled the kettle the penny dropped.  There was no leak! This type of gauge relies on head of water pressure to register.  The more water in the tank, the more pressure and so the higher the reading.

What is happening is the sensor is fitted between the pump and the tank and as a result the pressure at the sensor was gradually dropping.  As soon as Chris ran the tap and shut it off the pressure restored and the reading rose to show the correct level.

We also noticed as we both walked down towards the back of the boat the level indicated also rose.  Clearly as we walk through AmyJo we affect her trim (angle from back to front) [no puns about our weight please!], this in turn is making the water shift slightly toward the front or back of the tank lowering or raising the level sightly at the sensor end which is at the rear of the tank.  Now we know we can re calibrate the sensor next time we fill the tank.

Another bit of news we are moving with the times and starting regular YouTube vlogs (video Logs) for a trial period.  You can access these by clicking on the YouTube logo at the top of the blog.  Hope you enjoy them and if so do subscribe then click the notification bell and you will be notified when we post a new video.  Don't worry we'll still be keeping this blog going so if you have limited data allowance and can't watch the videos you'll not miss anything.

Oh I nearly forgot.  Did you work out what message I sent using AmyJo's horn in the last post video?  It was my attempt at Morse code for "Thank You NHS".

Well thats it for now.  We're still observing the no cruising rule but my, this weather is making it so hard not to.  We resist as its for the best.  I just say to myself

Stay in and win
Go out and die out
Simples

Take care and stay safe everyone.

Hello all,
Hope you are all keeping well and managing to stay sane in this topsy tervy world we find ourselves in.


This week I finished giving AmyJo her spring polish though now only the Starboard (right) cabin side is left to do.

Now the outside is done as far as I can, I turned my attention inside.  We have several chromium light fittings and vents on the ceilings.  These were in bad need of a polish, so over the next two days, each one was taken down and given some attention.


On Thursday evening at 8pm we joined the nation to show our thanks for the NHS.  I used AmyJo's horn to send a message.  Can you guess what it is?


I'll give you a clue, its my attempt at morse code.  I'll reveal all in my next post for those who can't work it out.

The young lady you can see in the boat ahead is none other than Emma of vlog "Narrowboat Girl" fame.  Like many of us Emma and her mum are sitting out the lockdown and just trying to stay safe and well.

Vlogs are becoming very popular these days and so we're thinking of giving it a try.  Would love to hear your views on this.  There are several vloggers out there so would I just be copying them or would you like to see life on AmyJo in video as well?