We were up and ready to cruise at our usual time this morning.  The sun was shining but a chill could be felt in the breeze.

First order of the day was to negotiate the 4 Stourton locks.  Clearly the nearby house owners have taken it apon themselves to maintain the top lock.  Mown lawns for grass and flower beds neatly planted surrounded the top lock, very differant from the rough cut banks of the towpath we had just left.


Several gardens backed on to the cut below the lock.  One owner found a unique way to deal with the bywash that runs through their property by building a boat house styled bridge over it.

The bottom lock is near the Stourton Junction.  The junction is wide and open unlike those we had negotiated before. Long sweeping corners make it very easy to turn and see what is aproaching in either direction.


Just after making the turn and picking up Chris a boat came through this bridge and turned up the Stourbridge canal.  Lucky for him he'll now have the locks in his favour.

Unlike the bywashes on the Shroppie the by washes on the Stourbridge and Staffs canals are all routed well away frrom the locks so the flow does not cause problems.  Most have large collectors like this one while the outlets apear far away with much reduced flows.

At Gothersley lock we were met by this boat.  The owners were heading to Kidiminster.  The guy informed us they provide a service where foreign customers are given the chance to cruise and at the same time learn to improve their English whilst on the trip.  What a great idea!

After Gothesley and Rocky locks we came to Ashwood Nurseries.  Its owner lives alongside and has beautifully tended gardens.  The sign asks boaters not to moor opposite the bungalow.  I think its a bit of a cheek to do that especially as suitable mooring spaces are few and far between, but then I don't moor round here so don't know the reason behind the "polite request".


Next is Greenforge lock.  Here a neat lock cottage had its owners drinking tea outside watching the activity at the lock.  What an idilic way to while away the day.


Freinds of ours own a boat called "Anne of Greenforge"  I wonder if this was where the boat came from before they bought it.


At Swindon the gardens are well maintained and this one must have just been re landscaped.  Neat and formal its delightful.  In fac the canal is relatively rubbish free, wider and deeper making progress much better.  I haven't been down the weed hatch today! 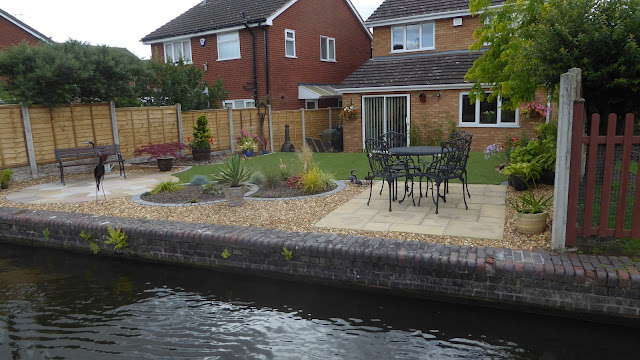 After Swindon and Marsh lock one comes apon Botherham Staircase locks, a two chamber staircase.  These locks are quite deep, the second being on the other side of a road bridge.  One cannot see the paddles of the top gate from below nor can the lock wheeler see whats happening in the chamber below.  Good communication is essential here.

A little further on we came to Wombourne, Chris wants to call it Wombledon.  Here a modern 3 bed semi has been given the barn look with this unusual extention.  Instead of looking out of place it actually works well.  The big windows downstairs show a lovely space inside.

There are some moorings just before our next lock, Bumble hole lock,  after our busy day yesterday and the moorings right outside a pub with a delightful, if noisy, beer garden full of kids playing,  we decided to stop and relax with an evening meal in the pub.  By 7pm all was silent and the garden empty save a few adults. 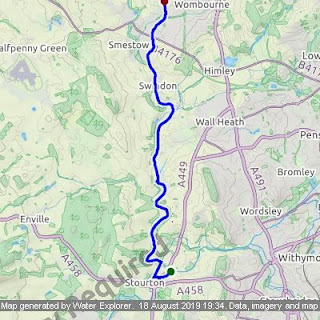 Loving reading about your travels. And I also like the barn look. What a great use of space. xx