We had a slightly earlier start today.  Hazy sunshine greeting us as we got underway though it was already quite warm.  At Audlem Top lock Chris liberated two Scones with jam and cream from this little self service hut.


A short cruise brought us to Adderley bottom lock.  Here most of the lock landing had collapsed except the last 6 feet.  A boat was moored at the first available landing spot despite empty visitor moorings as far as the eye could see.  The collapsed bank not visible until I had passed the moored boat leaving me with no alternative but to try to reverse up to his stern and the bank.

With the building wind it was really difficult to back up to his stern  or back past him to enable Chris to disembark.   Despite my cursing, change of engine revs and the to-ing and fro-ing of AmyJo to get into the bank the owner did not materialise until after I entered the lock.  Only then did he appear nonchalantly and move off.  I appreciate he may have been late getting down the locks but he could have been a bit more thoughtful of others and moored further on or moved off early.


At the second lock Chris was assisted by this cheerful CRT chapp.  He helped with the gates and chatted whilst AmyJo rose in the lock.  He closed the gate behind me as I left with a smile and wave.


At the top of the locks we knew was another honesty box.  This one is my favourite as here one can buy the best pork pies I've ever had.  You can see them lined up to the left of the gent.  We left with two pork pies and an apple pie!


Following us up the 5 locks was a Norton Junction hire boat with a crew of 7.  This gent from the hire boat help us with the 5 locks and chatted away. They were returning and had to get the boat back by tomorrow.  We had a real good natter whilst working the locks. Sorry I did not get his name but if he reads this, thank you sir we are most grateful.

On the way to Market Drayton we passed through Bretton Cut.  Whilst leafy and covered by tall trees its nothing like the narrow Grub street cutting however, story goes Bretton Cut is haunted by a wailing banshee so old workboat skippers would not linger here.  We didn't hear the banshee but one can easily see why it spooked the old boaters.  Must be quite eerie at night.


As we approached Market drayton we passed this line of mooring that reminded me of Golden Nook.  As you can see, the weather was starting to close in and soon after this photo it started to drizzle with rain. 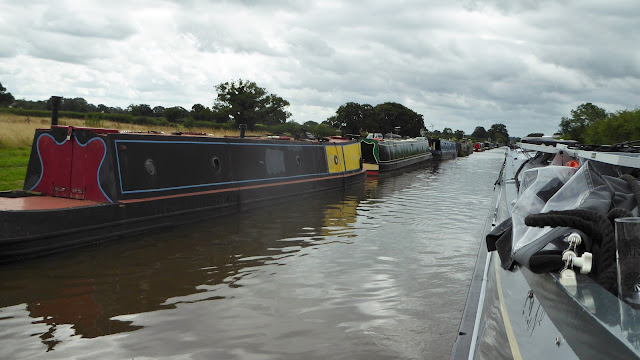 In Market Drayton the Bretton Bridge visitor moorings were quiet and we moored up with only 3 other boats.  Shortly after mooring up we had a visit from friends Carl and Sam who own nb WhyFry. We've not seen them for a good while so spent the afternoon catching up and talking about the sad news of Fernwood boats demise.
Unfortunately Chris and I forgot to take photos so apologies again.   Later we all went into town for a meal in wetherspoons.  You can now sit at a table and using their phone app order and pay for your food and drinks while seated and it is then served directly to you.  How's that for technology!


The forecast for tomorrow is appalling with rain and strong winds heading our way.  We have decided as we are sheltered on our mooring to stay put tomorrow and ride out the storm.  Hope everyone else out there stays safe. 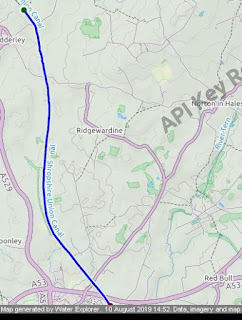