After yesterday's marathon run we only had a short stint to do today so a lay in was in order.  Listening to the rain on the cabin roof was no incentive to get up either.  Still Smudge was walked and we got underway by 10am.  I togged up in full wet gear whilst chris wisely stayed below.  There are not many photos of the run as the view out of the cratch window was limited.


This arm is only navigable  as far as the Dudley Tunnel.  Combustion engines are not allowed in the tunnel.  The good news is there are trip boats that run through some of the tunnels.  We got one one trip boat and were issued with hard hats.  Standing up in these tunnels would not be an option.

The tunnels ar only just wide enough for the boat with head room so low the driver had to squat down in places.  After a while in the tunnel we entered an open chamber with no roof.  The ferns and Lichens hanging from the walls made it feel a bit like being on the Africa Queen, but cold and wet instead.
This large chamber had several tunnels leading off it.  So boaters would not get lost the tunnel to the exit had a lamp mounted at its entrance to the chamber to show the correct exit tunnel.  Hence the saying Light at the end of the tunnel.


On into more tunnels dimly lit by red or white lights.  At one point the boat was stopped and volunteers asked to have a go at legging the boat.  I have always wanted to try this so got my chance.  It is quite hard work but once you got the boat moving it was not too bad.  We only legged the boat for 10 minutes and we felt the strain.  Glad we did not have to do this for the whole two miles of the tunnel. 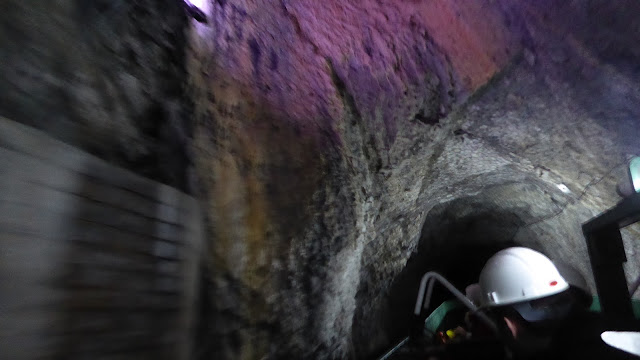 At about 3,172 yards (2,900.5 m) long, it is now the second longest canal tunnel on the UK canal network today.In 1959 the British Transport Commission sought to close the tunnel but this led to an Inland Waterways Association-organised massed protest cruise in 1960. The tunnel was however closed in 1962; and was further threatened with permanent closure by British Railways who wished to replace a railway viaduct at the Tipton portal with an embankment and a culvert. However, this never happened as the railway was closed in 1968 and the disused bridge demolished in the 1990s.

The tunnel was reopened in 1973, as a result of restoration, which had been a collaboration between local volunteers (originally the Dudley Canal Tunnel Preservation Society, later the Dudley Canal Trust), and the local authority, Dudley Borough Council. The opening ceremony was advertised as "TRAD 1973 - Tunnel Reopening at Dudley".

The earliest part of tunnel system was built to help with the transport of limestone extracted from the mines inside Castle Hill through which the tunnel runs. This was Lord Ward's tunnel, which leads to Castle Mill Basin. From there the main tunnel runs, via the Cathedral Arch, to Parkhead, near Netherton. At Cathedral Arch a branch canal led into the Little Tess Cavern mine workings. This route is now blocked, but has been by-passed by two new tunnels (see below). The southern end, including the southern portal, of the tunnel had to be rebuilt in 1884 due to subsidence caused by adjacent coal mines. This section of the tunnel was built several feet wider than the original tunnel bore. The southern portal bears a brick date stone of 1884.

Another 1,227-yard (1,122 m) canal tunnel at Castle Mill Basin, now blocked off by a dam, leads under Wren's Nest to two under ground basins, east basin and west basin, and was used to transport limestone from the underground mine workings. Surface quarries were also opened; they outlasted the underground workings and were last used in the early 1920s. The land above the underground workings, together with the surface quarries, became a National Nature Reserve.  A survey taken in the 1800s find over 40,00 boats passed through the tunnels.  At one point there was a two day wait to go in!


After a trip through the tunnel we enterred the museum itself.  First stop was liunch of traditional fish and chips fried in Beef dripping snd served in paper (sadly not newspaper).  I have to say it was delicious.  The fish perfect and the chips so tasty

Next we visited the local garage.  I could not believe how many old cars are here, all of them in perfect running order. In fact the garage is a replica of Beans car factory.  Beans used to be bigger than ford in the day and there Thunderbolt took the land speed record at 354mph.

In First World War Bean prospered from military contracts to supply shrapnel and shell cases to the government. The company's factories were expanded in order increase production. By 1916 Bean was making about 21,000 shells a week. After the war George Bean was knighted for his wartime service and his son Jack was made a CBE.

After the war Bean needed a product to replace the gap left by the end of military contracts so Bean entered the increasingly active car market by becoming a car maker. The manufacturing rights for the pre-war Perry car[4] were for sale so in January 1919 A. Harper & Sons & Bean bought them for £15,000, giving it a quick entry into the car market. It set up a new factory in Hurst Lane, Coseley, to make the chassis, which were then driven to Dudley where the company's Waddams Pool works built the bodies.


In this shop you can buy cakes and biscuits.  One cake caught my eye, Lardy cake! I have good memories as a young boy holidaying in Weymouth and one highlight of the holidays was a big slice of Lardy cake.  We could not resist and bought some.  It tastes just as good as I remember it did.


As you can see from the photos the rain did not let up all day.  It has now finally stopped and the forecast for tomorrow is dry so we'll continue our exploration of the Stourbridge ring and the Netherton tunnel. 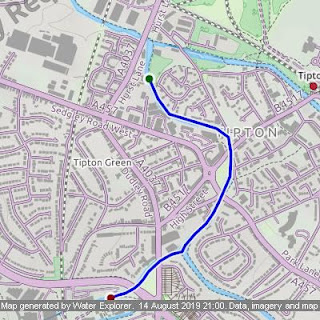