We rose at our usual time and got all the morning chores out of the way.  We were underway at 9:30am.  When cruising we use a program called Navvigator that uses a GPS puck to record our journey.  This morning the communication between puck and laptop refused to work so a manual method of pen and paper had to suffice.

Those of you who have been watching Celebrety 5 go barging may recognise the boat behind AmyJo.  In one episode the 5 were invited aboard "The Rum Wench" for a drink.  Not being celebreties we didn't get an invite :-)

We retraced our steps back through Tipton junction to Factory Junction where we turned right and up 3 Factory Locks.  The morning was not too warm with a chill in the strong breeze but we were blessed with sunny spells that felt warmer.


After Lock 2 we waited for a hire boat to come up the bottom lock.  Its crew were from Amsterdam and were videoing and photographing just about everything.  Despite the lock being in their favour Chris had to perwade them they could come up first.  Apparently at the beginning of their holiday they had been told by a boater that private boats have priority over hire boats and had turned the lock against them whilst they were at the bottom of the lock.  Chris put them right and helped them up.


After the locks we continued on the BCN new main line.  This section is as straight as an arrow and you can see for miles.

As more canals and branches were built or connected it became necessary to review the long, winding, narrow Old Main Line. With a single towpath boats passing in opposite directions had to negotiate their horses and ropes. As traffic grew the locks at Smethwick Summit were still a constriction.

In 1824 Thomas Telford was commissioned to examine alternatives. He famously travelled the route of the Old Line and reported the existing canal as:

"… little more than a crooked ditch, with scarcely the appearance of a towing path, the horses frequently sliding and staggering in the water, the hauling lines sweeping the gravel into the canal, and the entanglement at the meeting of boats being incessant; whilst at the locks at each end of the short summit at Smethwick, crowds of boatmen were always quarrelling, or offering premiums for the preference of passage; the mine owners injured by the delay, were loud in their just complaints."

Telford proposed major changes to the section between Birmingham and Smethwick, widening and straightening the canal, providing towpaths on each side, and cutting through Smethwick Summit to bypass the locks, allowing lock-free passage from Birmingham to Tipton. Telford's proposals were swayed by the threat of a new Birmingham to Liverpool railway. His suggestions were accepted and he was appointed chief engineer on 28 June 1824.

There is not much of note along the way but occassionally interesting places appear like Caggys Wharf and a mosque over looking the canal.

As Dudley tunnel became un navigable for motorised boats a new wider Netherton Tunnel was dug.  We reached the Netherton Junction and turned into it.  It is still a mile and a half to the tunnel.


The approach to the tunnel passes under the BCN old Main line that is carried by a double arched Aqueduct.  There is no indication of which arch to use so as practise is to use the right hand side of the cut I passed through the right hand arch. 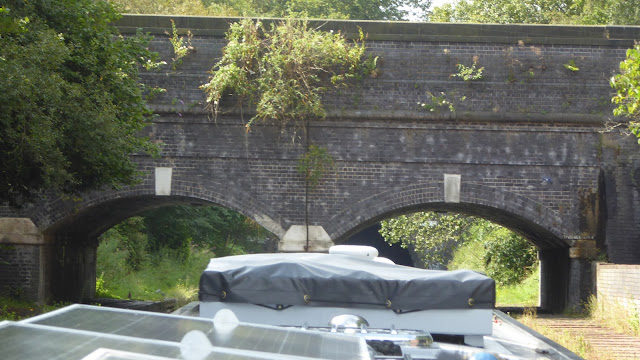 Netherton Tunnel was the last canal tunnel to be built in Britain during the Canal Age. The first sod was turned by the Lord Ward on 31 December 1855 and the canal opened on 20 August 1858, providing a waterway connection between the Black Country towns of Netherton and Tipton. It was built to relieve the bottleneck of the adjacent Dudley Tunnel which is very narrow, has alternating blocks of one-way working, and had waiting times of eight hours or more, and sometimes several days.

The Netherton tunnel was built with a width of 27 feet (8.2 m) to allow two-way working of narrowboats, is 9081feet (2,768m) long; and is brick lined throughout. It has towpaths running through it, one on each side, which enabled horse-drawn narrowboats to be pulled through it. Chainage (distance) markers are still visible on the Eastern wall. The tunnel was fitted, from the start, with gas lighting over the towpaths, though this was later converted to electricity and it is now unlit.

The air vents that run along the line of the tunnel and provide ventilation, and a shaft of light into the canal, are known by the locals as "pepper pots", because of their shape. They are brick-lined and the openings are covered by an iron frame or grill. The wide bore and good ventilation mean that boats using the tunnel today are allowed to use the power of their internal combustion engines, which is prohibited in the narrower Dudley Tunnel.

The tunnel cost £302,000 as opposed to the £238,000 estimate prior to construction. The main reason for the project being overbudget was the extra works necessitated by the condition of the ground through which the tunnel passes.  It is the second longest tunnel on the network, Harecastle being the longest.

After the graffitied urbanisation of Wolverhampton the cansl now reverts to a more rural one.  Banks are manicured with short cut grass, bridges of iron are well maintsined in their black and white paint.  Overall there is an air of pride in the maintenance of this section.

So far our route has been taking us back towards the Dudley tunnel South portal at Park Head Junction.  Here is a very tight left turn.  to the right leads up 2 locks and the tunnel.  I started the turn to the left and found a lock gate withing feet of the turn.  I had to reverse back round the corner to left Chris off and set the lock.

This lock is a deep lock at 12 feet so whilst I descended in AmyJo Chris got talking to two young ladies that had been following us.  They had quite a chat and followed us for some time after the lock.  They must have walked for miles.
A few more miles and we came to the waterfront.  This is a new looking area with lovely moorings, shops and pubs.  This seems a really nice area, so much so there is a notice board with a code of conduct!  Sadly like most areas the Waterfront too suffers from shops and bars closing with many boarded up.  We found a nice spot to moor up and this evening had a meal in the Breirley Hop Tap pub.  We'll stay here over night as tomorrow we have another raft of locks to do, 9 Deft locks and if we cannot moor 16 Stourbridge locks. 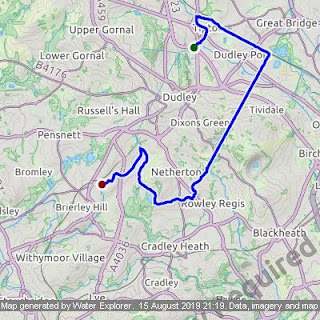