A dense mist shrouded the moorings this morning, everything was damp and a cold stillness was in the air.  As we were only 100 feet past the water point I reversed AmyJo to the tap and we managed two wash loads and refill the tank before boats started to arrive.

We got underway about 10am having only seen one boat heading up the locks which put them in our favour.  The crew even left the gate open for us on the lock as they passed us.  After our long run yesterday we are ahead of schedule so a shorter run was planned for today.

We are now heading through 26 locks to Middlewich known as heartbreak hill by the old boaters.  After our long day yesterday we did not intend to do more than 10 before stopping.


We made steady progress as most of the locks were in our favour save a few that needed topping up because the bottom gate leaked.  It was quite pleasant working in the overcast sky and cool air.  The mist slowly lifted as we went and the cloudy sky made things more comfortable for working the locks.


At lock 50, Lawton Lock, we descended the lock and when the doors opened we were confronted with a hire boat that had gone in the lock below and was half way up.  The pound between the locks was barely long enough for AmyJo with no room to pass without us moving aside.  As luck would have it I managed to exit our lock and with inches to spare managed to reverse AmyJo into the exit of the defunct lock adjacent to ours.  With Amyo's stern backed up to the derelict bottom gates there was just enough room for the hire boat to pass.  With all the concentration to avoid a bump we did not get any photos except this one.   The derelict lock is the one on the right.


One of the features of this stretch of the Trent and Mersey is that all the locks are duplicated as can be seen below.  Telford's idea was boats could pass each other in either direction without being held up.  For us pleasure boaters its the same, reducing queues, however, it seems as time goes by more and more of the locks are becoming derilict and unusable, leaving only one lock operational.  A sign of the lack of funding C&RT are faced with.  Such a shame.

After Nine locks done and the prospect of another 10 if we could not moor up we decided to stop at Rode Heath.  Just as we finished tying the lines the sun burst through the cloud and the temperature started to climb.

After a brief walk into the village for provisions it was time for refreshments in the Broughton Arms.  Later Chris phoned them to book a table as we could see the pub was very busy.  Having been told they were not taking any more bookings but we could turn up and if a table was free we could be served.  What they didn't tell us until we turned up at 7PM they had stopped serving food 10 minutes earlier.  No choice but to eat onboard.  Beef pasta bake and a bottle of Murdei was had in the cratch.


Today we heard some very sad news on facebook.  A hire boat has sunk in Wharton Lock which is near where we are heading when we're near home.  Thankfully the crew are safe but the rudder appears to have caught on the lock cill causing it to tip over as the level dropped.  The canal is now closed until the boat can be recovered which may take several days due to the remote location. Just goes to show how easy things can go wrong folks so please do take care and don't be rushed at locks.  Luckily we are a few days away before we reach the lock so hopefully the boat will be recovered by then.  Our thoughts go out to the poor crew who have had their holiday cut short. 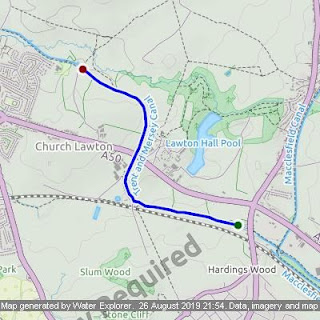 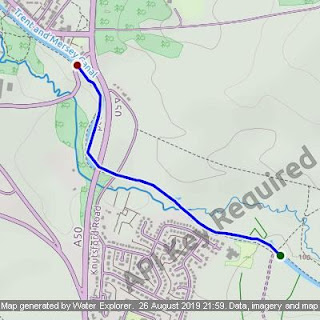