This morning we needed to fill with water so moved the short way along to the water tap.  The boat in front was waiting to descend the lock.  By the time it was our turn we had filled the tank so moved along to be next.

Within minutes of moving up 4 boats turned up, however, there was only room for two boats behind us so two had to breast up.  This itself caused more of a problem as they breasted up alongside J.D. narrowboats wharf which also had boats breasted up, so now the cut was completely blocked off by boats.

The poor crew of the hire boat that had just come up the lock had nowhere to go and the other boats did not seem to move to clear a path through for them.  As the photo shows mayhem ensued.  We left them to it and we descended the lock grateful not to be amongst them.


Today was to be another day of locks, 10 in all, though nicely spread out to give a rest in between.  One of the benefits of having worked so many locks this trip is my blood pressure seems to have improved imesurably.  Before it was regularly 150 over 100 or there abouts, but now for the last week its dropped to 125 over 80 though we're not really sure why, perhaps the lock wheeling has had the desired Cardio exercise needed.  We'll be keeping an eye on this over the next few days as I may have to adjust my blood pressure tablet dosage and will be taking advise from our doctor.

The canal is quite nice here with plenty of nice gardens backing onto the canal in little groups between hedgerow lined towpath.


At Penkridge we were going to stop for some shopping.  We were told it was market day today and so when we got there all the moorings were taken.  We decided to carry on until we found a lovely spot opposite the Moathose hotel on the outskirts of the town.  We had just finished tying the mooring ropes when AmyJo was invaded by ants from the towpath.  We quickly untied and moved on again.  Fortunately only a few ants managed to stow aboard but these were soon dispatched.

We had the same problem finding a mooring at Acton Trussel a bit further on.  I guess we have been spoilt by the Stourbridge ring having hardly any boats on the circuit and could pick our choice of moorings.  Now we're back on the main 4 countries ring we should expect things to be busy with boats everywhere and many more on the move.  Its a bit like being on a motorway in rush hour again.  Its taking a bit of getting used to.

As we left Acton Trussel we passed a familiar boat.  nb AreNAre aka the HomeBrew Boat was here but not trading.  We hailed Barry and had a brief chat as we passed.

At Park gate lock is the Midland Chandlers though we did not stop as we didn't need anything.  The boatyard and wharf looked busy and we could hear plenty of work going on.


We passed this beautiful new canalside property with lovely garden.  But what set this property aside from other canalside properties is it has its own mooring wharf in its own arm off the canal.  So wish we could live there!

There were plenty of fishermen out today as a competition was taking place.  I slowed to tickover and was thanked by many.  We were just coming to the last few fishermen when one hooked a large fish as we approached and was trying to land it.  We were getting every close and it looked like we might runover the line and the chap would loose the fish which was putting up a fair fight.  I put AmyJo into reverse trying not to rev too much and this slowed us just enough for him to land the fish.  He thanked us for being so conciderate and delighted in showing us the fish.  A good sized Perch.


At one garden we spotted Bill and Ben the Flower pot men, so this is where they retired too!  During their TV career they took on many guises, puppets computer generated and amimated. My fav though was the original puppet series...... weeeeed.

We eventually found a nice mooring spot between bridges 93 and 94 at 2pm.  Its out in the country and far enough away from the M6 as not to be too noisy.  With the sun softening behind hazy cloud I took the time to to a spot of polishing and finished of the port cabin side and rear doors. 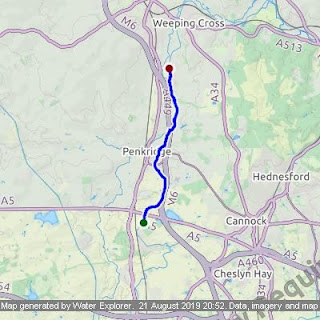