On our Summer Cruise Day 1 Shady Oak to Barbridge

We're on the move again.  Schools out for the summer break which means Chris is off work too.  This means its time for our annual summer cruise.

Whilst Chris was working to keep me in the manner to which I am accustomed, I made a few more upgrades to AmyJo's Victron system.  Up to now our battery monitor was tucked away on the Datalink box in the depths of a narrow cupboard.  Getting to it was not easy and I was not happy with it as it was not working as it should.

Following Del and Al on Derwent6 (http://derwent6.blogspot.com/) I replaced the battery monitor with a new one that has built in Bluetooth so now I can see whats happening from my iphone.  I wanted this one to be more visible so after moving the central heating control over to the left I fitted it in the space created.

I connected everything up and powered on.  All was well, the BMV was working showing the correct readings, however the colour control display (CCGX) was not showing the inverter.  I double checked all the connections to no avail.

After several diagnostic attempts and after upgrading the firmware to the latest release, Victron recommended I contact a local Victron rep and they would replace it under warranty as the VE.bus interface was no longer working. Not, I might add, due to anything I had done.  We think it had gone a few days before and had not been noticed

Up to now we had been moored at the Shady Oak pub but needed water so we decided to move.  Colin, our Victron engineer assured me the CCGX controller would be with him today so he would meet us at Barbridge.

Its only a short run to Wharton lock but as we arrived a boat was just entering so we joined them and locked up together. 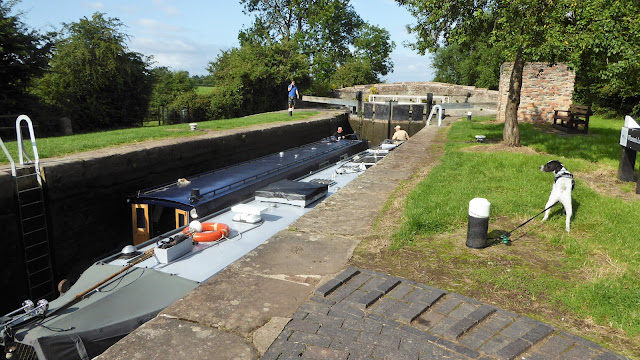 
There were the usual queues at Iron lock and our lock partner asked if I wanted to pair up with him in the lock.  I politely declined adding it was foolhardy to go in with two boats.  My advice was ignored and he locked with another boat only to get his bow stuck on the upper gates cil flooding his well deck.  Tragedy barely averted they tried again only for the other boat to get wedged.  After much filling and emptying they managed to get up to the scorn of the other boaters waiting to descend.  We followed on our own, as did the other boaters. No photos to show I'm as Chris was busy opening and closing paddles.


At Stone Lock a smokey haze was emanating from the lock keeper's cottage garden and a lot of activity was seen.  Seems as of last Wednesday the cottage has new owners who intend to renovate and extend it making it into a 4 bedroomed house.  I do hope the extension is sympathetic with the original style.

At Tilston lock the other two boats had already gone up so we reset the lock.  Once in the lock Chris took this photo.  AmyJo looks tiny in the double chamber.  We found that if both upper paddle were opened 50% AmyJo would sit comfortably without swinging about.

At Bunbury we passed one of the boats that attempted Iron lock and at Anglo Welsh yard were relieved to see hardly any boats moored up.  The other Iron lock boat was moving into the lock and Chris informed me two were descending and to hold off.

Today we had two volunteer lockies on.  One of the boats was only a 30 footer so, unusually, the lockies insisted the boats motor over diagonally to the opposite side of the next chamber instead of moving forward then roping the boat over.  Much to the annoyance of the elderly crew of the second boat accompanying the small boat


To add insult to injury the second boat got its stern line wrapped round the prop so the locks had to be completely emptied to get it off.

Whilst all this took place Smudge did what he does best and found the biggest log he could then settled down to chew it.  Its a wonder his mouth isn't full of splitters (we do check). 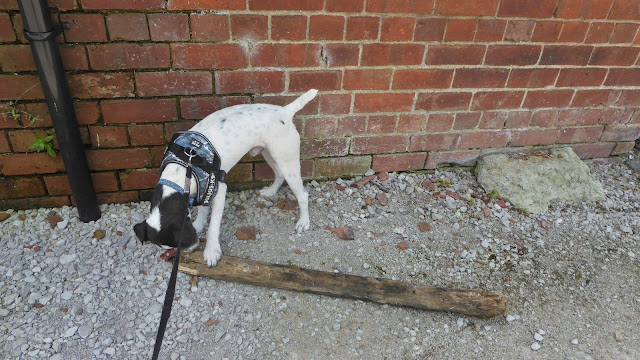 Having dealt with novice, ignorant and indignent boaters the pair of lockies could finally stop for a well earned cuppa after we cleared the locks.  These guys give up their free time, without pay to help you down the locks, they don't have to, but they do, so please, do cut them some slack heh!

We had a good run down to Calverley services where we disposed of rubbish and topped up with water.  Just before heading off we spotted this day boat moored outside the Cheese factory and was across the cut.  clearly the stern line had come adrift.  By the time we reached it willing hands had recovered it.

A clear run to Barbridge saw us moored up outside the Barbridge inn.  A call from Colin, the Victron engineer, told me our colour controller had been received from Victron and he was on his way to us with it.

And hour later it was installed and up and running.  Colin runs his business from offices above the Cottages by Taylor's dry dock in Chester.  He can be found at http://offgridhappy.com/. I can highly recommend him. 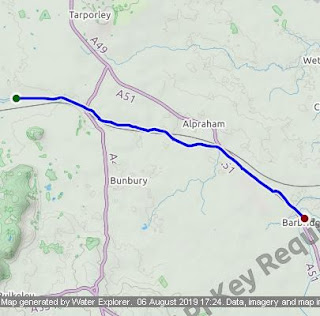