I was woken by the cabin boy opening the curtains whilst a second presented me with a tray of silverware and a porcelain plate.  Various choices of breakfast was shown for me to choose.  "Full English please Geaves" I replied in responce.

"We are just entering Monte Carlo harbour and the crew would like to know, do you want to anchor in the bay or should we alert the harbour control you wish to moor alongside in our usual berth?"

I was about to reply but was suddenly aware of a cockadoodling of a Cockerel that was getting louder and louder.  Coming to my senses I realised I was back in AmyJo's bedroom, it was 5am and Monte Carlo and my floating Gin palace was just a dream.  Oh well back to reality.  Damn that Cockerel!

After sorting out the morning chores we got underway at 9am.  Gnosall is a delightful place and is well maintained.  The boat inn is charming and well worth a visit.  All the gardens here are neat and manicured.  Even the tow path is lined with bark chippings.


Leaving Gnosall behind we soon passed through the 81 yard long Cowley Tunnel, unique as its the only Tunnel on the Shropshire Union canal.  One wonders why the navvies didn't just cut out the rock like the rest of the cutting.  On leaving the tunnel the shear height of the rock shows why.

On through Chamberlains Cutting, a much wider one than those we passed through already. Then to Talbot Wharf.  A line of long term moorings precede the wharf and some moorers have a good sense of humour.

Talbot wharf has two buildings remaining, one belonging to Cadbury the other now a very desirable home.

We passed little Onn via another cutting, this time Rye Hill Cutting. Several aqueducts give clearings in the trees to give glimpses of an abandoned wartime aerodrome now repurposed as a pig farm.  One gets a sense of solitude when cruising through these cuttings as, although the canal is often straight for miles, one rarely sees another boat or signs of people.  Just us and AmyJo on our own, luverly lubbly


On the Outskirts of Wheaton Aston is a garage selling red diesel.  This IS the cheapest on the network at 68.9p for domestic rate.  Naturally we stopped and topped up AmyJo's tank.

Once filled we carried on to Wheaton Aston Lock which was busy.   We are finding that boaters have a great sense of humour around these parts.


We found the home of Punch and Judy having evicted Rosie and Jim, or had croc eaten them?

Facebook narrowboat groups have been buzzing that Wheaton Aston lock leaking real bad and that it may need to close for repair.  Its still usable at the moment but its clear the bottom gates are suffering and will need something done soon.  The gates are out of alinement and do not meet properly.  There is a poor seal to them and almost as much water pours out as is let in by the paddles.  Needless to say filling the lock is a slow affair.

Safely through the lock we cruised on to Stretton Wharf.  I'm sure in the series "a narrowboat is born" the boat Dover was bought for restoration from here but I could be wrong.  There are several old working boats here including this lovely little tug called Sam. 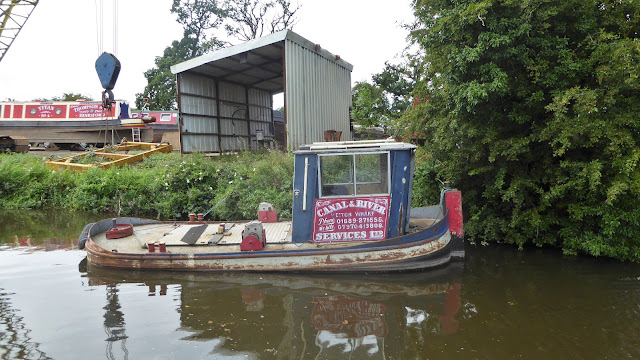 Just after Stretton Wharf is Stretton Aqueduct.  I posted about this when we did our big cruise from Crick.  I have lost count the number of times Chris and I have driven under it on our way to and from Essex so were delighted to be cruising AmyJo over it once more.  Sadly it is now more rusty and overgrown than the last time we crossed.

The Aqueduct is a short cast iron canal aqueduct between Stretton and Brewood.  Designed by Thomas Telford and bearing his name plus its date of construction, 1832, it carries the Canal 30 feet (9.1 m) over the road.

During 1961–62, the road under the aqueduct was lowered by about 4 feet (1.2 m) to allow taller vehicles to pass underneath.


It was one of Telford's last aqueducts and has been grade II listed since 1985.

Eventually we arrived at tonight's destination, Brewood (pronounced brood) at about 2pm.  The moorings were busy with boats moored for lunch in the Bridge Inn.  I managed to squeeze in on the last mooring.  Barely half an hour later the moorings almost emptied as boats continued on their way.


After lunch we took Smudge for a wonder round the village.  Its not large but pretty for it.  A small Co-op store provided us with milk and bread along the way.

According to Wikipedia the name Brewood is a mixture of two elements. The first element is the British word 'briga', which appears in modern Welsh as 'bre'. This is the most common of a number of Celtic place-name elements signifying a hill. The second element is probably obvious: the Anglo-Saxon 'wudu', signifying a wood. Hence the name Brewood means either "Wood on or by a hill" or "Wood near a place called Bre".


Speedwell Castle is an ornate folly. Architectural styling suggests a date somewhere in the middle of the 1700s, perhaps around 1760 according to Wikipedia.  Little is known about its Architect but its thought to be Thomas Prichard who worked nearby.  It was reputedly built by a local apothecary William Rock, using the winnings from betting on the Duke of Bolton's racehorse, Speedwell. (An alternate story is that the builder owned an unsuccessful racehorse, and said that he would build a castle to celebrate if it ever won). After a period as the home of the classics master at Brewood Grammar School in the second half of the 19th century, it became a reading room in the late 19th century. It was then used as shops and storage until the 1930s, when it was converted to residential flats.

Tomorrow we bid farewell to the Shroppie and hello to waters new for AmyJo as we continue our journey south.  All will be revealed in tomorrow's post. 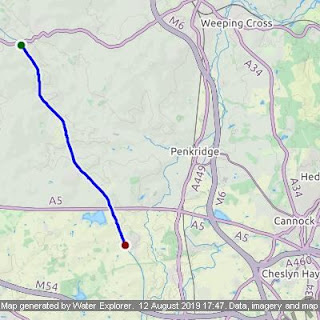