I woke early this morning a 6am.  I got up and crept about so as not to disturb Chris who surfaced at 8am.  Chris has this thing about not getting up before 8am when not working.  Only exceptional circumstances will get her out of bed before then.  Today was not one of those.

While I readied AmyJo for cruising this beautiful looking boat cruised past.  Hardly a mark nor spot of rust on he.r  Her proud owner informed me she was 14 years old and they were the 3rd owners.  The name then caught my attention, wish I'd thought of that one!

Now we often get some very nice remarks ourselves about how lovely AmyJo is from gongoozlers and boaters alike when we cruise, but never before have we been watched by a jury of Crows.  I know it should be a flock of crows but there were 12 and each one studied us as we passed. They Squawked amongst themselves like they were passing judgement as we passed.  Wonder if they approved too?

After a while we came across a group of fishermen.  It looked like they were setting up for a competition so I asked one if this was the case.  He grinned and said "Yes, but this is only a practise for the big competition in September,  There will be over 80 fishermen  along here then!"  Guess its worth avoiding this stretch in September then.   Think he said around 8th September or thereabouts.  Surprisingly all the fishermen were quite friendly today, not something we usually experience.


We soon got to pass by Overwater Marina.  This marina always looks impeccably manicured with cut grass, tarmacked roads and paths and not a weed in sight.


When we reached Audlem bottom lock there was one boat waiting to ascend.  Its single handed owner was already resetting the lock.  Chris helped him through and the reset the lock for our turn.  We got through the first three locks with boats descending so made good progress.

The water point at the visitor moorings was free so I pulled on and filled with water.  This boat was moored behind with some superb watercolour paintings and post cards.


The water did not take long and we soon got underway again without loosing our place in the queue and, as I pulled off, a boat left the lock ahead, yippee!.

Chris still needed some salad stuff so I moored up again above the Shroppy Fly and Chris went into to town for the shopping.  It was good to see the wharf crane back in situ having been removed to be restored.  It now looks as good as new

It was now 11am and the sun was getting quite hot so we stayed put and had a spot of lunch then continued up the flight refreshed with water and food.

Way back in November whilst wasting time on Facebook I came across the Stickmaker's page  He makes walking sticks with very detailed animal heads so asked him if he could make me one.  Today I got a message saying my walking stick was ready and this photo of it was with the message.  Yes its Smudge and I have to say we're delighted with it!  Though the photo does not do it justice.  We'll have to wait until we get back from the cruise it see it for real.
With the sun heating up the day more and more we continued up the flight with boats descending at each lock

The great thing about Audlem locks is that the lower gate parapet has steps on the both sides leading up from the water.  This meant I could let AmyJo drift in and armed with the centre rope could get ashore to stop her, close the gate my side whilst Chris shut the other.  We could then both work the paddles making less work for Chris.  We worked this way all up the flight.  Sadly half way up we ran out of descending boats so the last 7 locks we had to turn in our favour.

Just before lock 3 this lovely boat called Hakuna Matata was waiting for us to leave the lock.  His roof was festooned with numerous tiller pins.  Must take him all day to polish that lot.  Inside is just as shiny too.  I think he must like Brass.

By now Chris, Smudge and myself were feeling the heat so gratefully pulled into the visitor moorings between locks 2 and 3 at 3pm.  We settled the boat on its mooring then all three of us dozed for the rest of the afternoon.  Others must have felt the same as only 2 boats passed us before dinner time. 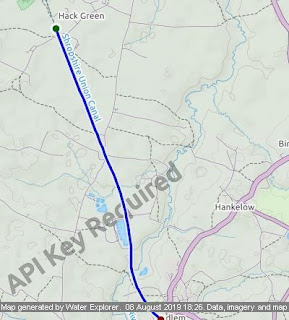 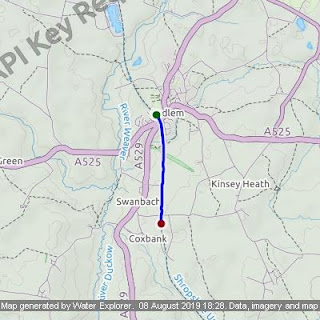 It's a murder of crows! or a parliament of rooks maybe.
We met Wearytired the First at Crick last year I think. He was a bit cross their idea had been nicked by so many others!
best wishes
Debby