A boat tearing past us at 7am woke us up so we rose early and was underway by 9am after the usual dog walking duties, Smudge sensing it was early did not get excited when I said the magic word instead lay down on me for a cuddle.  He got 5 minutes then we were out the door.


The canal is quite open here and the morning sun was warming up the chilly air by the time we were on the move.  For me this is the best time of the day, when AmyJo glides past the other moored boats, its still sunny, and not many people about.  Its so peaceful.


A little way down the cut we passed these two boats.  They look like they have been there a while as their stuff was cluttered all over the tow path including unwashed pots and pans from last nights meal, and a fridge, working, placed outside the bow.  I had to pick my way through it all when I walked Smudge last night.  I'm not being judgemental and each to their own but how can people live in such conditions, do they have any pride left?  I don't want to offend so please no comments decrying what I post, its merely and obsavation.


We only had two locks today, the first was Detmore lock.  We arrived just as a boat was leaving below so we turned the lock.  We seem to be having all the locks against us this trip.  Whilst in the lock a small terrier type dog sat on the back of a chair in the conservatory barking at us.  There was no attempt by the owner to stop it or see why it was barking.  They must be used to it each time a boat passes.  Mind you its a pretty good guard dog in that respect.


At Baswich we found some moorings near bridge 100a and stopped for some shopping.  Just up the road is an Aldi so we managed to get food in for the week.  Once we stowed that we got underway again.

We passed a neatly gardened mobile home park with an interesting garden clearly set up as an adventure playground for the kids, complete with zip wire down to an elevated den.  Bet the kids have a whale of a time playing there.


A bit further on we came to a fantastic house in large grounds.  Clearly the owner is an avid gardener.  I am pretty convinced I saw none other than Alan Titmarsh wielding a spade in the grounds but was too late to get a photo.


We had been following a couple on the boat in front for some time.  The canal has some sharp bends and as we rounded one we found them hard aground, presumably because of the two boats we passed going the other way.  It was clear he could not budge so I eased up to them and they waved me past.  I asked the guy if I gave AmyJo some throttle as we passed it might help to dislodge them and they agreed.  Sure enough as we powered past they came unstuck much to their relief.  Not sure if that was the correct thing to do in this case but as he did not want to be towed off he was happy to try it and it worked.

Rounding another very tight bend we were confronted with this aqueduct.  Good job we were going slowly as I only just managed to get round by adding a little reverse to swing round and line up.  This takes the canal over the River Sow.  I wonder how many boats misjudge the turn as its quite tricky

Our final lock of the day was Tixall Lock.  This too was against us but the crew of the boat that was aground arrived in time to help Chris work the lock.


Tixall wide was only 5 minutes after the lock.  As we approached we could see it was busy, however, we found a fairly good spot but we had just passed it slowly.  Ahead boats were moored for some way.  I reversed back onto it and we settled AmyJo on her mooring lines for the night.  We later found out it was the best spot with the best view of the Gatehouse.


After some lunch I set about sanding the primer I'd applied on the Starboard side doors.  Up to now we had been mooring on the port side so I have not been able to finish the painting.  After a touch of wet and dry to smooth the primer I was able to get a coat of undercoat on the treated areas.  After that I spent a couple of hours cleaning and polishing the cabin side.  I've got half way down and will finish off next time we moor up.

Tixall Wide, also known as Tixall Broad or The Broad Water, is a body of water that forms part of the Staffordshire and Worcestershire Canal near Tixall in Staffordshire, to the south of the former Tixall Hall.

The lake was probably created during the construction of the canal in 1771. At that time, the hall was owned by Thomas Clifford, the fourth son of Hugh Clifford, 3rd Baron Clifford of Chudleigh, and the grounds had been designed on the advice of the landscape architect Lancelot "Capability" Brown. It is said Clifford "gave permission for the canal to pass through his land on the condition that it was made ... wide enough to look like a lake from the house", and thus in order not to spoil the view.

The towpath is a very popular overnight mooring spot. Boaters moored here, or just passing through, have an excellent view of the magnificent Elizabethan gatehouse that is the only remaining part of Tixall Hall.

It has also been suggested that the canal was routed to utilise a lake that already existed.  We'll spend the night here so tomorrow we leave the Staff and Worcester canal at Great Haywood and turn left onto the Trent and Mersey canal. 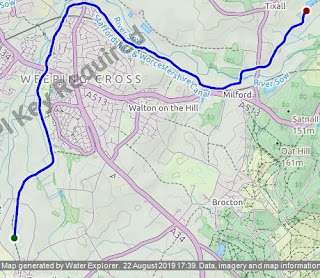