Hazy sunshine greeted us this morning and not a breath of wind when we left.  A half an hour run took us to Great Haywood Junction.  Here as one approaches are two narrows with a passing place in the middle.  As we got near we could see a succession of private boats passing through the narrows and a young couple in a hire boat sat for ages in the passing place waiting patiently to move on. no one of the boats let them through.  I brought AmyJo to a stop before the narrows and waved the young couple on. They thanked us as they passed and I added" you have waited long enough so I thought I'd let you through"   This bought a big smile to their faces.


Those of you that know the Shroppie at Bunbury will well know the problems when Anglo Welsh boats are on the wharf below the staircase.  Great Haywood junction is no different.  In fact today Anglo Welsh had conveniently parked their longest boat nearest to the Bridge 'ole making getting through tight.

Shortly after the junction is Great Haywood marina, part of the Lakeland Leisure group with Tattenhall marina.  Linear moorings (moorings along the canal) line both sides here so progress is slow with careful passing required.  The marina itself looks quite full and one boat we recognised, "Lizzy Dripping"  used to moor at Tattenhall.

From here on the canal passes into the countryside.  Apart from the villages of Little Haywood and Weston-on-Trent close to the canal there is not much to talk about.  Fields of sheep and cows line the route and the canal is kept company by the railway close by and the A51.  In places the railway runs right alongside the canal.   Only three locks, Hoo Mill, Weston Lock and Sandon Lock break up the monotony.  At each one we met up with the other boats following us.  At one point four boats queued behind us and two in front.

At Sandon Lock a boat went in ahead of us.  It seemed ages, with no sign of the lock being let down when eventually Chris asked me to come and help remove some reeds from the lock and to bring a boathook.

When I got up to the lock I could see why.  A massive clump of reeds sat in the lock.  It took 3 of us plus two passing gentlemen to haul the clump clear.  It took a while and all our strength to get it to the bank and away from the lock.


By now the cloud had cleared and the day was becoming quite warm so much so the shorts were brought out of retirement.  After Sandon lock we continued into the countryside with the railway and road never far away.


At bridge 88 we were surprised to see a bull and cow cross the bridge as we passed under.  When we got to the other side we discovered why.  They were crossing the bridge to reach their watering hole by the canal.

Passing Aston Marina we came to our last lock of the day, Aston lock,  no differant to any other lock along here except Aston Lock marks the mid point of the Trent and Mersey Canal.  A mile stone proudly proclaims Sharlow 46 miles behind us and Preston Brook 46 miles ahead of us.

Eventually signs we were approaching Stone began to apprear with some pretty nice properties lineing the banks  Neatly trimmed canal sides accompany the new builds with executive cars parked as if on show in the drives.

Aproaching the town centre we passed lines of moored boats on the visitor moorings above Stone Locks.  Boat after boat we passed and we begsn to loose hope of finding a mooring and having to moor in town near the noisy pubs when just before the winding hole we found a spot in the shade.  It means we won't get much power from the solar panels but at least we are out of the heat of the sun. 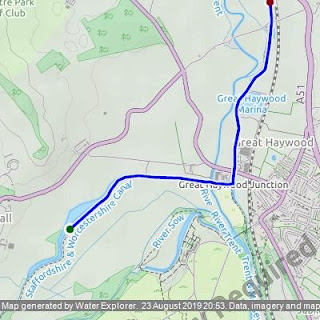 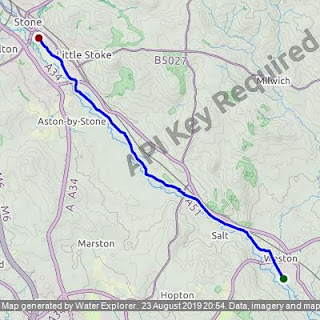