I forgot to add yesterday that Chris's camera, that we use for the blog photos, finally gave up the ghost and stopped working.  The zoom lens motor has packed in and now the lens is stuck in the extended, zoomed, position.  We thought something was wrong when some of the photos were coming out blurred over the last few days.  Good job I have a similar camera, though and older version, which we brought out of retirement.

We left at our more usual time of 9;30am continued our descent of heart break hill.  Today would see us descending another 14 locks.  First were the two Thurwood locks, the second of which had one of the pair in our favour.  My apologies for the poor quality of the photos as my camera has lens problems and hence why it was retired.

Already the morning was heating up even though there was a hazy sun.  Today though the heat felt more humid so made progress quite tiring.  We took it steady and made good use of a newly purchased resealable 1 ltr drinks bottle.  Couple of ice cubes in that and we had a ready supply of cool water to hand all morning which was most welcome.

Last time we passed through here we talked to a gent who had just bought this lock cottage and was going to renovate and extend it.  Now its finished and looks delightful.  Most of the extending is to the rear and side and tastefully done in keeping with the older part of the cottage.  The grounds are now laid out with a large seating area to watch boats pass by.


After Thurlwood the locks pass out into the countryside as a grouping of 2 sets of locks each with duplicate locks along side.  As I mentioned sadly more and more of the pairs are becoming single locks as the others are not repaired due to lack of funding.  Such a shame as one rarely sees a queue at these locks.  Mind you its gone very quiet again today as we only passed two boats going the other way and we caught up with a single hander ahead of us. I know the holiday is over but there seems to be fewer boats on the move each day.

After passing down Peirpoint locks we then descended the next group of six, Wheelock locks.  These pass through remote countryside and nearby village of Malkins Bank.  Between lock 62 and 63 one sees a side bridge that used to be used by the huge Brunner-Monde works but now used by a boat builder.  The works is long gone and new golf course buries what remains below its greens.  New housing here makes the place look nice and lock side houses have nurtured gardens and the occassional owner watching on with a cheery wave and smile.


Smudge loves working the locks with Chris rather than staying on the boat and now he is older has gotten to know the routine, so much so he can be left off lead when in out in the country and away from roads whilst we work the lock.  He patrols between Chris and the lock side checking we are both OK and rarely wanders far, though has had the occassional stray and has to be called back.  On this occassion Chris worked AmyJo and I the lock.  Chris got this cracking shot of him checking AmyJo is OK.   Apologies for the blotches in the photo, as I said my old camera was retired and for just this reason when Chris got hers.


As mentioned some of the locks are in disrepair and it seems the next lock has been so for some time,  Its been out of service so long its now being used as the by wash.

Having descended Church locks, Halls lock, and the Lawton locks we arrived at our last lock of the day.  By now the heat and humidity was getting to all three of us, Chris took a breather sitting on the lock beam whilst it filled.  Unusually, once in the lock, Smudge asked to come aboard and when lifted onto the hatch flopped down and slept the rest of the way.  The heat must have got to him too.

We found a nice spot to moor up just before the village of Wheelock at 1:30pm  and after a refreshing drink the three of us crashed out and slept the afternoon away.  A short sharp shower brought us to our senses about 4pm but that lasted only a few minutes.  While Chris pottered about I then caught up with the blog.

Tomorrow we'll be back on more familiar turf as we complete heartbreak hill and swing onto the Middlewich branch to complete the four counties ring. 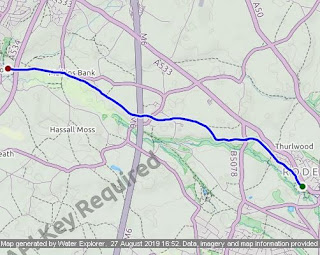