We left our mooring at the usual time of 9am and into our first lock of the day a few meters way, Bumble Hole lock.  The name suggests something from the hobbit or Harry porter film but the tired looking lock keeper’s cottage was definitely not from the set of a film.  Sadly, the owner, now bed ridden, is unable to maintain the cottage.


After a mile or so we then came to Bratch Locks.  These locks were once a staircase but now are 3 separate locks in close succession.  Today, a lockie was on hand to assist boats up the lock.  The instruction board gave clear instructions so, with two boats ascending ahead of us, Chris asked if we could enter the locks.   Good job I did not hear his reply as he would have got a mouthful from me.  His reply to Chris was “of course not there’s a boat in the lock”, quite male chauvinistic we thought.  His demeanor was the same all the way up to the ladies on the other boats too, barking his commands to leave open or close paddles and gates.


Whilst waiting for the lock an elderly gentleman informed me this was the first time he’d seen a queue at these locks in years.  He then informed me that during WWII the Germans had tried to bomb the nearby water pumphouse but missed and bombed his dad’s farm fields.    He then elaborated that very large boulders had been placed across the road to stop tanks and that after the war they had been rolled into the side ponds and were still there to this day.   Although fascinating I had to give my apologies to him as the lock was ready for me.  He was still chatting away as I entered the lock and the gates closed but I could no longer hear him! He must have thought me quite rude but the lockie was getting impatient.  He certainly won't be on my Christmas card list thats for sure

The bottom gates of the lower lock would not stay shut so a simple device was applied to keep them closed.  A loop of rope hooked over a loop on each gate, simple but effective, however, one had to traverse the lockbeam to apply it.  I reversed AmyJo up to the gates to hold them shut whilst Chris applied the loop of rope.  I'd have thought this a job for the lockie but hay ho.

At the top of the locks this little Octagonal building used to be a toll house, now its used to sell post cards and canal memorabilia. We continued our way through the countryside and three more locks, Awbridge, Ebstree, and Dimmingsdale in sucession.  All neatly maintained and hardly a dribble from the gates 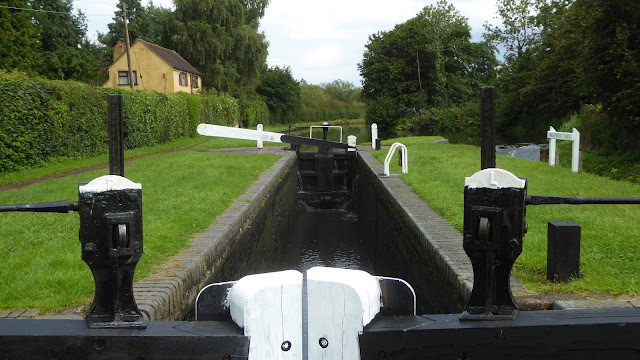 As the afternoon wore on large black clouds began to appear and head towards us.  At Ebstree lock the heavens finally opened and a downpour of rain descended upon us.  This time Chris managed to keep dry in her thin Regatta rain mac.  Poor Smudge got soaked and just sat looking dejected as the lock filled.  We kept him below while we carried on until the rain stopped.  A couple of rumbles of thunder was heard nearby but after an hour the sun was back out again.

With everything now wet and still more rain clouds looming we descended the two Wightwick locks and moored at Crompton.  Later in the afternoon and in dry weather we strolled into the village and got some shopping.  I then tried to do the blog but we have no internet here.  The boat uses 3, I have EE on my phone and Chris’s phone is on TalkMobile but none have any signal so my apologies for this late post.