What happened to Day 11 I hear you ask?  Well as you know it was a complete wash out.  Strong wind and rain from the moment we woke up until to the moment we went to bed.  Even Smudge kept his walks to a minimum.  In short the day was yuck!  We simply pottered about, mostly chilled and stayed put.

I spent the day trying to get our GPS tracker, Navvigator to work.  I completely reformated the PC disk, reloaded Windows, and all the needed software but still the open port error kept occurring.  No matter what I did it would not work.  Finally, just before going to bed, I tried it one more time.  It worked!

This morning we got AmyJo ready to cruise.  I turned the PC on and with trepidation turned on the the GPS and, yay, it worked again.  Smug with success I got underway.

There is a sense that this area has been extensively redeveloped.  The cut is clean and lined with concrete banks.  Mooring rings are plentiful if always, for some reason, on a curved stretch of the cut.  To the left is a huge retail park.  I wanted some fuses from Halfords which was at the far end of the complex.  It took me a full 20 minutes to walk from one end to the other yesterday.  The centre covers 2 floors and is clearly popular with the locals.


Not long after leaving the Waterfront complex  we arrived at Delph Locks.  It was clear a boat had not long descended as the locks were against us, we thoufght it was one moored in the basin that left early this morning.  The first lock is right under a busy main road.  I got to wondering how they managed to remove and replace the gates as, being quite deep, there clearly was not enough head room to crane the gates out.

After pondering this for a while I noticed two groups of three loops in the underside of the bridge .  Clearly these are so block and tackles can be used to edge the gates in and out so a crane can lift them.


At the second lock we could see down the flight and our assumption was confirmed,  three locks down the afore mentioned boat was descending, so now we would have all the locks against us. 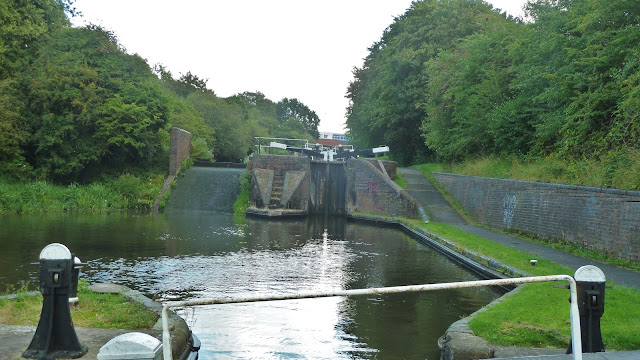 Progress down the first two locks was slow.  There is only one ladder in the chamber to climb out and its in the middle making it difficult for me to climb out to help Chris.  Coupled with the fact the only way across the lock is on top of the lock gate, squeezing past greasy lock paddles mid way.  Added to this there is no access below the first lock for me to walk up and close the other gate for Chris, though there was at the second lock shown above..

I had just commentated we don't get lockies helping us down locks like they do on Celebrity 5 Go Barging when, as we entered the third lock, we could see two CRT volockies (volunteer lockies) walking up.  Both then helped us down the rest of the flight.  One reseting the lock below and the other helping Chris at our lock.  This made our passage down the flight much quicker and easier from then on.

If there was a prize for the most helpful and cheerful volunteer lockies then Steve and his companion must get top prize.  They work Tuesdays and Thursdays during the week and Saturdays at weekends. They work with only one cuff key between them and CRT will not buy them a second.  A cuff key is used to unlock a pin that stops the paddles being wound up, it also known as an anti vandal key.  As we worked with them Chris lent them one of ours for which they were truly thankful.  If we could have got another one close by I'd have gladly bought them one as a thank you.  We have met many volunteers on our travels but none quite as freindly and cheerful as these two.

After Delph locks the canal twists and turn sharply at times through suburbs, some neat some unkempt as is the canal in places.  We soon reached Leys Junction at the head of the Stourbridge Locks.  Steve had told us the boat in front was heading for Kinver via these locks so, windlasses in hand, we stealed ourselves to reset all 16 locks as we descended.


Chris was beginning to find the locks too hard to work so I insisted we switch roles, I lock wheeling and Chris handling AmyJo (I like her to keep her hand on the tiller through locks now and again anyway).

This change was quite timely as the next two locks were unusual.  Whilst they were two seperate locks, only 10 feet seperated them.  Took me a little while to work out how to set them.  Leave the bottom lock top paddle open and let it fill as the lock above empties.  When the lock above is down the levels should all be equal so top gates of the bottom lock can be opened.


After this we swapped back as we wanted to moor up below the next lock and Chris didn't want to do this.  As I pulled off I felt something wrap itself round the prop.  My third visit down the weed hatch of the day revealed nothing.  It must have freed off as I stopped again.

Below lock 12 is the Red Cone glass factory and they have convenient moorings on the offside outside their factory.  Time for some lunch in their cafe.  Toasted Cheese and Ham sandwiches can be recommended here.  Kathrine if you read this get Alan to bring you here you can try all sorts of crafts, and their shops are full of the sort of things you would like.


Finally after 3 more locks we reached the bottom lock to find hoards of paddlers of all ages below the bottom gates.  Below the lock is the junction to the Stourbridge arm and the paddles were directly in our path once we cleared the lock.  I got Chris to check with the instructor if it was ok to lower the lock as I feared the turbulance may overcome the less competant young paddlers.  The instructer got the paddlers to move into the arm out of the way but two wanted to ride the turbulance as Chris emptied the lock.  They thoroughly enjoyed it.


We had planned to got down to Stourbridge but the staff at the glass factory informed us the moorings would be very busy with boats for the coming Glass festival next weekend.  We decided to give it a miss this time.


The next few miles of the canal becomes quite narrow and reedy,  I was just thinking good job it is not busy when a boat rounded a bend towards us.  It took some slow and careful manouvering from both of us for them to pass.  In fact we are very surprised that today we have only seen three boats on the move all day.  This stretch from Wolverhampton is so quiet, hardly any boats about, moored or moving.  Just the odd long term mooring here and there.  If you want quiet then do this ring!


By 5pm we reached the last locks, Stourton locks, before the end of the Stourbridge canal.  There was just room for us to moor up before the lock landing and so we gratefully moored up, exhausted having done 25 locks, every one against us, but happy having enjoyed the Strourbridge canal.

Tomorrow we set off on our last leg of the Stourbridge ring and meet back at the top of the Wolverhampton 21 where we started it.  We'll then continue up the Staff and Wocester canal back to Autherley Junction. 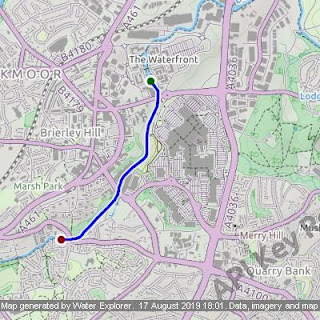 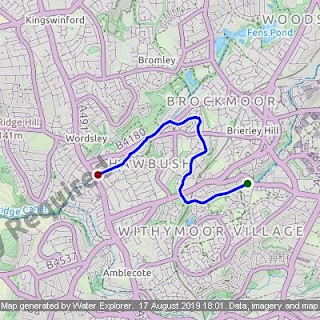