After yesterdays rain the weather was good to us today.  This morning was quite warm when we left the mooring.  Just after the bridge are some nice apartments with moorings.  Might be a good place once we finish with boating, but hopefully thats a while off yet.


At Tettenhal we passed under Tettenhall Rail bridge.  Sadly no longer a rail bridge it is now part of a walking route.  Tettenhall railway station was a station on the Wombourne Branch Line, serving  Tettenhall. It was opened by the Great Western Railway in 1925 and closed in 1932. A significant number of station amenities were supplied but failed to improve patronage at the station, which ultimately led to its closure.

The station site is a rarity in that, despite the removal of the line 33 years after the station closed, it is almost totally complete.  Since 2014, the building has been home to a tea room named 'Cupcake Lane' having previously been a park ranger station. The goods depot behind the station is now a small transport museum.

The station is also the start and the northern end of the South Staffordshire Railway Walk which carries on down towards Wombourne railway station and onto Gornal Halt railway station.


A few miles on and we came to Aldersley Junction, here is where we started our journey up the Wolverhamton 21 locks and the Stourbridge Ring.  So, having completed the ring, we now start our trip back on the four counties ring.


Soon after that we arrived at Autherley Junction.  This nearby bridge has some sort of remains of a building or wharf,  The low wall leads to what looks like a fireplace.  The coping stones along the top of the walls may have been added later but make one wonder if a roof had existed once.


These huge populars line the perimeter of a school.  Last time we passed these the school was in session.  We are told the populars were planted to stop the pupils staring out of the windows at the passing boats.


Next is another one of my favourite places, Pendeford Rockin. This is the name used by old boatmen. Here the canal narrows to  a point just wide enough for a narrowboat to pass through the solid Sandstone carved away by Telford's Navvies.  At just over a mile and a half there are one or two passing places and having traversed two thirds through we met an oncoming boat.  Luckily for us he pulled into a passing place and we could continue, thanking the other boater for letting us pass.


From here on the canal is far from straight.  There are some pretty tight corners to negociate but the scenery is pleasant as it passes by so plenty to keep you on your toes.


At Hatherton Junction, one could be forgiven to think the canal junction is a tee junction.  In fact the canal turns sharp left here.  Clearly some have made the mistake of turning right but would find after one lock the Hatherton canal finishes with some moorings, the rest having fallen into disuse.  There is a restoration trust that hopes to restore this canal and link up with the BCN at Norton Canes that would almost boost traffic that way.  The BCN is under used so this would give it much more traffic should it come to fruition.

At Calf Heath we came across this boat, looking very similar to AmyJo.  Infact  without the dome and Solar panel boxes she would have passed for AmyJo.


We found a lovely place to moor before Gailey lock between the trees so we could take advantage of the sun on  the solar panels.  It was so nice we got the chairs out and had lunch on the towpath.

When it cooled down a bit I got the polish out and gave the cabin a bit of a clean.  I have got some Farekla G3 dirt remover.  Spray it on and wipe off then wax polish.  Its amazing stuff and got dirt off the paintwork as easy as anything and is quicker than washing the boat down, the dirt lifted of as I sprayed.  I managed to clean and polish the whole side in an hour. 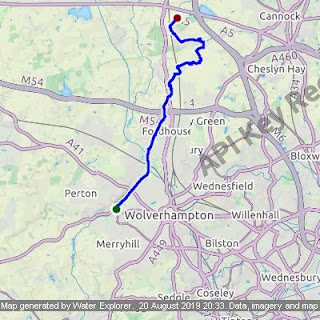