After yesterday's downpour this morning was bright and sunny if a little chilly.  We wanted an early start so were underway by 8am (yes that's early for us!)

Leaving Brewood we leave the lovely ornate bridges behind.  From now on they become more formal and in some cases flat and modern.

From here on the canal is mostly straight as a dye with the occasional turn.  It alternates from wide open stretches to narrow one boat width sections.  Fortunately the only boat we encountered was the one behind us that we let overtake as he was following fairly close.  I hate that and would rather let them pass than worry I'm holding them up.

We arrived at Autherley junction and stopped at the Napton hire boat base for a pump out.  Chris wandered off into the shop and bought a new tea towel and another copy of Pearson's we need.

The end of the shroppie is blocked by a stop lock that drops all of 6 inches.  This is typical of many stop locks and companies could conserve water and charge fees to the work boats which helped maintain the canal and gave the companies nice proffits.

Once through the lock I halted AmyJo just outside the gate so Chris and Smudge could get on board.  There was at least two feet between the bank and AmyJo.  I was edging forwards towards a bank that would be much closer when Smudge decided time to get on board, however, Chris was not prepared for his jump so his lead brought him up short of AmyJo's deck.  Splosh, the poor boy had an impromptu swim and was unceremoniously dragged out of the cut by his harness.  He was bundled below and Chris dried him off.  He was unhurt by the affair and resumed his lookout post on deck later.

At the junction one can either turn left onto the Staff and Worcester canal towards Great Haywood or right to head south towards Stourbridge.  As we have a few weeks left before we have to return home I swung AmyJo to Starboard and we headed off on new waters for us towards Stourbridge.  Our plan being to do the Stourbridge ring, a shorter version of the Stourport ring.

Just after the turn the canal runs under and along several railways, this one runs over a pair lofty viaducts.

A mile or so further on we arrived at Aldersley junction and another turn this time to the left put us onto the beginning of the Birmingham Canal Network (BCN) but first there was the matter of the Wolverhampton 21, a series of locks the would raise us up 132 feet and into Wolverhampton itself.

These locks are all single locks with small double bottom gates.  In order to help Chris I could step of as AmyJo entered the chamber and using the centre rope stop her in the chamber, shut the bottom gate my side whilst Chris shut the other, and then we could open both paddles.  This halved the work for Chris.

The first few pounds were really low so it was tick over and mid channel to the next lock.  On arrival Chris would open one gate and inching AmyJo VERY slowly up to the other gate I found with a brief touch of throttle AmyJo would gently nudge open the other gate with her bow button.


Using our routine we made steady progress up the flight meeting the occasional boat descending.  At lock 12 four CRT volunteers were at hand, though were of little use as they just stood chatting after opening the top paddles leaving us to do the rest.


A part from the odd industrial estate or factory the locks are surprisingly rural with trees lining the canal.  The locks are easy going and are not as hard to work as the Audlem locks.  In fact I could close one bottom gate by hand standing on AmyJo's aft deck whilst in the chamber.


Finally we made it to the top lock!  It took us 4 hours in all.  Whilst the lock filled a lady started asking about the boat and how much it costs to live aboard one.  She was fascinated by what I told her.

After leaving the locks the area is quite pleasant with a small park and moorings.  We had been advised the better moorings were through the road bridge.  We carried on and found some moorings on the offside inaccessible from the nearby road or towpath so quite secure.  We did think of stopping but found it rather noisy with traffic so decided to carry on.

Carrying on we passed groups of new development side by side with old warehousing and office blocks.  It looked quite pleasant but like all cities everywhere you looked there was graffiti and litter.  The millennials blame us for leaving our planet in the state it's in but from the look of the amount of rubbish left in and around the canal there is little hope for the future especially in the cities.

From here on in the canal twists and turns to weedle its way through the urbanisation.  This is the BCN old line and instead of numbers the bridges all have names like,Bilston Road, Cable street and Rough Hill Rail.

As we progressed the canal water got progressively clearer.  So clear in fact we could see the bottom and mounds of weed, beer cans and general city rubbish.  In fact the weed is starting to fill the canal with only a clear passage mid channel.  I had to stop twice to descend the weed hatch and pull wrapped weed off the prop shaft.

As we passed through a foot bridge known as ten Score a group of young scrotes took pot shots with catapults at the front of AmyJo hitting her twice.  I returned fire with my catapult and the barrage  quickly ceased.  We could see heads bobbing up over the bridge parapet as they made good their escape.  Later a check revealed no damage to the paintwork.

Next we passed through Coseley tunnel, a wide tunnel with towpath both sides.  We could see a group of young cyclists with their father at the entrance and followed them into the tunnel.  They stopped at the other end and we could see the youngest crying.  Seems he did not like the tunnel one bit and had to be persuaded to enter by his dad.

Our route tooks us to Factory Junction that is near the Black Country museum.  Its only a short detour and it would be wrong of us to pass it by.  So we swung AmyJo to the right at the junction and headed towards Tipton


By now the water was crystal clear but still very weedy.  In places we passed new housing with neat manicured canal bank and then into reedy narrow channels.  We eventually arrived at Tipton and found a nice mooring on the off side for the night.


The water is so clear here we can see AmyJo's baseplate and anodes.  Looks like the blacking is doing its job and is not too bad.  I guess we'll know better when she's hauled out.

Its been a long day so we're going to settle down and enjoy a much needed drink or three.  Tomorrow we are going to move on to the Black Country museum for a look round then we'll retrace our steps back to Factory Junction and continue our journey. 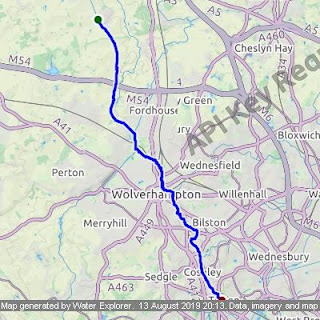 You may be posting in arrears, in which case this may be irrelevant. But if as I assume you are going through Netherton Tunnel, a more interesting way of getting there than retracing your steps to Factory Junction, is to go along the Old Main Line, crossing the Tunnel branch on an aqueduct, and then going down Brades Locks, the only staircase on the BCN. You can then turn left and left again and go under the aqueduct you've just been over.

Watch out for fish tomorrow! You can usually spot roach and rudd, and we've seen perch and even a pike along the old main line round Dudley
Debby