We were woken by another early bird passing us at 6am and another at 6:30am. I do wish if people want to travel at silly o'clock they fit decent silencers to their engine, one of them was loud enough to wake the dead. I laid awake in bed until 7:30am then got up.  We were underway by 9am.  A shorter post today I'm afraid as rain put paid to many photos.

Chris wanted to do another wash load so as the water point was close by we stopped to top up and use the washing machine.  There are two water points here, both empty when we pulled up.  A wash load take 30mins so we sat on the water point until the washing had finished and tank full.  I was just getting underway when two boats, one in either direction, arrived wanting water so our timing was perfect.

The morning felt damp and heavy clouds covered the sky.  It soon started to drizzle and got progressively heavier as the morning went on so the camera was kept in the dry so apologies for the lack of photos.

As we approached the railway bridge we noticed a long freight train and a passenger train both going in the same direction very slowly.  Chris just had time to get this photo before we passed under them.


By the time we descended the 3 Booth Lane locks the rain was quite heavy and we were soaked through.  The crew of the boat behind did not want to do the locks in the rasin and had stopped.  We, being soaked through, decided to carry on and dry off when we moor in Middlewich. One boat was well ahead of us and they reset the lock as they left for us so it it was ready by the time we got to it.

We find keeping the pram hood up and lowering it for each bridge a pain so now we leave it down and use a golfing umbrella instead.  It doen't keep the back completely dry but it does greatly reduce the wet inside.

Using the golfing umberella works really well and I found I could use it hands free by tucking the handle down the front of my rain coat.  However this backfired when we passed under a very low bridge.  To late to remove the umbrella I had no choice but to crouch right down.  Chris reckons I looked funny and the photo is proof.  We did have a giggle.


After Rumps lock the rain finally eased off to just a light drizzle.  We descended Kings lock and pulled onto the chandler's wharf for diesel.  It was a bit tight getting in but we got the stern in enough for the hose to reach while the bow rested on the bow of one of their new builds.  They are quite laid back here letting me fill up myself.  They asked how many litres and never checked the pump themselves.

It was gertting busy at the junction so when a boat pulled into Whardle lock I followed and waited in the short pound below.  Once a boat coming down passed AmyJo we locked up and found a mooring between bridges 29 and 30 a short way on from the lock.

We hear so much about how good the Fish & Chips are at Kings Lock chip shop and have been through here several times since we've had Amyo but we have never had the chance to sample the chips here, so tonight its a chippy tea. Can't wait! 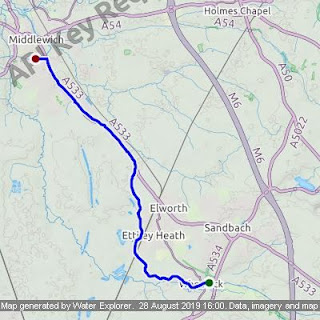