You get two posts for the price of one today as we had an evening out for a meal.  When we got back it was too late to blog.  Aren't you lucky we're so generous :-)

A bright start this morning, much to our relief after yesterday's rain, in fact it stayed pleasant all day.  The morning felt much warmer as the breezy winds had subsided over night at last.


Hardings wood is an unusual junction in as much as you pass over the Trent and Mersey on an aqueduct  and then for a while it runs parallel with it, then swings round to meet it.  Two locks on the T&M below raise the canal to meet our part of the junction and turning left we then use these locks to pass under the canal we just traveled on.   The Map below should make it clearer.

First one crosses over the Trent and Mersey then a tight left turn and a run parallel.  Finally another left turn brings you out at the junction proper.

The turn is quite tight and there was only just enough room to swing AmyJo round to line up for the first locks.  There is actually a mooring opposite the junction and I was glad no boat was on it!


We found all the locks are duplicated, that is two locks side by side.  This was to improve traffic flow during the busy working boat days.

At the second lock, 42, is a memorial to one Mikey Sutton.  Seems 19 year old Mikey took up a dare by his 13 year old friend to jump the lock.  Apparently Mike almost made the jump successfully but slipped smashing his chin on the opposite lock wall as he fell into the empty chamber and then drowned.  Such a shame.

From now on the locks would be in pairs except one or two that were now singled due to dereliction of their partner lock.  Most were against us so we had to turn each one in as we descended.

Working together, I would help Chris shut the heavy top gate then open one paddle getting back aboard AmyJo before she descended too far.  Once I was aboard Chris would then open the other paddle.  We got into this routine and we worked well together for the next few locks.


An uneventful cruise down the locks was had with only one boat coming up all the way.  Nearing Mow Cop in the distance we finally stopped at some lovely moorings above lock 53 and had a meal in the evening at the Broughton Arms canal side pub.  At £10.45 for a 10oz Rump steak it was good value too!


According to Wilipedia Mow Cop Castle is a folly at Mow Cop in the civil parish of Odd Rode, Cheshire, England. It is recorded in the National Heritage List for England as a designated Grade II listed building. The ridge, upon which the castle sits, forms the boundary between the counties of Cheshire and Staffordshire, the dioceses of Chester and Lichfield and the ecclesiastical provinces of Canterbury and York. 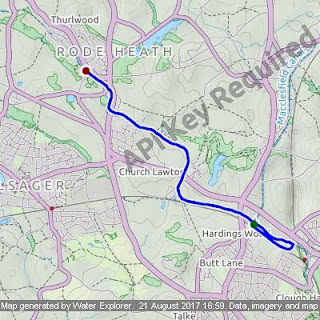 This morning dawned grey but warm and stayed that way all day.  We rarely saw any sunshine at all for the grey cloud .  Today we continued our descent of Heartbreak hill starting with lock 53.


It was clear we were near C&RT offices as the locks around here barely dribble unlike those further way.  Again we adopted the same working pattern as yesterday so making lighter work for Chris.


Today we were in luck as more boats were on the move and after our first three locks another boat with a crew of four had caught us up.  Between their crew and Chris we managed to make better progress, we even set one paddle for the boat behind us who were most grateful, helping Chris shut our gates in return.   Until, that is, we reached lock 62.  This is a single lock as its neighbour has now been filled in.   The boat in front of us, despite being well manned, was taking a long time to enter each of the the following lock chambers slowing everyone down.  No matter for us of course but the boat behind us was not too pleased about it.

At one lock Nb Cledeu (hope I spelt that right, apologies if not)  passed us, the lady asked if we enjoyed the Macclesfield as she reads our blog.  Sorry we did not have time for a proper chat but it was nice to meet you and yes we loved the Macc very much.  Nice to know we do have at least one reader that enjoys our burblings :-)


After lock 65 at Wheelock we decided to stop for lunch as it was 2pm.  Talking to the moored boat crew in front of us we were informed the moorings were few and far between from here to Middlewich so we decided, again, to stay put for the night.  At least we can keep having our power naps at this rate. 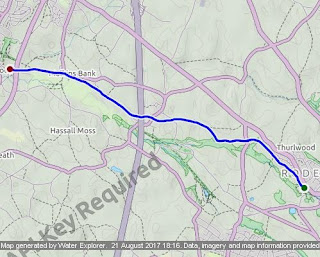