Wow what a noisy night we had last night.  About 1am in the morning the bedroom lit up and a distant clap of thunder woke us up with Smudge barking at it.

We reassured him and he snuggled back down between us and dropped of to sleep again.  By now the rain was lashing down so getting to sleep was not easy.

I have this weird need to watch thunderstorms, don't know why, so I crept out into the observation deck (cover over back hatch) for my fix.  Not long and a massive flash blinded me for a few seconds followed almost instantly by a the most tremendous crash of thunder overhead lasting all of 3 minutes.  So close in fact the thunder vibrated AmyJo from stem to stern for a full couple of minutes.  We think lightning may have struck barely a few yards away, possibly hitting the Mill chimney as the mill was now in total blackout.  My ears were ringing for a good while after thats for sure.  After 3 years aboard this was our first thunderstorm and, I quite enjoyed it to be honest.  Smudge slept through it all of course.

Sleepy eyed we rose at 9am this morning and got ready to cruise.  There was still a light drizzle in the air and after the night's downpours everything was dripping wet.

Our first port of call was Bollington Wharf for Calor Gas.  Brian McGuigan and his team have really smarted up the wharf and Brian was there to greet us


Bollington wharf is a fascinating place with a varied selection of old working boats, including Brian's nb Alton.  With gas bottle replaced we wished Brian well and set off again.

All was going well until we reached Kerridge Dry dock when Chris yelled out "Monkeys overboard!!!"  I still can't believe we actually did this but we put our man overboard drill into practice just for a dog's toy!

You see, the monkeys are Smudge's favourite tug of war toy consisting of 3 soft monkey heads on a rope depicting Hear no evil, See no evil, Speak no evil.  Smudge has had them since he was 10 weeks old.  They are so much loved by him that they no longer resemble monkeys, in fact we now call them the 3 wise mutants.  We cannot bare to get rid of them as he loves them so much.   Turns out Smudge had dropped them by Chris, sat in the bow, to play and they had rolled over the side.


With Smudge running the length of the boat several times in panic for his beloved toy and slamming on the brakes I managed to gently reversed AmyJo back to the toy and using the boat hook fished it out of the cut.

The weather started to improve and the short bursts of sunshine started to warm things up nicely until by mid day we were discarding the wet gear.


Along the way a large over-spill was the fishing ground of a kingfisher that could be seen swooping into the water and flying off into the bushes nearby.  As we passed the weir a black minx, I think it was at least, scuttled along the edge dropping into the water and swimming off.  It could have been a ferret as it looked similar.  Sadly my camera was down below and Chris had not seen it.


Arriving at Macclesfield we were amazed to find the mooring pontoons almost empty.  We pulled in and, as we had not gone into Macclesfield last time we were here, we took a walk into town.

The town is accessed from the nearby road bridge.  We walked towards the Railway station and up into the shopping area.


We walked up a lovely cobbled hill which could easily have been the location for the old Hovis advert. I nearly started humming that well known tune accompanying the Hovis Adverts but refrained.


We found the indoor market in the shopping mall and bought some doggie treats at the pet stall.  We were just leaving the arcade feet from the exit when an obnoxious chap in security uniform called we don't allow dogs in here mate.  I spun on him and retorted "Then its about time you put up signs informing people of that then isn't it"  (there were none on display, we make a point of checking first).

After lunch back on AmyJo we got underway again.  Our goal was the Gurnett aqueduct and a meal with friends in Sutton hall.

We passed this impressive rampart wall though what its purpose was not clear.


On reaching the aqueduct not a spare inch of mooring space was to be had.  The place was full of moored boats all the way to bridge 44.  We even tied to moor after the bridge but to no avail due to silt.  We eventually found a nice mooring 2 miles further on at Lyme Green and moored for the night.  Sadly the meal was not to be and we ate aboard instead. 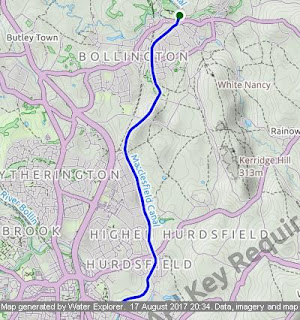 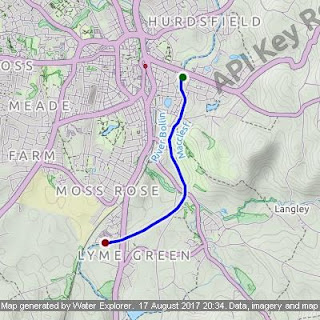 So pleased the monkeys have been rescued, and I'm sure Smudge agrees too. Well done with your monkeys overboard rescue technique.