We don't know why but Chris and I were both awake at 4am.  After the usual sortie to the bathroom we returned to bed and dozed on and off until 8am.  After Smudge's morning walk we got underway under dark threatening clouds but still some sunshine.


Although called Dover Lock the lock itself is long gone though one can still see the remnants of the lock walls and gate housings.  All that remains is the nearby Pub of the same name.  Its moorings brightly coloured bollards made to look like toadstools.


On 16th January 51 year old Jeffery Bridge's dead body was found and pulled out of the canal here.   He was last seen on December 29, 2015, at Wigan Well being and Resilience Center on Charles Street, Leigh.  On January 29, police sent an appeal out, saying he was known to frequent the Leigh and Wigan areas and uses the canal footpaths to travel between the two on foot hoping to find answers.  How he ended up in the canal is still unknown today.

Not long into the cruise and we had a short spell of rain but after that the sky cleared a little and sun came out again for the rest of the day.

The canal here is wide and straight for several miles with not much to blog about.  At Bridgewater Marina we stopped briefly to diesel up and top up with water.  The young staff here were extremely helpful, running out the water hose for us whilst topping up the diesel tank with military precision.  At 75p the price was not too bad but worth it considering the service given.

By 1.30pm we approached Worsley.  We had promised ourselves we would stop here if we could.  I slowly turned under the bridge by the packet house and found only one boat moored there.

We started to pull in behind the moored boat and realised it was nb Serendipity, they had been in Liverpool with us earlier.  They call out they were just about to leave so after exchanging pleasantries we slid back into their place and the only spot in the sun as they left.


After a spot of lunch we took Smudge for a walk round the village.  Worsley itself does not have much to offer its visitors but the village is delightful none the less.  Few shops exist bar hair dressers, solicitors and hotels but the local news agent across the road does stock all the staples like bread, milk, eggs etc.


In the village is a pair of Lime Kilns.  As the Bridgewater canal build started here in 1875 the kilns supplied the lime for construction of the work houses and also to improve the quality of the farm land.  The canal meant the Duke of Bridgewater could sell his coal mined here cheaper to the rapidly expanding Manchester nearby.

Just down the cut from AmyJo are two dry Docks.  The Dry Docks were constructed in the 1760s, not long after work started on the Bridgewater Canal. A variety of new buildings and structures appeared in Worsley as a result of the construction of the Bridgewater Canal, altering the appearance and character of the Village.

We walked through the village housing.  Tree lined roadss with large drives and expensive cars the norm.

Next we walked round to the Packet house and took this photo of AmyJo.  Yes that is the actual colour of the water.  Like that at Harecastle, the water here is tainted with Iron ore from the mines nearby.

The Packet House was a scheduled stop for passenger boats plying the Bridgewater Canal. There were different types of craft employed; the basic packet on the Warrington-Manchester run carried passengers at a shilling a head. The packet service from Manchester to Liverpool via Worsley, Leigh and Wigan took fourteen hours, though meals were provided at a shilling each.

One could be forgiven for thinking, like me, that these arches are the entrances to the mines. 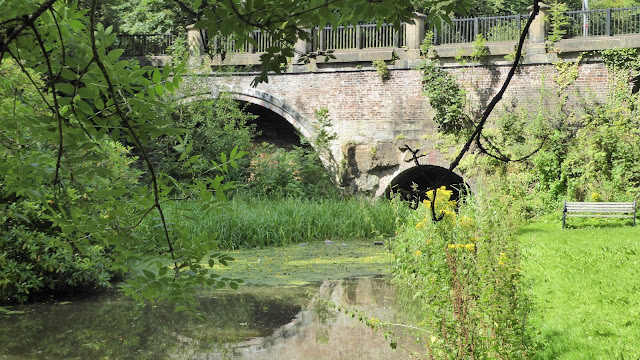 In fact the arches are actually a bridge carrying the A572.  The mines them selves are beyond and are almost impossible to see, however, this is one of the remaining mine entrances, now a barrier keeps people out for safety reasons.

Further on is a large green.  This is the former site of the Workshops for the canal and mines.  Demolished long ago and laid out as a green all that remains now is a fountain that stood at the base of the workshop Chimney as a memorial to the Dukes achievements.

Of interest was a story of the works clock.  It goes that the men were always late for work after their lunch.   The Duke had asked why and apparently was told that whilst the men could hear the clock strike 12 they could not hear it strike one.  The Duke then arranged for it to strike 13 times instead.  The clock now lies in St Marks Church, Worsley and still strikes 13.

An easy cruise today that puts us within easy reach of Manchester city center Tomorrow and new waters yet again. 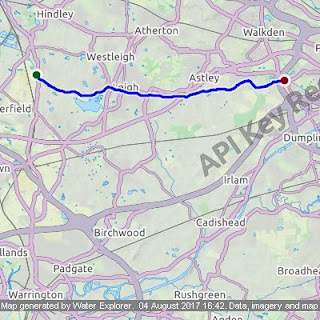 Very informative- especially the story about the clock striking 13! And that Packet House really is a thing of beauty, nothing like it in our part of the world. It's always so interesting what people find as they travel around.
Robin and Jenny, Romany Rambler