9am and a knock on the cabin.  Our engineer from RCR had arrived armed with two new throttle cables.  Fortunately one of the cables was long enough.  Within 30 minutes the new one was installed and we were ready to move on.


Lock 9 passes under the busy A626.  Just after rush hour now but it still took Chris a while to cross over to reach the lock.


At the lock we found this roller mounted on the bridge wall, clearly located so as not to chafe the ropes when horses pulled the boats out of the lock.  Its the first one we have seen set this way and not vertically.


From here on up the locks the view is really pretty. With the sun shining the locks are a great place to be.  We really enjoyed these locks even if they are deep and hard to work.


At lock 12, I think it was, the local kids were enjoying a skate park only they were not on skates but mini scooters.  Kids of all ages were playing together here, the older ones helping the younger ones to learn their tricks.  Some were really good doing high jumps and kicks.  I was so engrossed watching them I failed to notice Chris had opened the lock gate until she called out to me.


At the last four locks we were joined by a growing number of Gongoozlers.  Poor Chris was constantly having to shoo them away from the gates so she could open or close them.  All the while answering a barrage of questions from the interested gongoozlers.  One actually asked if she was the lock guide as Chris manage to answer most of the questions thrown at her.  When the lock was full and I was exiting it with AmyJo I had plenty of willing hands to close the gate behind me.


Finally we locked out of the top lock and needing water we swung on the Macclesfield canal at the junction.  We then winded to return to the water point at the C&RT services.  The water pressure here is quite low and it took nearly an hour to fill.  We took this time to grab a bit of lunch and a cuppa.

Once full with water we returned to Marple junction and turned right towards Bugsworth.  We so so love this arm.  It so beautiful and the views excellent, being so high the canal runs alongside a valley.  One can see hills for miles.

There are three lift bridges along the way, mostly electrified now.  This one obviously has the single hander in mind as the controls are on the opposite side to the bridge on the tow path side making it easy to get through.


After about an hour we reached the junction to Bugsworth and Whaley Bridge.  This time we're headed for Bugsworth.


On arrival at the basin we found our friends Del, Al, Mark and Sian were there with Derwent6 and Mochyn Du too.  The basin was really busy with so many moored boats and not much room left for AmyJo, we even ran aground 6 foot from the bank on what looked like a suitable mooring.  The first arm where Derwent6 was moored was almost empty but a pair of hotel boats breasted up were partially blocking the entrance.  With nowhere else to get in we had no choice but to attempt to get past them.

We tried gently reversing AmyJo in and almost got past the pair but could not quite get right round them getting wedged between a boat opposite moored with full sized car wheels out as fenders, like our anti shelf wheels, and the butty of the hotel boat.  Del then asked the hotel boat owner if he would be good enough move the butty to allow us in but at first he refused arguing he needed the boats breasted up.

As you can imagine I was not impressed with the guy for being so selfish but held my tongue, though I did make it clear it was stupid to block so many empty mooring spaces in the arm when nowhere else was available.  It was not until Del informed him Derwent6 would be leaving at 7am in the morning and he would be forced to move them then, that he begrudgingly moved the butty along allowing us, and other boats later on, to get onto a mooring.  Sadly we were the topic of conversation in the Navigator that night, most embarrassing.  As it happened Derwent6 was not the only boat that left early next morning so the hotel boats would still have been disturbed either way. 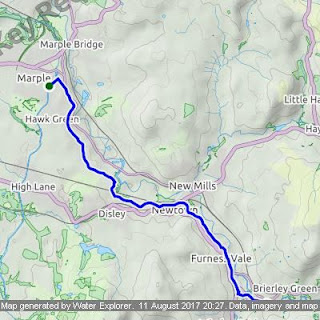