Day 33 Marple aqueduct to not very far at all

It had rained all night and finally stopped at 5am this morning.  I lay awake until 7am then got up (I do so hate laying there staring at the ceiling), washed and took Smudge for his morning walk.  On my return I took advantage of the fact AmyJo was dripping wet from the over night rain and gave her towpath side and roof a good scrub down and chammy leather dry.

As we set off the cloud was thinning and the first signs of sunshine was showing itself, in fact, as the day progressed it improved and warmed considerably.

Just before the aqueduct is a narrow cutting.  It reminded me some what of Grub street cutting on the Shroppy, like that, this too was dark and gloomy. 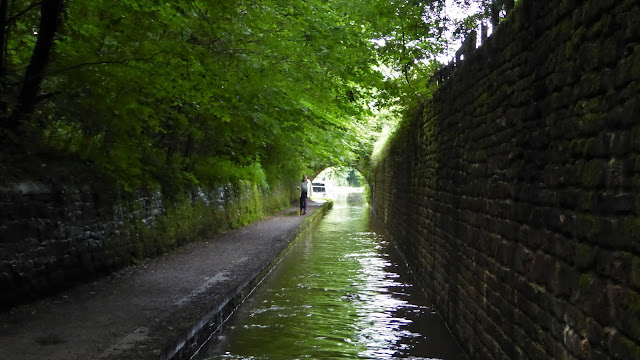 After crossing a wide pound we came to the aqueduct.  From the canal one could easily think we were crossing Chirk aqueduct, the two are almost identical.

After a sort cruise we arrived at the first of the 16 Marple locks.  Our timing was off as the boat passing us going the other way had not come down the locks but had set of from the moorings below.  We found all the locks against us. Not that it worried us, we have a routine where Chris turns the lock in our favour. I motor in and Chris opens the paddles.  When safe for me to step off Chris goes up to the next lock to set it and I motor out of my lock, l close the paddles and gate by which time the next lock is ready to take AmyJo.

The pounds between the locks are quite small so with no other boats about I waited in the lock until called up but used that time to chammy down the other side of AmyJo.

These locks are deep at around 13ft each and are in a lovely setting so different to the last few days, I was finally relaxing again, so good to be back out in the countryside.  The depth of the locks makes the bottom paddles hard going when the lock is full.  Chris has found by placing the windlass up right and pulling down half  a turn then moving the windlass back and repeating she could open the paddles without too much strenuous effort.


Added to the deep locks are the heavy gates that are needed to support the water.  These really work up a sweat to close and do not swing easily.  Bless him, Smudge could see Chris Struggling so without any prompt lent his weight to help.

At lock 5 contractors were out cutting the grass.  The lad strimming worked the offside whilst another cut the towpath side with a mower.  I hovered in the pound until they finished for which I was thanked.  A passer by did stop the strimmer, shouting he should have stopped as Chris was within 15 meters of him.  I was not aware of that requirement when strimming!

All was going well until mid day at lock 7.  I motored in, the lock filled and as the lock was almost full another boat appeared out of lock 8.  We were so glad knowing that now all the locks should be in our favour.  I put on the power to exit the lock and nothing happened, no higher revs and no added movement from the prop apart from a gentle wash.  Back to neutral and tried again, still nothing.  I quickly guessed the throttle cable had snapped so we only had tick over speed.  I managed to creep slowly out of the lock and moor up in the pound.

At 12:15 we phoned RCR and sat and waited.......and waited...... and waited, not a word from them.  Boats came and went all afternoon.  At 6pm I phoned again to be told the engineer is stuck in Church Minshall on another job.  He has just phoned at 9:15pm apologising and that it would be at least 10pm before he could get to me.  In all fairness we had been sat comfortably all day so I reluctantly told the engineer to leave it until morning but made him assure me we would be first call in the morning.  At least I got to polish the Chromium and tidy out the engine room.  In all its taken all day to travel just one mile!

We've been monitoring the pound level all day and it has hardly dropped so we think we should be OK over night.  I've deployed the anti shelf wheels and left the lines slack as a precaution.  The two locks above us leak badly and are filling up on their own.  I figure if needed in the night I can let these down to restore the pound level again.

Whilst waiting I contrived to jury rig the broken cable so that I can manually operate the throttle.  Luckily it broke by the throttle lever so still plenty of usable length left. I slid the cable out of its sheaving and threaded it up through a gap between the back door and the floor panel.   I just gently pull on the loop I fashioned using an electrical connection block and voila we have revs!  Its not neat but it works and may just get me out of trouble should I really need to move.  At least its better than calling for revs to the engine room crew (that would have to be Chris of course!)


So now we spend another anxious night worrying that the pound level does not drop too much, although, the location is quite pleasant it has to be said.  Still one good thing really, the cable broke here and not on the Rochdale 9 or Ashton Locks so I guess thats the silver lining to all this!  Someone is watching over us after all. 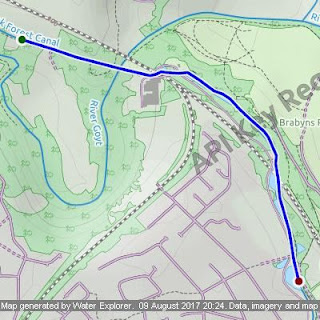