We spent a total of 4 nights in Bugsworth in all.  We so love that place its hard to leave.  On Friday several of the boats moored there including Derwent6 and Mochyn Du, all left so the basin was now looking empty.  Perhaps we should have held back a day.

The tow path at the basin is quite low so it makes it perfect for Gunwale painting.  AmyJo was in need of some fresh paint.  So, with a lovely dry day, I set too and rubbed down the Starboard (right) Gunwale.

I also took the opportunity to treat some rust blistering the paint around the starboard bow fare-lead, which when removed, we discovered was not sealed fully and a small amount of moisture getting in.   I treated the rust with Furtan and let it soak over night.


Saturday dawned wet an miserable and stayed that way pretty much all morning.  By mid afternoon the weather perked up enough for me to wet and dry back the primer and get some undercoat on.

Sunday was a polar opposite with wall to wall sunshine from the start.  By 11am Chris and I had the finish coat on the gunwale and moved AmyJo across the arm to rub down the Port (left) gunwale.

By mid day the gunwale was far to hot to paint so we got the chairs out and just chilled with an ice cream.  At 3pm the cloud had built sufficiently to hide the sun and let the gunwale cool down.  Working as fast as we could we got the finish coat of paint on the gunwale and the bow touch ups.

Today we left at 9:30am after topping up with water and emptying the Portapotti.

We only met one boat on the way out but as the levels were well down we kept running aground.  At one point I had to use the pole to get AmyJo back into deeper water.

The levels were really low so we barely got over tick over most of the way.  At swing bridge 30 as we passed through another boat appeared astern.  It looked like he had been waiting for someone to go through the bridge  "no problem" I said "you can get the next one.  "I'll be mooring up shortly" he grinned back"


We made a pit stop at New Mills Marina for a pump out and to top up with diesel.  At 69p for the diesel and £16 for a pump out it was good value considering there is no competition on this arm.

Just before Swing bridge 25 we passed the boat we let through earlier, moored up.  Chris set the bridge open and I went through just as another boat appeared and followed.  To our surprise the first boat untied his lines and motored through too grinning from ear to ear.


OK I thought perhaps he stopped to look round maybe.  It was not until we found him moored once more at the next swing bridge we realised he was playing us for fools and letting us do his work for him despite having 4 crew to himself.  The other boat let us through first and sure enough he and a further boat pulled out and followed us through.

We tried several times to moor up after this but the low levels meant we could not get in on most of the moorings.  We eventually got in some Armco near Disley but are aground with the stern out 4 feet.

Our shirker went past us not long after and his smile quickly vanished when he saw us moored in a perfect spot and no free Armco left.  I waved and quipped "Hello again" but this time I was ignored!  I wonder why :-) 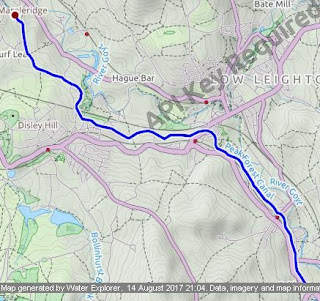