Once more we woke early but did not rush to leave.  We know it was not far into Manchester so we moved AmyJo onto the water point and topped up whilst Chris went to investigate the buildings opposite us.  They had the appearance of being a medieval Tithe barn but research revealed the were originally oil stores built in 1852 for the canal operations.  Converted in 1986 in these lovely apartments.


Just as we were ready to get underway a boat slowly passed us.  We fell in line astern just as a day boat rounded the bend behind us.  The boat in front continued to go slow all the way to Barton Aqueduct before finally deciding to let us pass, all the while the lady on the gunnels polishing the boat.  Good job we were in no hurry but the day boat behind were getting impatient though.   Once passed the slow boat (still on tick over) we let the day boat pass us.


Eventually we reached Waters Meeting and swung left toward Manchester and new waters for AmyJo, again.

We carried on past the container terminal an on past Manchester United's Stadium.


Soon we came to new development and numerous bridges.  At one new shiny office block we could see ourselves and AmyJo reflected in the black glass

We soon noticed that despite the new developments these nestled along side areas of dereliction, presumably waiting their turn to rise again.


After a couple of miles we lost count of the number of bridges we passed under.

One bridge that did stand out is Throstle nest bridge.  There have been two unrelated bridges with this name. The present one is a small footbridge. The other was an iron bowstring road bridge across the River Irwell, connecting Manchester and Salford. 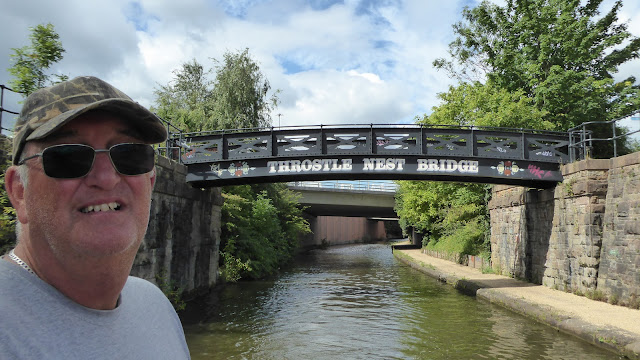 Next we passed Salford Quays.  We could not see much of the quays themselves but we knew they were near by the Satellite dishes on the buildings of Media City.


From here on in the canal plays dodgems with railway, tram and road bridges most elevated above us

Blink and you'll miss it.  As one approaches Castlefields it is easy to miss it in the profusion of side arms and disused basins.  Fortunately the bottom lock of the Rochdale 9 block further passage and Castlefields Quay appears on the right

After settling AmyJo on her mooring we took Smudge for his usual walk after cruising and explored the basin area.  We crossed the white bridge and felt odd as the entire bridge platform bounced as we walked on it.  Smudge was unsure what to do about this but with a little coaxing he manage to cross too.


Much to Smudge's relief we found a good sized patch of grass for him and whilst there two tiny doggies came to play with him.  Smudge was chuffed he was the bigger dog for a change.  We had to restrain him as he wanted to jump all over them.


In the evening we learned that Chris's Neice was in town whom she had not seen in a good while.  Louise joined us and later still Chris's sister Janet and husband Peter, who again not seen for a while, joined us.  We all went out for a bite to eat and found a very good Italian restaurant call Ask Italian, near Piccadilly Gardens. 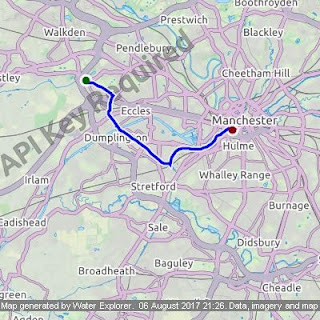