We had a good night sleep though we were a little worried about the obvious drug dealing going on outside our window in the car park, but to be fair we were not disturbed by them so we left them too it.  Should we have called the police maybe?  We still had one more night to stay so I did not want any trouble, better to let sleeping dogs lie as it were.

We hung about the boat all morning after we heard the boat in front had an intruder during the night about 1am whilst they slept.  Turns out it was a drunk and we think he thought the boat was unattended.  We think we were left due to Smudge being seen and barking at a hoody earlier.

In the afternoon we had a look round the museum of Science and Industry.  Sadly half of it including the air and train halls were closed to the public.

We still spent a good time going round the rest of it and its amazing how many everyday items they have in their collections hall.  Everything from a sweet wrapper from 1920 to full bomb disposal kits to trim phones to every desktop computer brand ever made.  Fascinating.

Outside there is a replica railway complete with steam engine and railway station.  Joy rides on the train went ever half hour.  Further along the track are storage units for receiving items to add to the collections.  These grouped 10 units in all.  You could see in them and all sorts of equipment could be seen.  Full TV broadcast mixing desks to printing presses to cranes and lorries.

This morning was time to move on so we rose at 6am.  Whilst I walked Smudge I noticed nb Oakmere was getting ready to leave.  I asked if they were headed up the Rochdale 9 and found they were.  I asked if we could join them and would be ready by time they set the lock.

With gates opening for us we entered the first of the 9 notorious locks with trepidation of what lie ahead.  We have heard so many horror stories about these locks, we were about to find out just how bad they were.

Chris and Dianne from Oakmere worked the locks although at first it seemed only Chris would do them.  After asking for help Dianne eventually came up to help.  It was as well she did as the locks were hard work


One thing of note we found about Manchester are the sheer number of homeless people there are about.  Here we found a camp of tents and a burnt out narrow boat, clearly all shelters for the homeless.  The mess around the site typical of lots of nooks and crannies around about.


In many areas construction work was going on, the noise deafening at times.  Scaffolding at this lock made getting across to the offside impossible without crawling across the slippery lock beams.  Good job Chris had good shoes on!


Nearing the top of the 9 at lock 86 Chris was approached by to young Irish workmen.  They asked her in the thick Irish acsent "how many males dur yur do a day love" to which she replied "Oh it depends on the number of locks I have to do".  When she asked me the lads took off smartly.  Poor Chris thought they had said miles!

Lock 85 in the set is under a large office block.  It is notorious for seedy goings on and we had been warned to be on our guard so kept Smudge on board and was ready to aid Chris and Dianne if need be.  The place smelt awful and was littered with needles and used condoms, however, the only people we saw was a family walking through and a very young Policewoman who cheerily chatted to us whilst we waited for the top lock to be set in our favour.


The top lock was causing us problems as can be seen from the photo.  A torrent of water was cascading over the top gate.  So much in fact that the lock would not fully drain so we could not get the bottom gates open.  We tried cracking open the top paddles for a bit but the flow persisted.  In the end it took Chris and Dianne on one lock beam and the full might of AmyJo's engine to get the gate open.  Now I know this is not a good thing to do as it puts a strain on the lock gate bearings but there was no way we could have got through and by now a queue was forming above.


Finally though the "9" we turned onto the Aston Canal at Piccadilly Basin with much relief.  Seems we had an easy expedition or things are now much improved.  After a short run a sharp left turn was ahead but I was sizing up some mooring pontoons and misjudged the turn.  AmyJo hit the wall bow on with a mighty thud.  Luckily no damage was done bar a few things being knocked over down below and a bit of paintwork on the stem post lost along with my pride. Worse the moorings were not suitable either.


It was now 11:30am and Roger on nb Oakmere wanted to stop for a coffee break and we thought it a good idea too so stopped as well.  We could not find any moorings at first but did find a stop where we could tie up to some lamp posts on the offside.


As it was only 11:30am and rain was forecast for tomorrow we decided to continue on so, refreshed with an early lunch and a cuppa we set off again.  The 18 Ashton locks are all single locks so to give Chris a break I took over lock wheeling.

I did not enjoy Manchester as much as I did Liverpool.  I'm sure its a lovely place but I could not feel at ease the whole time we were there.  What with drug dealers and intruders, the constant wailing of Police sirens and drunks etc it did feel a bit off putting though I'm sure its not really the case all over Manchester.

After creeping under a very low road bridge I unlocked the Cuff locks and we set off up the next set of 18 locks.   Unfortunately all set against us.


We worked our way up the locks one by one.  I unlocked the cuff locks in turn and when Chris motored out of each lock, shut the gates and then opened the bottom paddles to set the lock for nb Oakmere below.

This block of apartments caught my eye.  Anyone who has watched  StarTrek may think as I did that it looks a bit like a Borg cube.  Certainly very prison like in the least


About lock 8 a lady appeared and looked at what we were doing then stomped off back down to where nb Oakmere was.  She could be seen helping Dianne with the lock.  We were to learn she was from a hire boat behind nb Oakmere and was clearly trying to move things along a bit faster.

She then ran past us and proceeded to try and set the next lock above us unsuccessfully, she did not have her cuff key.  On her return I explained that I was unlocking the paddles for Dianne as I went and she seemed surprised.  It was clear to her things would not go any faster so she went back down to her boat.   She would re appear later armed with her key only to find a boat had since come down and from now on all the locks would be in our favour.  With that she then proceeded to help Dianne from then on.  I in return left the cuff locks in place on the bottom paddles safe in the Knowledge Dianne had help.

At lock 13 the area looked decidedly run down.  All the buildings looked derelict and shabby.  Two men nearby watched Chris deftly drive AmyJo into the lock pronouncing "Who said women can't drive, you did that like a boss."  Chris beamed for ear to ear this time.

From nowhere a lad on a Quad bike appeared and three others soon after making their way to the next lock.  Expecting trouble we prepared ourselves for what would come but it seemed all they wanted to do was open the gates for us and then disappeared before we got chance the thank them.  A far cry from what we were told to expect from the kids round here.

At the last few of the locks a gentleman appeared on a push bike and proceeded to help me work the locks.  To our sailing club members I think he looked a bit like Bill don't you think?  Who he was or why he helped we had no idea but were grateful for his help none the less


Once out of the top lock we pulled over to top up with water.  The water point is easily missed being in a small black cabinet by the top gate of the adjacent derelict lock.  We would have past it by if it was not for lookalike Bill informing me it was there.

Whilst filling I took my now usual jaunt down the weed hatch to find a bumper catch consisting of a complete yellow cycling t-shirt, 15 plastic bags in various states, a thong (or at least thats what it looked like, yuck) and more rope.

Lookalike Bill had told me not to stop anywhere except Portland basin and we could see why.  He informed me the basin was about an hour away and sure enough he was right.  Tired and having worked 27 locks we finally moored at 6:30pm, 11 hours after setting of.  After dinner we took ourselves off to bed early and slept a short course of death safe in the knowledge we had got through Bandit country, phew! 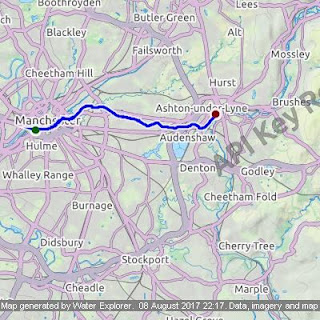 You have moored AmyJo exactly where we moored Waiouru at Portland Basin.

Hi Steve and Chris, I went to the Test match by train on Monday and recognised some of your photos from the train above. It looks in an appalling state. I saw tent city under an arch and the burnt out boat. It looked far worse than I had been led to imagine. Such a shame as it could be made into a pleasant experience if it had been included in the regeneration process instead of being buried beneath it. Safe to say we won't be going there anytime soon.

Hi Tom how is life for you ashore? We still read your blog

Dave, neither will we thats for sure!