We eventually stayed a week and a half in and around Chester then returned to Tattenhall for a few days to equalize the batteries and prepare for our summer cruise.  It also gave Chris chance to get all the washing and ironing done whilst AmyJo was hooked up to the mains.  I spent the time cleaning and generally pottering about doing a few jobs and we also took the opportunity to catch up with our mooring nieghbours.

Today we had a bit of a lay in thanks to Smudge sleeping in which is unusual for him, so did not actually get underway until 11:15am.  This was partly due to the dismal weather, such a change from the previous few days.  A heavy drizzle was falling and we nearly decided to stay put but we really wanted to get a start so togged up in our wet gear we first fueled up and pumped out then got under way.

Chris and Smudge stayed down below whilst I took AmyJo out of the marina and headed for Barbridge our destination for today.  Naturally with the rain we could not take many photos but we've blogged about this stretch before.

We found Wharton lock in our favour and as AmyJo entered the lock a boat turned up to come down so Chris had some welcome help.

At Iron  lock there was a bit of a wait as a boat in front of us was going in and boats above waiting to come down but the wait was not too long and we're in no hurry.  The crew of nb King David, in front of us, told Chris they would wait for us at Beeston lock and so we had pleasant company for the next two locks. In fact we soon realised that we had done the same thing with them last year.

It seems a lot of boats were heading to Chester so Beeston and Tilstone locks were in our favour too with boats waiting to come down.  Working together with the other crews we got through them quite quickly then said our farewells to the nb King David crew as they stopped above Tilstone.

At Bunbury staircase locks the usual hustle and bustle of the Anglo Welsh hire boat yard was going on.  We said hi to our friend Steve who runs the yard and accompanied a hire crew in the staircase.  It was their every first ever narrow boat cruise and lock, talk about baptism of fire.  First ever lock at its a staircase!  We helped them perform the famous Bunbury shuffle for which they were grateful, and then let them take the lead.  They have a deadline to be back by Friday and we have plenty of time.

By now Chris and Smudge were drenched as the rain returned so I sent them below to dry and warm up as we were lock free from now on today.

We passed through Calverley services and eventually called it a day Chester side of Barbridge Junction.  As is always the case now we're moored up the sun has started to make an appearance!  Oh and a bit of a landmark, this is our 400th post! 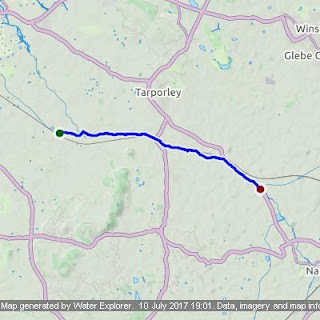