Well I never, what IS happening to our weather?  After yesterday's rain we woke this morning to sunshine streaming into the boat, what the....  A far cry from yesterday's awful rain, not that I'm complaining mind.

We set off aiming to stop at Middlewich, little did we know we would stop but not for the right reasons.  All will be revealed later.

The morning's sun was glorious and felt good as we cruised along.  We passed my favourite building on the branch, this beautifully converted stable block.  I could quite happily see my days out living there.

A little further on is another house lovingly restored.   The last time we came by it was derelict but now someone has put a lot of care and attention into it.  What a delightful place they now have. 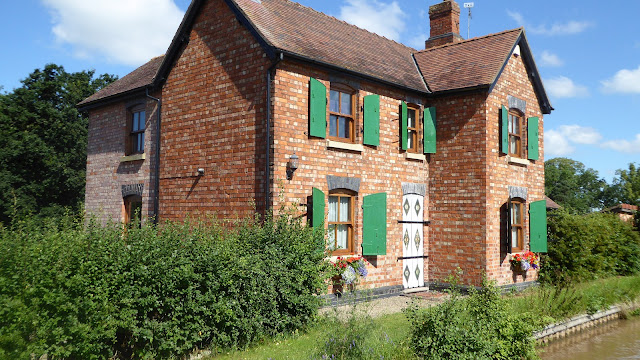 Smudge has now taken to laying on his bed on the hatch when we cruise and with it being so nice Chris decided to join him. We have found sitting on the roof gives so much better views over the hedges and is now my favourite spot to helm as we go along.

As I mentioned yesterday it was quite busy with boats coming the other way.  Sods law we met everyone at or near bridge holes.  We let this chap through and started our way through.  The boat in the distance was not happy we had stolen his bridge hole.  As you can see I'd hardly call stealing would you?


On approach to Wardle lock we were surprise to find only one boat was descending ahead of us and none below.  Most unusual we thought but the reason was soon to become clear.  We passed nb Elizabeth on the way.  We do so like this boat, she looks so pretty to me.

The new owners of Wardle cottage have clearly been busy as signs its is now being lived in are evident.  We have been following their posts on FB and it looks like major interior works have taken place.  Its good to know the cottage will still have a bright future.

After descending the lock I crept out under the bridge into the junction expecting to meet boats coming in either direction but, not one.  None coming from Middlewich and nothing coming down Kings lock.  Compared to the usual bustle of the junction all was eerily quiet.
On arriving at Middlewich top lock we joined a queue of four boats and all became clear.  C&RT had drained the bottom pound to survey a culvert but had had to drain the pound almost empty.  An unlicensed and what looked abandoned boat had to be pushed into the middle of the pound to keep pit upright and thus was now blocking passage as they tried to refill the pound by lock boats down, which clearly was not enough as can be seen by this photo
.
After 2 hours of sitting in the middle lock we manage to descend into the middle pound.  With no rings to tie up to a nearby tree had to suffice.  Good job this was on the offside!

By now the queue of boats was building but with several C&RT chaps helping we eventually got on the move again.  Sadly scenes like this are becoming all to frequent across the network as the aged system creaks under the burden of hoards of boats and inexperienced crews leaving paddles open these days, though admittedly not in this case.

After a brief stop to water below big lock we carried on our way past 9 or 10 boats lined up to go up the locks.  Some reporting they had been waiting for 5 hours!   We passed through Croxton Flash and eventually found a lovely spot to moor called Bramble cuttings

This idealic mooring is punctuated by the remains of a narrow gauge railway.  I've tried to research what could have been worked here on the internet to no avail and only the Pearsons guide eludes to the fact it was a site of puddling clay works.  For those who don't know puddling clay used to line the canals as it is quite thick and forms a waterproof seal for the canal bed and walls.   One can only assume the curled up rails at the bank were to allow the wagons to be tipped to empty the clay into waiting barges

Oddly these moorings are located on the offside of the cut and there seems no access for walkers.   After tea we took Smudge for a walk to explore but only found fields behind and the area fenced of by a wire fence buried in the brambles.

On our walk around we came across this sign pinned to a tree.


I jokingly remarked it could not be a sandy beach and must therefore refer to a tree (Beech tree?) but the spelling would seem to indicate not.  A few yards on and sure enough there was actually a beach.  Alright it was tiny but a beach of sorts none the less.  Smudge was delighted and proceeded to happily splash around in it. 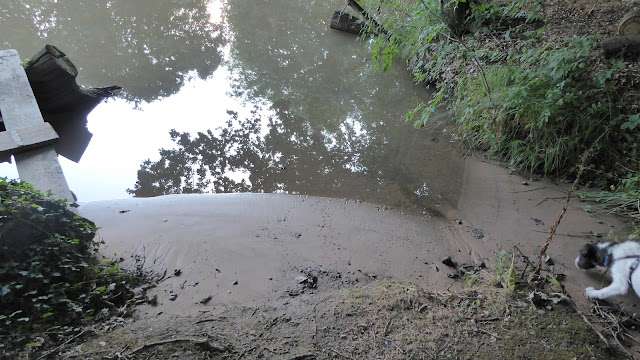 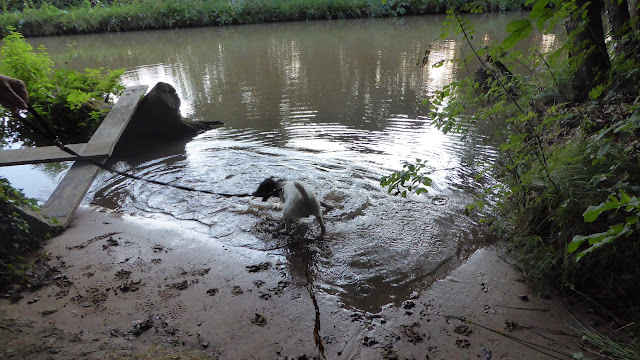 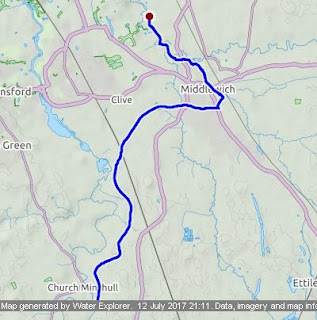