My how this week has gone by so fast!

On Saturday we had a nice lay in and then went to have a look at the Beatles story.  With audio unit and headphones one follows the group's time line from the very early school boy days right up to the band splitting and beyond.  It was a fascinating story but a bit lengthy at times.


In the evening we were joined by our friends, Jo, Dave, Brian, Paul and Sheila who we met in Tattenhall Marina and have become our closest friends.

We started off with a slap up banquet in the Mayflower Chinese restaurant and then hit the town.  Down one of roads these umbrellas are celebrating the Liverpool Pride that was currently under way. 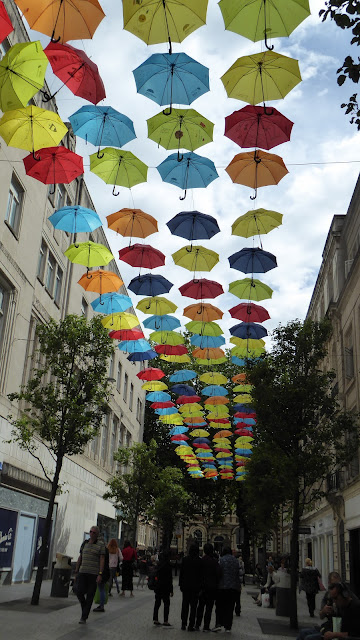 First stop was the Bee Hive pub.  We've been here before and so decided we'd pop in for one or three. 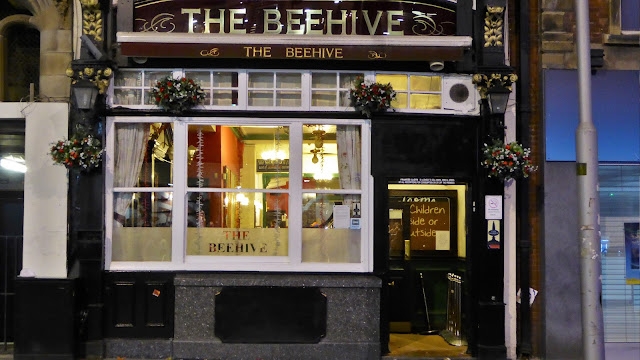 Sadly the great atmosphere was rather marred by a very large Hen party.  The girls clearly well into their party were VERY loud and could barely stand.  We decided we would move on after the girls started to drop drinks and fall into people.  There was going to be some serious hang overs in the morning for sure

A short walk and we found a little gem called the Canarvon Castle.  Its a small pub but inside it was a world away from the busy city noise.  Inside was calm and quiet so we finished off staying there until the others had to catch the last train home.


Yesterday, Sunday was to be our last day in Liverpool.  We decided we would stay aboard.  I needed to ready AmyJo for the coming cruise and buried myself in the engine room.  First to tighten the stern glands and second to replenish the greaser.

We then moved AmyJo onto another mooring so we could top up with water as the nearest tap was too far for our hoses.  Knowing boats would not arrive until at least 1pm we stayed on the mooring while Chris made good use of the electric and water point, doing 4 wash loads and using the tumble dryer.

Once Chris had finished with the washing we decided we'd take a look further along the docks towards the Marina 4 docks away before returning to our allotted mooring.


This morning we were up at 6am so we could give Smudge a good walk.  He would be on the boat for a good while.  On our return we readied AmyJo and with a touch of sadness slipped the mooring at 7:40am  and followed the lead boat out into Albert dock and the start of our exit from Liverpool.  There was to be 6 boats leaving with us.


At Man Island Lock Nigel on nb Tam Chas waited for us. Sid greeted us with a cheery smile and that set the tone for the rest of the journey.  Turns out he and Nigel had known each other since they were 10 so the banter was as good as it gets.

In Prince's Lock we found a couple of floating balls.  Nigel grabbed one on the way in but another got wedged between the boats.  I worked it back to the stern and Nigel retrieved it.  The ball looked new and still had the £12 price tag on it.  His grand kids will love it when they are given it.

In this direction one gets a better view of Sid's ditch and the Wind turbines behind.


As we approached Stanley lock Chris spotted this mural on a building beside the lock.  We had not noticed this on our way in.  Its one last tribute to the Beatles so loved by Liverpool. 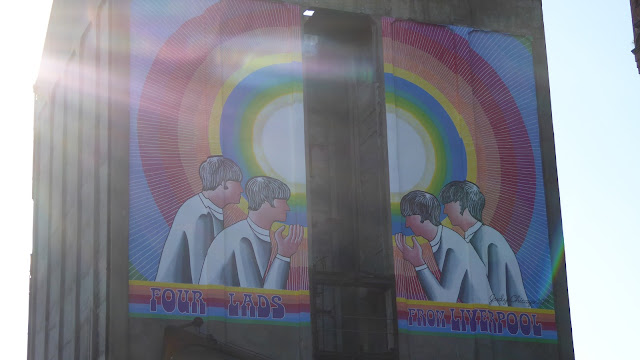 In the third lock there was a little worry, as when we entered we found a clutch of ducklings in the lock.  We motored in slowly and Tam Chas being the smaller boat held back to the bottom gate to give them room.  Sid and the boys filled the lock slowly so the ducklings would not be harmed and when the gates opened mummy duck lead them out and off into the reeds.


We had a good run down to Bridge 6 stopping briefly on the way at the services to top up with water then we moored up for lunch.  The C&RT boys were a while getting there as they were dealing with a boat that was adrift somewhere.

All went well until Bridge 9.  As the C&RT lads opened the bridge I moved off and collected a large heavy duty plastic bag round the prop.  Down the weed hatch and thankfully it came off easily.

After a brief run to Bridge 10 we called it a day and moored up after the bridge for the night.

We both fell in love with Liverpool while we were there.  The longer one stays there the more it grows on you.  Its a fantastic city with so much to see and do, well worth visiting.  We were made more than welcome and the locals so are friendly.  We will definitely be doing it again!

I must add though Sid and the C&RT crew as some of the best C&RT staff we have dealt with yet.  They are all so helpful and always greet you with a smile.  We cannot thank them enough for their help and guidance which made the journey to and from the dock so easy.  Thanks lads. 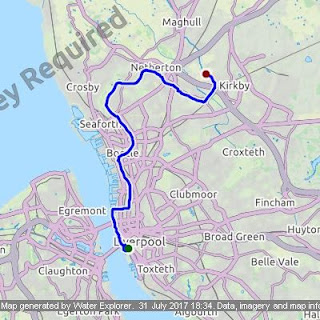 Hi both, what a great time you've had! Where did you take Smudge for his walks? It's the first thing we think of when staying in a city. We haven't been to Liverpool yet - maybe next year ....
best wishes Debby

Hi Debby,
Cities are a problem for doggies but fortunately there are some grassed areas near the docks. It just meant that Smudge got a lot of shorter walks instead of a longer one.