With so much to see in Liverpool I've not had much time to blog for which I apologise, so here is our trip update into the city.

We were up and underway by 8:30am in order to be by swing bridge 9 for 9:30am.  This bridge can only be operated by C&RT staff so we would have to wait for them to arrive. We got there with 30 minutes to spare and joined 3 other boats heading into the city with us.

Bang on 9:30 the C&RT chaps arrived and gave us a briefing of what to expect and where we needed to be.  With that the bridge was swung open and we got underway.  We needed to be at Litherland services by 11:30 if we wanted to shop or pump out and fill with water.

The lead boat, a plastic cruiser, shot on ahead of the three of us getting through the manual swing bridges long before we got to them, however, it did him no favours as we found him waiting at bridge 6, the next bridge to be operated by C&RT.  They had refused to open the bridge until the rest of the fleet caught up.

Just before Litherland services we were passed by two dragon boats.  I was amazed to see none of those aboard were wearing buoyancy aids.  The RYA instructor in me wanted to tell the organisers they were negligent but they passed before I got chance as I was too busy avoiding them and staying out of the Lilly beds.

We arrived at Litherland services at 11:30 and managed to get alongside them.  The boat in front wanted to fill with water despite there being water points in Salterhouse moorings.  This delayed us getting a pump out but did mean Chris could nip into the nearby Tescos.  She was not quick enough for Sid who pointed at his watch and said, "You just wasted 2 minutes so now you only have 18 left, of you pop".

After 20 minutes I got the skipper of the boat in front to swap places and just had time for a quick pump out before our leaving deadline of mid-day.  Chris got back with five minutes to spare before time was up to a cheer from Sid.

Sid informed everyone we had to be at Stanley locks at 1pm otherwise we would have to wait until tomorrow.  Looking at the map this meant we would need to be doing 4mph to meet the deadline.  This is much faster than we would have liked but it would seems its quite OK to do so here.

With throttle well open AmyJo surged along at 4.1mph according to the GPS.  She took it in her stride but every now and again I had to shake off the urban Jellyfish (plastic bags) by going into neutral and then a burst of reverse thrust.  Thankfully this seemed to work just fine but had to be repeated more and more as we progressed.  Looking behind we could see plenty of detritus being thrown up in our wake.  I was amazed to find the prop completely free of rubbish when I went down the weed hatch next morning!

Sid had told us to look for a pillar of concrete in the middle of the junction as this would alert us to the turn.  Eventually with just 5 minutes to spare at 12:55 it came into view and we rounded the junction arriving at Stanley Top lock dead on 1pm as required.

Being double locks the first two boats were already on their way down.  We had a short wait and then together with nb Katherine- Louise we entered the locks.  There are 4 locks here and we kept the boats together as we crossed the pounds to the next.

With further instructions from Sid we proceeded into the docks proper via a low bridge 3.  The view as you enter the docks is impressive and the scale soon becomes apparent


Our orders were to proceed to the Victoria clock tower and then turn Left.  This meant transiting two large docks, Stanley Dock and Salisbury Dock before reaching the tower.

Victoria Tower is a Grade II listed Gothic Revival clock tower located alongside Salisbury Dock. Positioned among the two river entrance gates to the Salisbury Dock itself, the tower acted as an aid to ships by providing both an accurate time and also warning of impending meteorological changes.

Victoria Tower was designed by Jesse Hartley and was constructed between 1847 and 1848, to commemorate the opening of Salisbury Dock. Its design was based upon an earlier drawing by Philip Hardwick in 1846.

Victoria Tower, which was often referred to as the 'docker's clock', was built as an aid to ships in the port, as it allowed them to set the correct time as they sailed out into the Irish Sea, while its bell warned of impending meteorological changes such as high tide and fog. Upon its completion it also served as a flat for the Pier Master.

Due to the decline in docking within Liverpool, the tower has fallen into a state of disrepair suffering significant decay due to both water and wind damage. The tower is also overgrown with vegetation and has a leaking roof. Nonetheless, despite being in a state of dereliction, Victoria Tower is part of the Stanley Dock Conservation Area and also Liverpool's World Heritage Maritime Mercantile City.

In April 2010, it was announced that Victoria Tower, along with several other buildings around Clarence and Salisbury docks, would be repaired by owners, Peel Holdings. The tower and the areas around it are also included in the proposed £5.5bn regeneration programme, Liverpool Waters.


On turning right our next leg was Sid's Ditch. When the next dock, Clarence Dock, was in-filled a five foot wide feeder culvert was retained and this feeder has been increased in width to thirty three feet to allow for navigation and renamed the Central Docks Channel. This channel runs beneath Bridge AA and into West Waterloo Dock with South Waterloo Dock running parallel to it. 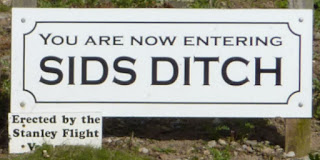 The above sign was erected at the entrance by C&RT staff to commemorate the opening of Sid's ditch.  It turns out its actually named after our C&RT guide, Sid, as he was the first person to take a boat along the passage when it opened!


Next is Waterloo Dock and buoys mark the passage for us keeping them on our right.  Here are signs of new development alongside the docks and our first proper sighting of the famous liver building.

In the next dock, Prince's Dock, we had to keep the buoys on our left.  Sid had told us when we reached the lock at the far end not to proceed until he got there.  As it happens he was already there and we entered the lock straight away.

Sid being the cheeky chap he is added a bit of humour to his next instructions this time, telling Chris to keep a firm hold of Smudge as the Liverpool Nessie would get him.  He added if Scotland has a Nessie then Liverpool must have one too!  We were to proceed to Man island Lock via the new St Nicholas place tunnel and wait at the lock.


This tunnel exits after 200m into the Liver basin alongside the building itself.  Here a summer fair was well underway and hundreds of gongoozlers watched as we passed through into the shorter Cunard tunnel.  A real goldfish bowl moment.

Leaving this tunnel and out into the Pier head Channel.  My glasses were giving me problems by now as the transition coating was not changing quick enough so on entering each tunnel I had to remove them to see where we were going!

The final tunnel in the link is imaginatively named the Museum tunnel as it passes right under the museum.  On exiting this one we finally came to Man Island lock on the left.  Sid was there to greet us with his next set of instructions.  First he gave the ladies a demonstration of which left was the real left then told us make two right turns then two left turns, demonstrating what that looked like for everyone's benefit  (Amy, thats just like your course dance you do before a race!)

Leaving Man Island lock we entered Canning basin and turned right past the two Graving dry docks.  We looked for the next turn but its not until we were almost on it before we could see it.

At the far end of the half tide dock is another lock out onto the Mersey river.  We swung left just before it and entered Albert Dock.  An impressive dock where all the warehouses have been re-developed and now house trendy coffee bars, restaurants and gift shops along the dock sides.

Those of us old enough to remember, Albert dock was the location where Fred Talbot, the weather man jumped around the floating map of the British Isles.   Sadly it is no longer there and Fred now has a less salubrious claim to fame, no longer admired by his fans.

As we turned left into Salterhouse dock our passage was blocked by two large swan peddle boats.  A quick toot on the horn to get them moving again and we finally reached our destination after 13 days of cruising.  We had arrived in Liverpool!

There to greet us were our good friends Del and Al on Derwent6 (click)  We were booked on another berth for tonight as we were a day early but the one next to Derwent6 was empty so we reversed onto that one right alongside the one we would be booked on for the rest of the week. 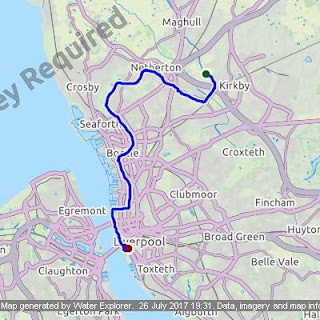