Are you sitting comfortably and do you have a drink handy as this post is a bit of  blogathon?

We knew we needed to cover some ground today to get through Sale and Stretford so up at 7am and underway by 8am.  All was quiet on the cut and so with no locks to hinder us today we soon made good time  At OIdfield Brow just before Sale is the site of the old Linotype works.  Hardly anything is left now as a new housing estate is emerging from the dereliction.

From here on the canal is as almost as straight as an arrow with only gentle sweeping curves barely noticeable as the canal is open and wide.  here are signs of new apartment blocks everywhere.  These ones built to minic a ship, the bows of which can be seen in this photo


Despite the shiny apartments nestled in between are still signs of the old industrial age left derelict like this warehouse.  The archway clearly shows it was serviced from the canal.  Would make for an interesting house conversion complete with boat house.


Did I say the canal was straight?  Sale was not at all what I expected.  We had been warned not to stop here.  But as you can see it looks quite pleasant but then what would it be like at night.


After what seemed hours of dead straight cruising, waving back at those who waved to us, we were nearly out of Sale.   At least the folks here seemed pleasant enough.  Dog walkers, runners cyclist galore making good use of the near perfect, wide and tarmacked tow path. Several waved and said hello to us.  I actually quite like Sale, at least the bit along the canal that we saw.

Finally at Stretford the canal turns left and we pass under the two large road bridges and back out into the countryside.  Phew.

Next we passed Stretford Marina.  Looks quite good and secure here and the chandlers looked well stocked too.  We even got a wave from the proprietor too.  They like to wave at passing boats round here.

From here on the canal follows large industrial sites one after the other that went on for what seemed miles.  Many are new units and houses all sorts of businesses.  There were on occasions some wonderful smells inseminating from some.  A bakery and a sweet storage unit gave the best smells of all.

The Pearsons showed us that we would need to turn left at Waters Meeting junction.  I was really looking forward to this as I imagined it would be something to see.   In reality we nearly missed it as it looked like a side cutting dead end as we approached.  I gingerly swung AmyJo round into the turn wondering if this really was Waters Meeting junction.  Pearson's showed no other junction around here so it must be the junction we wanted but we still were not sure.  No signs heralded the junction by name and not even arrow signs pointing to Liverpool were to be seen.
It wasn't a dead end and so we kept going.  In fact it was not until we passed the Kellogg factory were we really sure we were on the right route.  We both breathed again and settled down to continue our journey.


Again the canal is fairly straight and we just caught a glimpse of the Trafford Center before it vanished behind the trees again.  Not long after we came to a blind corner.  Edging round we found ourselves at the Barton Aqueduct that crosses the Shipping canal.


Even though we are 30 miles from the coast, at Monton there is a lighthouse.  Built by Phil Austin it took him 3.5 years to build at a cost of £20,000.  His 36-foot tall weekend retreat, overlooking the moorings at Monton, has been worth it. Phil, 64, sold his canal boat to pay for his folly which will soon be fitted with a light to cast a beam on Monton Green. The lighthouse has three floors, the top of which has a 360 degree view. It also has a small office which Phil, of Half Edge Lane, Eccles, plans to use as a refuge from the bustle of everyday life.


By now we were noticing the canal was taking on a distinct orange colour a bit like the Trent and Mersey at Harecastle tunnel.  At Worsley all became clear.


Worsley looked really pretty so we have resolved to stop there on our return Worsley is know as the home of the Bridgewater canal.

The Bridgewater Canal was built because of the Duke of Bridgewater's coal mines at Worsley. The coal seams ran under the higher ground to the north. The Duke's land agent, John Gilbert, saw that it was possible to connect the canal directly to the mines by way of an underground canal. This in turn could be used to help with draining the mines, providing a source of water for the canal.
The underground canal was constructed from Worsley Delph, an old sandstone quarry near Worsley Brook. At one time a million tons of coal a year passed through this tunnel. To relieve congestion a second tunnel was constructed which met with the original about 500 yards in.

Around 47 miles of underground canals were constructed, on four different levels, connected by a water powered inclined plane and lifts. The main tunnels stretch as far north as Farnsworth, with side tunnels running at right angles along the coal seams.

Specially designed boats were used in the tunnels. These were only four and a half feet wide with protruding ribbed sides and so were given the nickname of "starvationers". These were loaded with coal at the coal face, were hauled from level to level on the inclined plane and brought the coal out onto the canal. The remains of one of these boats is seen near the entrance to the tunnels at Worsley Delph.

From Worsley on there is not much to write about.  It runs through countryside and is very nondescript for several miles.  Its wide, weedless and has concrete banks with well maintained towpath and again in many placed dead straight, punctuated by the occassional bridge.

One noteworthy item are these lock looking structures along the way, only 10 feet long.  In fact they are not locks per say but actually stop locks.  The canal is too wide to use the traditional stop planks and so these locks were constructed to dam the canal if needed.

Bidgewater Marina is a welcome respite from the sameness of the canal and a nearby pub tempts the boater to a well earned pint and food.

A little further and the cause of the canal closure at the beginning of the season one passes under the new bridge across the canal.  Still being worked on even now. 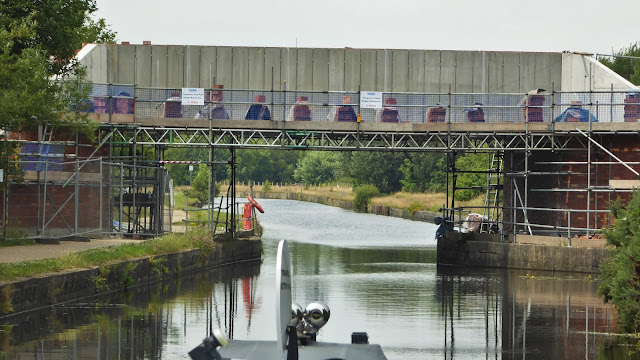 Another mile and a second bridge carrying the A580 is nearing completion of its strengthening work.  Clearly much done whilst the canal was closed by the looks of it.

By late lunch time we were closing in on Bedford and Leigh.  Here the towns past cotton mill history still stands, all be it derelict, for the boater as they approach.  Even now they still dominate the skyline and must have employed thousands in their day. 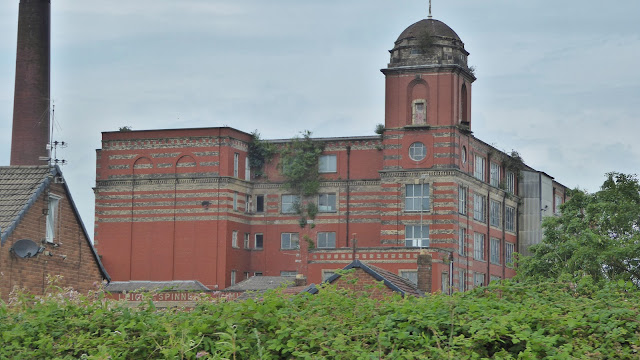 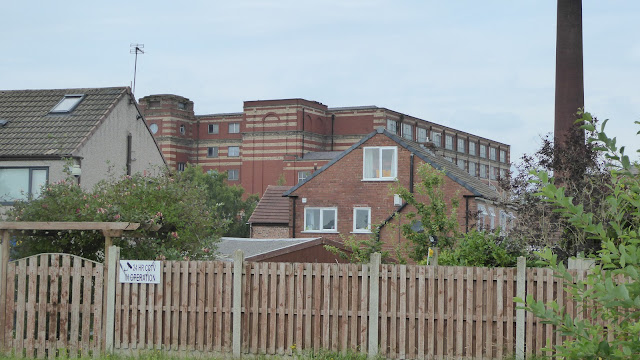 We had been told that the canal is regularly dredged and that is evident as we cruised with no silt being stirred up.  At Leigh this dredger was underway presumably to its next job.  The guy on the front relaying course corrections to the helmsman who could barely see where he was headed because of the crane. 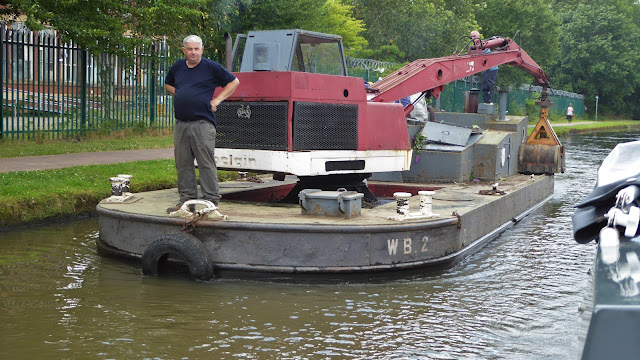 At Leigh Bridge in the middle of town the Bridgewater canal ends and we join the Leeds Liverpool canal.  Only the sign on the bridge alerts the boater to this fact.  No lock just one sign.


At this bridge is located an Aldi Supermarket a stones throw away.  We stopped here and Chris nipped in to get some bread and other bits and pieces then we continued our journey.


We were now nearing our goal on this marathon of a cruise today.  Pennington Flash is a huge country park and we stopped here just before Plank Lane lift Bridge and a smart new marina.


We settled down for the evening and when we looked at our GPS logs were surprised to find we had cruised just short of 20 miles in 7 hours today!  That is a record for us but its not surprising.  The Bridgewater is very wide and deep.  Over the whole trip we rarely had to slow down and of course there have been no locks to slow us down.  It also means we can now make our target of Liverpool for Sunday too. 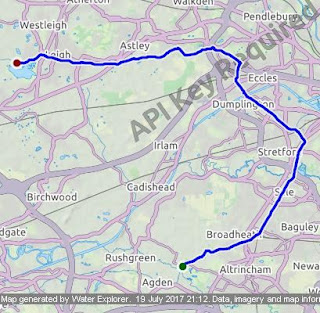