We have had an easy two days so far and not moved very far.  We are still way ahead of schedule so decided to not move today.

Yesterday started grey and damp with AmyJo dripping wet from the night's rain.  I took the opportunity to give her a wipe over to clean then finished with the chamois leather.  All the time somewhere through the trees the sounds of music wafted through the air as it seemed a village fate was getting under way nearby.

We got underway and the sun made an appearance.  In fact the day got better and warmer as we went.  Passing through Stockton Heath we were surprised to find the canal well maintained with lovely houses and gardens to look at.  The owners obviously very proud of their stretch of canal as its the cleanest stretch of canal and towpath we've seen yet. 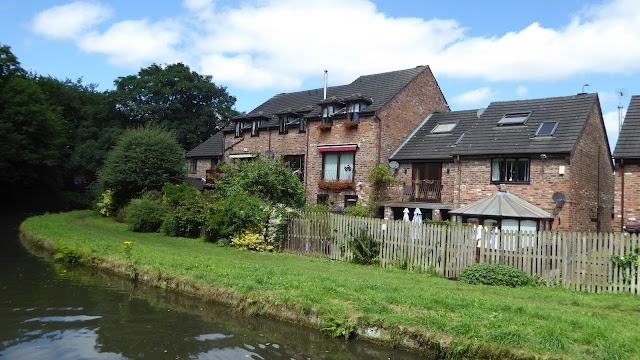 By mid morning the sun was making things really pleasant, even young Smudge was enjoying the warmth.  He lay stretched out on the hatch sound asleep only moving to make sure we were still there.

On the approach to Lymm there are some really superb properties and gardens too.  As we approached the moorings we did not hold much hope of getting in.  Our luck was in but it took a bit of shuffling.  A small day boat had moored with a good 20 feet behind it and 50 feet in front.  No one was aboard and the ropes were badly tied, one almost undone.  We reckoned it would only be there for a few hours so I backed AmyJo's stern in to the bank as best I could and hopped off with the centre line.  Chris held AmyJo whilst I moved the day boat back and AmyJo slotted in the now larger gap nicely.  The owners of the boat in front were worried we would be bumping into their boat we were that close, I was well aware of that and had already started to put a spring on the bow just in case.  I also added one on the stern for good measure.  With boats speeding past I didn't not want to take chances and it proved a good decision. 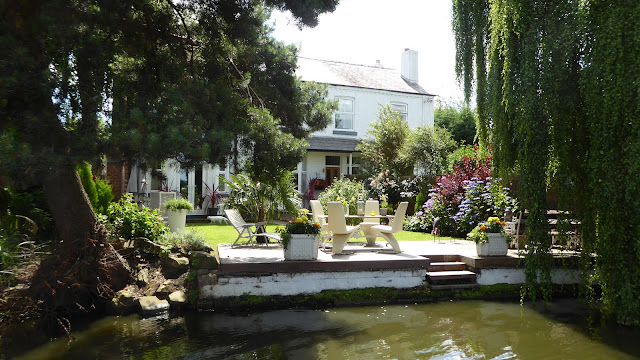 With time on our hands in  the afternoon we explored the village a little before dark.  Lymm is actually quite lovely and its little streets and alleys a delight.


Chris had found that the village has a dam.  Being inquisitive she wanted to investigate so we ended our walk at the Lymm dam.  Its actually quite large and not at all what I expected.

Lymm Dam was built in 1824 – when a turnpike road was created from Warrington to Stockport. In the early 19th century, the Warrington and Stockport Turnpike Trust constructed the road which became the present day A56. There was concern over traffic congestion as local opposition prevented the road from coming through the centre of the village. The Trust then had to find a substitute and they chose to cross what was then 'a pool and stream' in the valley below St Mary's Church. In order to do this, an earth dam was constructed across the valley in 1824.


After its completion, the pool and stream below the church became the lake, which we now call Lymm Dam. A toll bar was situated on the church slope and for some locals this section of the road is still sometimes referred to as 'Penny Hill'. At the time of Lymm Dam's creation, the area was part of Lymm Hall Estate, which owned much of the village at that time.

Today we called in to Sainsburys for a shop to top up supplies.  By now we had passed this lovely looking cottage two or three times and commented how well it was being kept.


This afternoon whilst walking Smudge he befriended a lovely small Spaniel called Molly.  Whilst they played her owner, in a large Fedora hat, stopped his gardening and asked about Smudges breed.  He seem quite taken by Smudge and made a big fuss of him.  His voice was strangely familiar but I could not put my finger on a name.  It was when he stood up I then realised I was talking to none other than Mathew Corbet of Sooty and Sweep fame!  We are in fact moored a few yards away and did not know it was his house.  He asked how Smudge got on living on the boat and had he been for a swim.  We chatted for a while then I bade him goodbye and we returned to AmyJo.


Tomorrow we will be back on target time wise so will continue our cruise toward Liverpool, however, for now we're drinking wine in the cratch enjoying the lovely warm evening with a view to die for.  This is when boating is at its best. 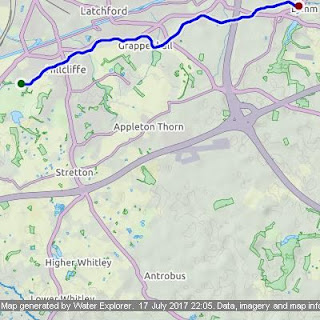 What a lovely little village to explore, plus a handsome dam. Looks like you had a great day - plus meeting a "famous person" too.

Hi Jenny,
Lymm is absolutely delightful. Well worth a visit and we could have just stayed here a lot longer had there been no restrictions on mooring