Two days blogs in one tonight as we had a visit from daughter Amy last night so no time to sit and do the blog.

We pulled pins at 9.30am yesterday in a warm overcast sky.  Our first task was to fill with water by Plank Lane Bridge then go through.

The bridge is electrified and easy to operate.  A local advised Chris not to open the bridge fully but if she removed her finger from the button the bridge would stop at that point.  With enough headroom AmyJo passed quickly through and the bridge lowered, all in less than 10 minutes.

After a few hours cruising through lovely countryside we approached the outskirts of Wigan.  This lake or flash being the last remnants of the country before reaching the city proper.


The locks as we approached Wigan looked old and the paddles locked with cuff keys to stop vandals draining the pounds.   After a bit of a struggle Chris got the lock set and we began our descent into Wigan.

The two double locks before we turned onto the Leigh branch were hard going and I had to help Chris close the gateseach time.  Water levels in the lower pounds were low too and every time I tried to bring AmyJo in to wait for Chris set the lock we stirred lots of rubbish up to the surface.  Luckily nothing found the propeller.


After the second lock we turned left at the junction and continued our descent but now heading away from Wigan and its flight of 21 Locks.  AmyJo is too long for some of them anyway.  All the time there was the feel of rain in the air adding a gloomy feel to the place as we passed through.

After making the turn the lock at Henhurst bridge was better and the bottom gates had a geared arm and winding handle to open and close them.  This made things much easier for Chris.

The next thing we passed was the turn at Wigan Pier.  The approach to this is straight forward enough and the Wigan Pier Pub faces the turn.  Here we, or rather I, made a fau par and misread the Pearsons guide.  As we entered the turn I swung AmyJo to the right by mistake.   I should have turned Left!


On doing so we came face to face with a dead end.  No choice for it but to wind AmyJo and get going the correct way.  All was going to plan until on reversing, we picked up a prop jockey that stalled the engine.     A little bit of wind was making the turn harder and was not helping.  Started up the engine, forward gear,  bit of a rumble and whatever we picked up thankfully came free.  The wind was really making things difficult but I was glad of AmyJo's 50hp engine and with a lot of extra power she swung round at last.


Leaving Wigan behind we cruised past the DW stadium which is home ground for Wigan Athletic F.C. and Wigan Warriors Rugby Club.  At this point we could see right inside and the seat in the far stand.  No match on today and the car parks were empty.

At Lock 89 before Crooke we think the lock gates are out of balance as a simple rod on a pivot and swivel is used to hold them in place when open or closed.  For some reason Smudge took a dislike to the rod and barked profusely at it, not stopping when told to.  His barking went on for several minutes until Chris pulled him away.  Even after that he stood legs spread glaring at it.


Crooke came and went in a blink as the canal skirted its flanks.  There looked a nice pub which we would have stopped at for lunch but there was nowhere to moor so we carried on.

Just after Gathurst lock 90 is situated almost under the M6 that towers high above.  The massive structure domineers the surroundings in what otherwise would have been quite pretty countryside.


We followed a gent single handing from the lock to the first of two swing bridges.  He kindly opened the first bridge for us and then waited for us and a boat coming the other way to pass before he closed the bridge.


At Appley bridge lock we met the same gent again with his Parsons Russel dog that looked like Smudge but brown in colour.  The dogs played together as we set the lock for a while then the other dog suddenly for no reason we could tell turned on Smudge snapping, snarling and pinning Smudge to the ground biting him on the neck.  Only quick reactions got Smudge out of harms way and the other dog calmed down.  Again we nor the owner could not fathom why the dog reacted as it did.  Fortunately no harm was done and Smudge was not injured at all.

We continued on our way and finally calling it a day at Parbold a couple of mile further on.. 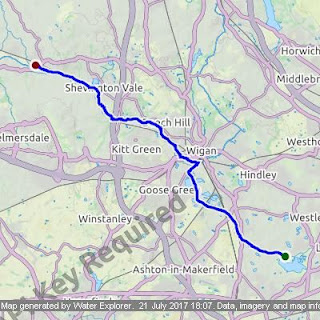 Today we woke to a rain leaden sky and the wind becoming quite gusty.  We decided to have a look round the village before continuing.  Parbold is a delightful place and judging from the number of executive cars, 4x4s and people carriers, quite opulent too.  This is re-enforced by the quite stylish shops, boutiques and accountancy offices that are around the village

This old windmill has now been converted into picture galleries.  Its situated alongside the bridge over the canal.  The 18th century windmill, the Mill House Gallery is James Bartholomew’s own gallery and home to his studio since 1997. James’ current paintings and the whole range of signed, limited edition prints can be viewed over three floors and in the adjoining mill building. All work is for sale.

After picking ups some lovely looking Beef and Ale pies from the local butchers we headed back to AmyJo and got under way.

By now the wind was becoming quite strong but luckily the canal was sheltered from the many trees so not hindering us too much.  The rain was on and off all the tine so the canopy remained up and was welcome shelter from the wind when the trees did not hold it back.

We had to traverse two more swing bridges along the way.  I struggled to keep AmyJo under control whilst Chris operated the bridges.  On both occasions all went well but it was a bit of a job getting Chris back on board and keep AmyJo from being blown onto the bank.  On the last occasion a leap of faith was required.  I know stupid thing to do but it was the only way to get her back aboard.

We passed the turn for the Rufford branch and wished AmyJo could make the trip as I bet it would be fun.  Sadly, again, her length prevents us doing so.  We cruised past kept going.

The wind was now getting stronger making thing more difficult.  AmyJo put her weight into it and handled well but we were getting tired with all the work keeping her going.  At Burcough we found a nice spot to moor and so put down the pins for the day.


The wind has been blowing all day with bouts of rain passing through all afternoon.  Apart from a walk to Tescos for a shop we've stayed hunkered down in AmyJo.   In a gap between showers I did manage to go down the weed hatch and pulled off loads of urban jelly fish remains  (shredded plastic shopping bags to you).

The forecast is improved for tomorrow so hopefully we can crack on towards Liverpool.  This leg of the canal seems to have gone on for ever but we've enjoyed it so far.  The next few days will see us into Salterhouse docks.

Incidentally we are now barely 12 miles from Southport and the furthest North AmyJo has ever been.  We've covered 82 miles by canal were as its only 24 miles by car to get here. 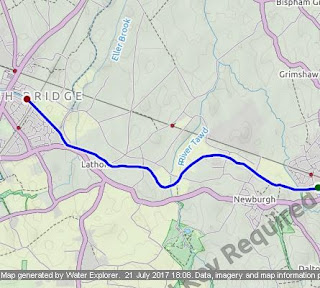 I think k the pub is The Orwell at Wigan pier. Probably named after the author George of the same name.

Those locks before Wigan don't leak nearly as bad as when we first visited. They drained the pound at the junction and we were stuck for several days whilst the pumps were repaired.

Thanks Jenny I've corrected the comment under the photo. God knows where I got Cromwell from!

Tom,
They must have worked on them but they still look in need of some work to us and are still leaking badly.