It was a slightly damp morning when we woke at 7am.  I got up and put the damp to good use wiping AmyJo down with the Chamois leather before getting under way.  We needed to get going as we had a deadline in Moore in the evening.

We had barely got of the mooring when a well known boat pulled up onto the moorings, that being Reckless, from the TV series "The boat that guy built".  She hasn't changed and still has the scorch marks on the roof from the BQQ Guy had on her, though, she looked a lot cleaner than last time we saw her.  Good to see she is being looked after and not left on a mooring to wither away forgotten.  She's been through a lot so deserves to be kept going.

Our first of three tunnels today was Barton tunnel.  Its single way working but at 572 yards long we could see the other portal and the way clear to proceed.   I had over shot the turn to the portal as you can see from the photo but did manage to line AmyJo up at the last minute.  It looks quite low but in fact there was plenty of head room once inside.  We did worry about the top box but there was no need as it cleared the tunnel walls easily.

Next was Saltersford Tunnel.  Again single way working but because the tunnel is not straight with a kink in the middle one cannot see the other portal and if the way is clear.  At this tunnel  entry from the South is only allowed on the hour for 20 minutes.  We arrived at 10 minutes to the hour so a brief wait and then we got underway again.

From here on the canal moves out into the countryside and becomes quite broad giving AmyJo chance to stretch her propeller without causing to much wake.  Its also lock free so one can cover a lot of canal in one day.

It took all of 10 minutes to get through the lock after only a 5 minute wait and we were on our way in a 4 boat convoy, with one boat behind us.


Our passage through the tunnel was mostly at tick over due to very nervous first time hirers taking the lead.  All boats behind including us gave them the time they needed and we exited just in time for boats coming the other way to start  their allotted time slot to enter.

From the tunnel it was a short run to the junction with the Runcorn arm.  Here there is a handy Midland Chandlers on the canal side.  I wanted some replacement engine cover catches and some bilge paint to redo the engine bay.  We stopped on their moorings and spent more money than we intended but, had lunch before proceeding again.

Our intended destination was only a short run from here past the Daresbury Innovation park and its huge tower.  We found out this is a Van de Graaff accelerator (of course we all know a Van de Graaff generator is an electrostatic generator which uses a moving belt to accumulate electric charge on a hollow metal globe on the top of an insulated column, creating very high electric potentials don't we?  No? well we didn't either :-0).

A little further and we came to Moore.  A very pretty village with a seemingly unfriendly resident.  We found three mooring rings opposite the village store and on other boats around but in full sun (when it was out).  Having been told by other boaters we could more anywhere along here we tied up to them for the night.  An elderly lady sternly announce the moorings are for the canal company boats only and we could not stay there.  On inquiring in the stores the polite store keeper said not to worry you will be fine there and we should stay please as being there attracts more boats which brings more business for her.  Grumpy Grandma later came back and took note of our C&RT license details and stomped off again.  Sure enough boats stopped and went after the crews visited the store.  I suspect that is what the mooring rings are for and Grumpy Grandma presumably had a chip on her shoulder regarding visiting boats.


Tonight was our meeting with Amy's prospective out-laws in-laws.  Which I might add, went well and we got on really well with them, in fact, so much so it was way after last orders before we left the pub.  We had met them in the Red Lion Pub and enjoyed a meal together.  Food was not bad and the beer OK though they only had Bombardier on for the bitter.   Afterwards Amy and Rob stayed the night with us on board.  Rob is a local lad from the village so was full of stories of his childhood here.  It was gone 2am before we settled down for the night as a result. 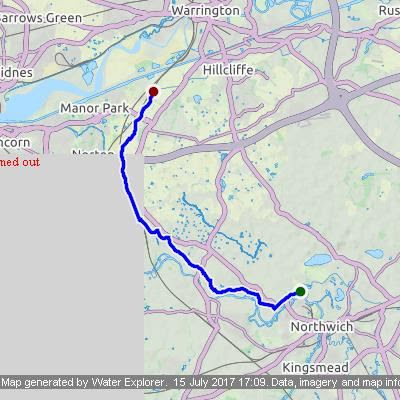