We did not expect to sleep well last night being moored alongside the busy A51 but surprisingly we did until 6am when a rather noisy juggernaut thundered past us that actually shook the boat.  Smudge, bless him, thought we were being boarded and barked his head off, he was only guarding his pack after all.

We managed to reassure him all was well and we all settled down again and dozed until 8:30am.  After breakfast I got AmyJo ready to cruise.  Already the rain which dogged us yesterday had returned but this time that very fine mizzly rain that getsthrough your wet gear.

Sounding the horn I turned left onto the Middlewhich branch and slowly motored though the lines of moored boats.  In fact I barely got above tick over most of the day due to the shear number of boats moored along the route.

As the morning progressed the rain got heavier so with plenty of time on our hands before we get to Liverpool we decided we would stop at lunch time.

At Cholmondeston Lock a boat was ascending and we had one boat ahead waiting to descend.  By the time he entered the lock there were four boats behind us and an equally long queue forming below the lock.  Such is life on the Middlewhich branch.  Being part of both the Cheshire ring and the Four Counties ring this stretch is one of the busiest in this region and long queues quickly form at the locks.  We don't mind as we usually have a good old chin wag with fellow boaters in the queue.  Its fascinating to compare notes once we get underway again.  My news from the other helms and Chris's news from the other ladies working the lock.  Some quite interesting too!


Further along we came across these odd looking boats.  We had seen them earlier this year and must rate them as the smallest live aboard boats around here, they do, however, have some lovely hanging baskets


Just a short wait at Minchull Lock and then we stopped at bridge 12 where we have a fab view out of the side doors but alas they have to remain shut in this rain which by now was becoming quite heavy.


Chris and I spent the afternoon doing odd jobs.  Chris tiding and cleaning the galley cupboards.  When finished I looked at the possibility of installing under cupboard drawers where the plinth is. On removal of the plinth for inspection we reckon we can get quite a bit of drawer space there so this will be my winter project.  I even found a screwdriver under there that must have been left when Fernwoods fitted out AmyJo.  Its lain there all this time undiscovered until now.

As I type the rain is finally easing but it has not let up all day.  The forecast is better for tomorrow so we can only hope as I inadvertently broke the zip on my boaters coat whilst getting on board after walking Smudge rendering it useless.  Still must not complain we badly need this rain so we should be grateful really.   Why can't it rain at night and be dry during the day though? 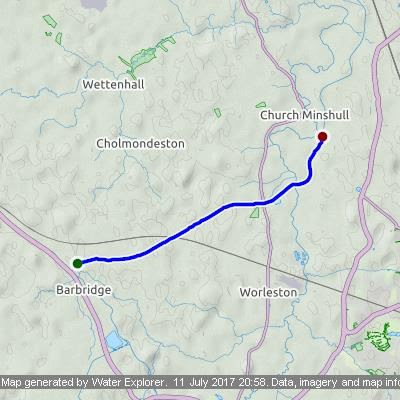