Back To Chester and a meeting of good friends

We stayed four nights in all at Ellesmere Port museum and whilst there on the Saturday working historic boat Shad was giving demonstrations of locking up and down passing our mooring each time to turn round.  This gave me a prime photo opportunity and a chance to play with the camera settings a little.

Time to move on Sunday and so I took AmyJo back down stream to Caughal bridge near the Chester Zoo.

I have to say I was disappointed this time round visiting the museum for several reasons.  Due to lack of traffic the canal from Backford on is now silting up again and weed is a big issue as you approach the port.  I had to hold off whilst the museum trip boat winded and ended completely wrapping the prop in string weed that nearly stalled the engine.   I manage to limp into the port slowly and spent 20 minutes removing said weed when moored.

Further, the museum is now finding finance difficult and is beginning to run down.  I heard from staff that the submerged historic boats were due to be removed into warehouse storage to await their fate as funding for restoration simply was not available.  The manager wanting to use the pound they are in to raise income by allowing fishing to take place there instead.  There seems no enthusiasm to encourage visiting boats to go there either.

If you do want to visit you are faced with no facilities and using pins on the island moorings to moor up.  Be prepared to work hard hammering them in too as large concrete sections exist just below the grass so several replacing and hammering like hell is required.

Mooring rings are almost non existant and not well spaced,  usually located where a submerged wreck is positioned unknown to the unwary visitor, so a ring may look inviting but check with a pole first to avoid parking on top of one.  The levels do rise and fall so could catch you out.

Only one water taps is available for use for the boater by the museum shop but is not easily accessed due to the trip boat which is usually moored just outside the top lock gate and leaves little room to get to the tap so a long hose is needed.  Oh and there appears no facility for elsan disposal or pump out visible too.

Sadly my advise now is, don't bother if time constrained.  The mooring fee is £19 for two people for the first night (though this is access for a year to be fair) and £4 a night there after but you do get to view the museum as much as you like during your stay, provided that is, there will be much left to see from the sound of it.

So, on with our cruise, and I moored up in a super little spot within walking distance of Chester Zoo in the countryside.  The weather now decidably hot made the spot even more saticfactory as we could let Smudge off to roam free on is long wire lead as often as he wanted.  I still don't fully trust him not to dart off again yet.

We were prepared to stay here a week but an instant Facebook message from Del and Al on Derwent 6 (click) informing us they were headed for Chester changed that idea.

Most of us enjoyed some lovely hot weather and we were no exception.  In 30+C I moved AmyJo back to the Chester Basin and topped up my tan on the way. I love cruising in the sun and it makes all life's woes melt away when I do. I don't ask for more.   Even the shorts saw light of day for the first time this millenia!


On arriving at the basin I was surprised to find it completely empty apart from one boat on the mooring opposite the dry dock.  I moored at the first visitor mooring within hose length of the water tap, bonus don't have to move to top up.

Next morning a familiar boat came through Northgate locks being Del and Al on Derwent6 who moored directly behind AmyJo. 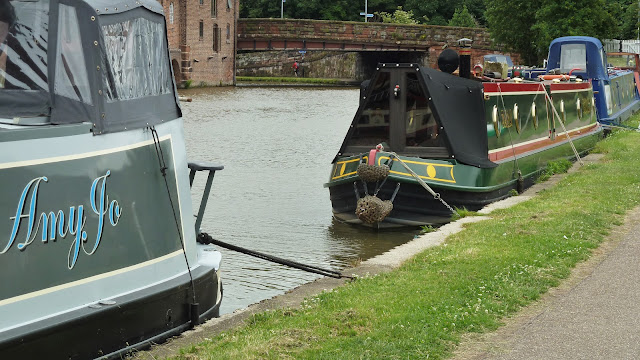 Now call me daft if you will but seeing AmyJo and Derwent6 together is quite a big deal for me and something I always hoped I would see.

If any of you have followed our blog from the early days will know Del and Al showed us around Derwent6 at Crick when we were first looking to have AmyJo built.  We then met them again the following year at Wrenbury on the Llangollen canal.  It was at this meeting that after talking to them our dream suddenly became a reality thanks to their advise

So seeing Derwent6 and AmyJo together for me represents the start of our journey towards living the dream and AmyJo the dream come true. 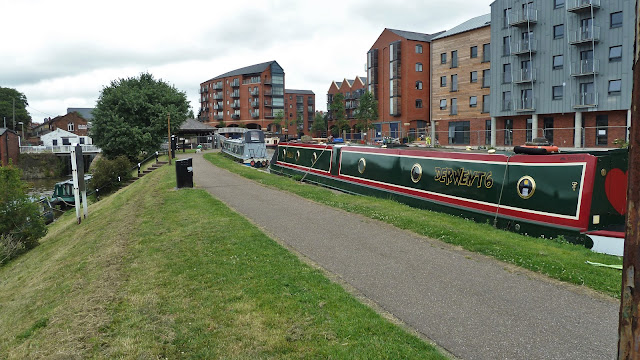 On Thursday Del and Al went off to explore the city as this was their first time here with Derwent6 so they wanted to make the most of it.

In the evening we found out there was live entertainment in Telford's Warehouse and being music lovers we went over and had a great night listening to Alex Green who was absolutely brilliant.


Today, Friday, Del and Al had to move on as they will be cruising further north to meet up with friends Mark and Sian on another lovely Fernwood boat.  We will cross paths again so have planned a stop over all together during our cruise later next month.

It was fab to see them again and we thoroughly enjoyed their company once again.  Hats of to them for keeping the boat immaculate.  Derwent6 gleams as good as new even though she is now 9 ears old.  Now where is that polish Chris?

As for us, we will be hanging around the Chester area until the end of the month as Chris has her end of term works do in Chester so we want to remain close by.  Also this weekend is the roving traders market up by Cow Lane Bridge, another reason to stay a little longer over the weekend.