On Wednesday we all moved upstream and stopped at the Jack Mytton Inn.  Once again the pub is closed and is up for sale   If you have a spare £750000 its yours if you want it.  Such a shame as it was a lovely pub with great food.

We had left Frankton first so got to the Mytton about mid morning to find all the moorings empty. We then spent the morning informing boaters hoping for a meal in the pub the it was permanently closed.  This seemed to work in our favour as the boaters moved on leaving the moorings free for our fleet.  In the evening we set up the bar-b-q in the park car and had yet another enjoyable evening.


Yesterday the fleet got underway once more.  I left about 11:30am after the others shuffled the cars to our next destination.  Chris took the opportunity to hitch a lift with Marie on her way to work to call home and get the post and indulge in some retail therapy in Chester.

While cruising I was followed by Eric, Dianne and Graham each in their respective boats.  Dianne had joined Paul the night before and was moving his boat whilst he was at work.

The morning was warm and sunny but ominous grey clouds scudded across the sky threatening rain.  A few drops were felt but nothing came of it.  With Marie working it was decided to leave her boat at The Jack Mytton and Eric and I would return later to move it up.

We arrived at the first of the two New Marton Locks.  Having moored up just as a boat left the lock I waved Eric to go in first, but as the boat leaving went passed Eric's boat swung out from the stern after he'd stepped ashore so could not get on board for a bit.  Seeing Dianne on Paul's boat close by he waved her on and we worked the lock for her.

No sooner was the lock full another boat appeared wanting to come down.  This was the routine until all the fleet was locked through, boats arriving to descend as we worked our boats up one by one.

The same routine would work for the second lock.  By the time we arrived Dianne was in the lock and filling it.  I moored and then went up to help.   Each boat then locked through by the crew behind.

There is a water point above the second lock so I took the opportunity to stop for a top up and let Smudge stretch his legs a little.  He is still on light duties with his leg so we don't walk far.  Its healing well and he is using it as if nothing happened..


The rest of the trip was a pleasant run with no problems.  I passed the lion Quays Hotel to find all their moorings empty.  Those of you who have followed the blog for some time may recall we stopped here on our last trip to find the moorings very silted.  Despite numerous new signs offering complimentary mooring here no one it seems is taking them up on their offer.


After a 3 hour run the fleet all moored up at the Poacher's Pocket, in fact we took most of the mooring space there.

Eric and I then jumped in the car and returned to the Jack Mytton to retrieve Marie's boat.  We had an uneventful run and got through the locks with them both in our favour.  At the top lock Eric took the boat to the water point While a hire boat waiting hesitated to proceed into the lock.  The lady on the boat explained it was their first ever lock and she was not sure what to do.  I offered advice and helped them through the lock.  It seems the hire company had imparted so much information to them they had information overload.

Whilst working with the crew I explained my mantra to close everything behind the boat before opening anything in front of it.  It seems this worked as the lady soon got the hang of lock wheeling, even explaining what was happening to her two young daughters.  She even used to the closed the paddles and gate after her boat exited the lock.  Thanking me profusely they went on their way clearly enjoying their new adventure.

Later in the evening a nice meal was had in the Poachers then a night cap on one of the boats before bed.  We snuck back to AmyJo at 1am in the morning and, to our horror, managed to set of her burglar alarm.  It was a full 10 minutes before we could silence it!  Naturally sheepish apologies all round were called for this morning but oddly no one seemed to hear it, either that or they were just being polite.

Today, as  Paul, Marie and Graham all had to work late it was decided we would stay put.   After the long evening last night those of us not working chilled for the most part.  AmyJo was moored on a corner so when two small boats pulled out ahead I moved AmyJo up into the vacated space onto a much more comfortable spot.

In the afternoon Eric and I took the car to Froncsyllte to check out possible mooring spots.  Normally heaving with boats, we were again surprised to find the moorings there quiete.  Hopefully there will be spaces for us to moor there tomorrow.  Clearly with the Northern canals grinding to a halt this has has an knock onaffect on boat numbers on the Llangollen. 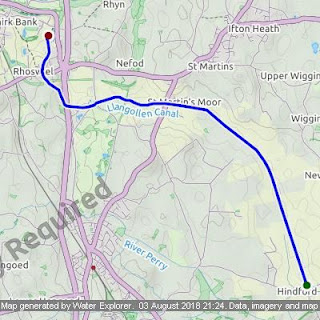