After the late night last night a few of us woke late.  It took a while to get mobilised but eventually cars were moved to their new locations to be available at today's destination, Blake Mere.  We had intended to stop at Ellesmere but yet another festival meant this would not be possible so Blake Mere was settled for.

Todays weather was cooler than of late so quite pleasant but with plenty of sunshine.  While we were getting ready to get underway a hire boat passed by with a Swedish crew aboard.  We followed some time later.

Soon after bridge 10 we caught up to the Swedes.  It seems they were moving at just over tickover.   They were taking things VERY carefully taking ages to go through bridge 'oles and passing boats.  In fact they were so slow I had to keep putting AmyJo into neutral.  There are several bends around this section making overtaking impossible but it was nice just to bimble along anyway. We followed them for over an hour before they moored up at the Narrow Boat pub, just on the bend before a blind turn into a bridge.


We continued our cruise uneventfully after that until Frankton Junction were we found Brian and Mary moored up.  They are in our marina so we exchanged pleasantries as we passed.  At the junction itself we were passed by Dave and Jude on their newly painted boat, "Hey Jude".  Seems nearly all Tattenhall boats are out on the Llangollen.


The next three miles consisted of twists and turns so not much to speak of.  As we approached Ellesmere boats could be seen moored up for some way.  At the junction we spied Mountbatten and Jellicoe the fuel boat and butty.  Richard was about so we came along side and topped up with diesel while Eric and Graham waited their turn on the nearby services.  The arm, crammed with boats for the feastival, was bustling with gongoozlers.

We told Richard two more boats would call later in the evening.  He was happy to serve them whenever they arrived.  We then continued on to Blake Mere.  There we moored after the tunnel as this was the first place a mooring was free.   Later Graham had walked further round and found better mooring spots but by the time we upped pins and moved two boats had arrived from downstream, though there was still plenty of space to be had.

Paul and Marie followed in the evening and arrived at 9:30pm.  Chris had prepared everyone Chicken cooked in Cola, mash and veg.  This was immediately served with grateful thanks to Chris from everyone.  After the previous late night everyone then retired to bed after coffee. 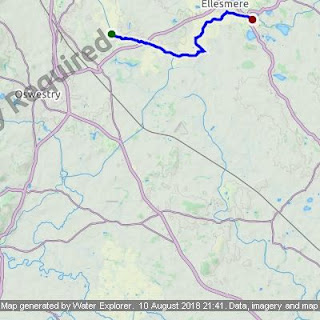