Today Graham left for the Cotswolds for the weekend to see family so I would be helming his boat leaving Chris to helm AmyJo.  The cruise today was to be short to see if Chris was comfortable handling AmyJo and looking after Smudge at the same time.

We left with me leading on Graham's boat, followed by Chris, and then Eric.  Not long after we got under way the rain started and increased as we went on.  It got so heavy that photographs were impossible and all of us, including Smudge, were soaked through.  I did manage to get one photo but not a good one

Chris, despite the worsening conditions, managed to soldier on and to be fair, handled AmyJo extremely well.  We trudged on knowing our goal was not far but with thunder and lightning nearby I was getting worried.  I stopped to check everyone was OK and if they wanted to stop but as we are all soaked through we all agreed to continue.

Eventually we tied up on the visitors moorings at Hampton Bank and as we finish tying off the rain stopped and the sun came out, typical!  We went off below decks to dry off and have a warming cuppa.

Later in the afternoon we had another heavy downpour so intense water was building up on the roof channels and gushing out the roof drains like a waterfall.  It was bouncing so hard the rain dripped inside via the mushroom vents.  When it eventually stopped, after several loud rumbles of thunder, the sun appeared once more.AmyJo was now as clean as a whistle, the intensity of the rain washing off any dirt on the boat. 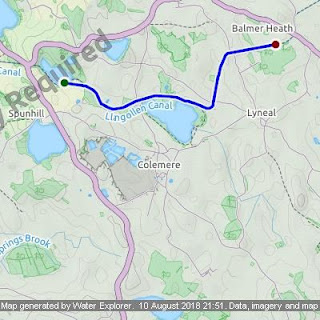