Day 10 continued and a shock.

In the end the bad weather forecast on Sunday only amounted to a downpour overnight and not much wind though the latter could be due to our sheltered location.   We had made the decision to stay put so took advantage of our lovely location for another night and I updated the blog.

In the evening after dinner a few of us stood by the boats chatting when we all got a shock as an almighty crack was heard.  We spun round just in time to see a young tree come crashing down on the bow of a boat moored just upstream from our fleet.  The fallen tree now blocked the cut.  Luck would have it there was a lull in passing boats and no damage was caused to the moored boat.  With all hands on deck it was decided to pull the tree out of the way aided by a rope that I supplied.

After 30 minutes if shoving and heaving we finally manage to move the tree out of the cut and alongside the towpath.  Some boater's gold for someone!


Barely had we got the tree out of the way than 5 boats, lead by two hire boats, appeared coming down stream.  Added to these were two boats coming up stream.  Rightly, the lead hire boat coming down moved over to make room for the oncoming boats and promptly ran aground.  Making the usual novice error he applied full forward throttle and got nowhere.  The result of this was his  now substantial prop wash then slewed the hire boat behind him across the cut running them aground with their stern bumping into AmyJo.  After that chaos reigned.

Repeated attempts to drive himself forward off the grounding, the lead boat was going nowhere and only making matters worse.  Added to that he now could not reverse because of the grounded boat behind him.  The other boats did best they could to stop and hold station out of the way.

After 20 minutes of this I stood on the stern of the boat behind us and called for the lead boat's bow rope.  With that I pulled him towards me which enable him to get underway again.  Repeating the process with the hire boat behind him normality resumed and all boats got underway again.  With that excitement out of the way we settled down around the Bar-B-Q fire for the rest of the evening

After a leisurely breakfast we got underway about 10:30am.  The weather had improved and the morning pleasant.  We slowly motored past the lake and moored boats.  I never tire of the view around these parts.  It must rank as one of my fav spots on the Llangollen second only to the aqueducts further on.

Next is Ellesmere tunnel, only a few yards long but, it is still as enjoyable as a long one.  I do so like tunnels as it concentrates the mind on the job in hand, steering the boat without hitting the sides.  Sometimes I get it wrong and the bang echos down the tunnel alerting everyone of my folly, but not this time.

We had hoped to pull into Blackwater Marina for a pump out but a phone call to them informed us it was hand over day so they could not oblige until 4pm.  We are not desperate yet so we still have a few days to go (if you'll excuse the pun), though I am dusting off the shovel just in case :-)

Ellesmere was as busy as ever with many boats on the approaching moorings.  This boat was halfway into the marina before they realised it was not the arm!  Silly session at its best.


We then decided to stop for some shopping at the Tescos at the end of the arm.  I turned AmyJo into the entrance to find the arm chocker block with boats.  A moored boater ran up and advised us the winding point at the end of the arm was blocked with boats and we wouldn't be able to wind AmyJo.  I reversed out and just managed to get on the moorings outside, opposite the junction, and Chris went off to shop.  She later found that the arm was full due to a Christian fellowship boaters get together.

On Chris's return the C&RT services happened to become free so we quickly pulled onto them to top up the water and dispose of the rubbish.

We then had an almost uneventful cruise up to Francton. Along the way we were hit by a rain burst so heavy I had to pull in and stop as I could not see in front of the boat, this lasted for several minutes.  Just as we were preparing to get underway a rather soaked looking chap passed on his boat.  He showed us a whisky tumbler that he announced was empty before it rained.  It now held 2cms of rain water!

We continued when the rain stopped and got to Francton junction where later some of our fleet joined us.  I was then driven back to Blake Mere to bring our friends boat to our new moorings as she was working, so, once again the fleet was moored line astern of each other and another pleasant evening was had chatting with good friends. 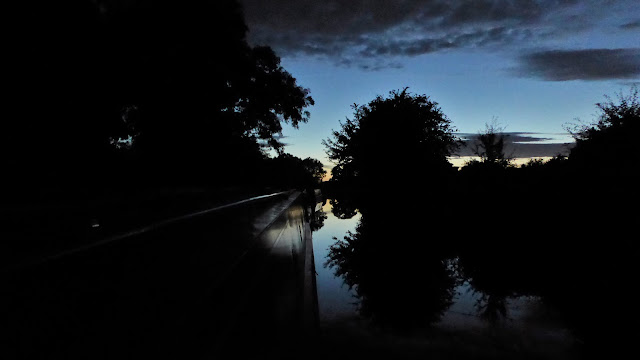 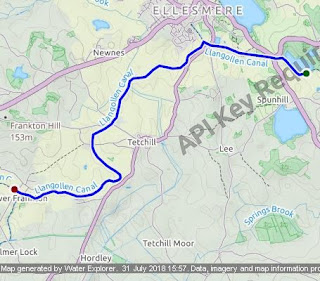 This morning Eric and Graham took the car on a scouting party to check out possible car parking at our next planned stopping place.  Eric also had a hospital appointment first thing back home.

They were gone most of the morning and on their return the report was not good as there was very little place to park cars.  With that in mind and our trip into Llangollen several days away yet the decision was made to stay put as the moorings here at Franction are pleasant enough with a good car park nearby.

This gave Chris the opportunity to catch up with some washing and me to get this blog up to date.  Mobile signal is less than ideal around here and the only one with any form of internet amongst the fleet is AmyJo's router.  Her little pepper pot GSM antenni earning their keep even if it has just taken an hour to up load the pictures!

It would also seem I will have to replace my Mobile phone now, (as you will recall a refurbished replacement for the one dropped in the cut), as it has not been able to connect to a network for over a week now unless I am outside on the roof of the boat standing on tiptoe doing a pirouette when everyone else has full signal and 4G.  All this is why I'm not able to blog on a daily basis!