Having succeeded to get onto the Llangollen we stopped overnight just after Greenfield Bridge 12.  If you are looking for a really quiet place to stop this is it.  It was so quiet there was even no road noise, in fact, the loudest noise was the wildlife rustling about in the bushes when it got dark.

It was so quiet that Smudge let us lay in until 8am before he stirred, most unusual for him.  We had a leisurely breakfast and then got underway at around 10am.

Ahead of us lay the Swanley locks and Baddiley Locks, 5 in all.  Just before moving off a boat had passed us so we resigned ourselves to having the locks against us, however, this is the Llangollen canal so when we reached the first lock the boat ahead was leaving the lock but another two were waiting to descend.  With willing young crews about we worked through all the locks in no time, boats descending at each one as we arrived.

By the third lock the day was warming up nicely but clouds were beginning to form.  Rain was forecast mid afternoon but there seemed little chance it would affect us as we climbed the locks in the sunshine. 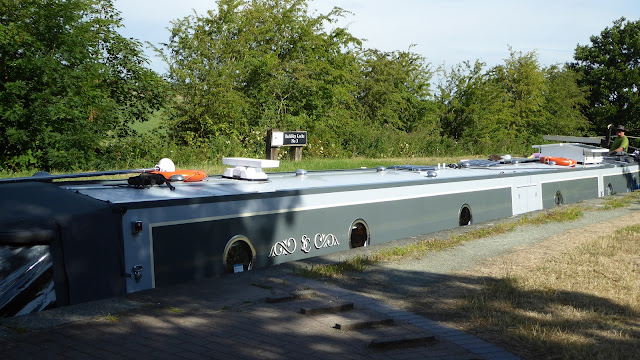 Just before Wrenbury we passed a familiar mooring.  In previous years we have enjoyed seeing the old classic cars and large duck pedalo there but alas not this time.  It would seem the cars are now stored in a large building behind the mooring.  Instead we were treated to this delightful horse buggy sheltering under the carport. 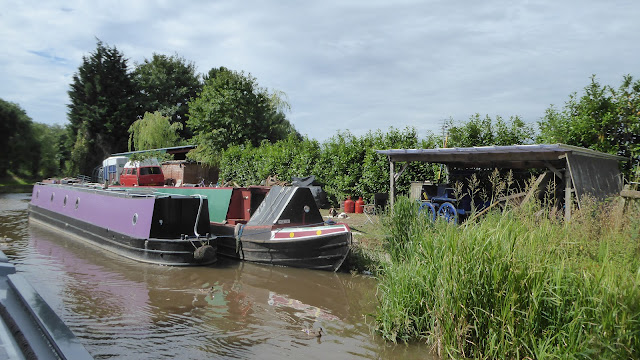 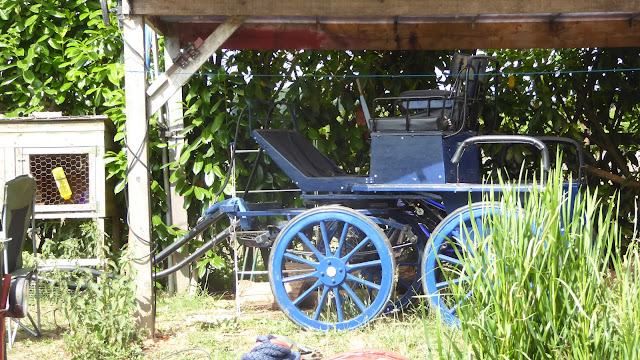 The rest of the cruise into Wrenbury was uneventful and with gathering clouds the cooler conditions were welcomed.

When we reach the first lift bridge before Wrenbury we were lucky to meet another boat coming downstream whose crew had lifted the bridge as we arrived.  We were signaled to go through.  We thanked the lady working the bridge as we passed.

On arrival at Wrenbury we found the visitor moorings busy but with plenty of gaps between boats.  As I got to the last boat in the moorings I happened to look back and spotted a boat leaving.  A quick reverse of 3 boat lengths and we slid into the vacated spot thanking our timing as now all mooring spaces were taken.

We were running a bit short on food staples so walked into the village and Stocked up in the Spa.  Milk, ham and cheese acquired we got back to AmyJo just as it started to rain.

After lunch and with the rain getting heavier we just chilled all afternoon listening to the radio and watching a damp world go by.  In the evening we took ourselves to the Cotton Arms and met up with friends Dave and Jo for a good old catch up.

Today has been a lazy day staying put.  After the heavy rain of the night AmyJo was dripping wet this morning so I put this to good use and shammy leathered AmyJo down stem to stern, which has cleaned her up nicely.  In doing so I conserved water and in fact watered the grass too :-)  This seems a good way to wash the boat without using any water!

We also took the down time to give the well deck a good clear out and clean.  Whilst Chris cleaned the floor and cushions I polished the chromium outside which was looking a bit tired.  AmyJo is starting to look spick and span again. 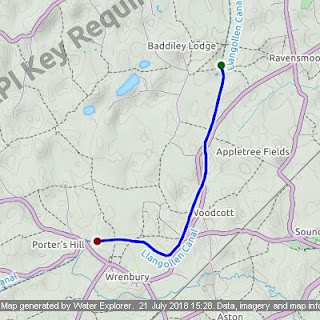 Lovely to catch up with you both, can’t beat a noggin (or two) and a natter