I have a confession to make.  We overstayed at Wrenbury, there I admit it!  The reason was simple, our friends from the marina were heading our way and we wanted to greet them when they arrive though it would be 2 days before they got to us.   For one of our friends this trip is momentous as it will be the furthest she has travelled on her boat, so a welcoming party seemed appropriate.

While we waited for the two preceding days we kept busy doing absolutely.....nothing.  We did do lunch with Dave and Jo on nb Third and Final yesterday but other than that we chilled out and recharged our own batteries.  Much needed for Chris in particular.

These lads entertained us for some time.  Neither of them had any clue how to row and just spun round in circles splashing each other.  They mastered it eventually but gave everyone great entertainment whilst doing so.


Graham and Marie were due to arrive late yesterday but due to the fact it took them longer than they thought they finally stopped at 10pm at Bridge 12, the spot we stopped the night before we arrived at Wrenbury.  They eventually arrived safe and sound this morning.

Having stayed 3 days at Wrenbury we really needed to move so decided to cruise a short run to the visitor moorings just above Marbury lock and visit the village.

The trip gave us a chance to try our our new walkie talkies.  Our Cobra radios had done sterling service over the years but one has decided that its speaker was not going to work any more, it had been dropped in the cut and dried out.

After the Shroppie I'd forgotten how narrow the Llangollen can be and some places are choked with reeds.  Luckily no boats were coming the other way here.


On arrival at Marbury lock we thought we would have to turn it in our favour but, as Chris reached the lock, another boat arrived to descend.  The reeds are prevalent here too so I held AmyJo well back from the lock entrance to give the boat room to leave.


The visitor moorings above the lock are but 5 minutes cruise.  We moored there and were the only boat there for a while.  After lunch this boat arrived and tried to reverse onto the mooring.  It took him a while to get moored up.


After lunch we took a stroll up to Marbury.  Its a shame Marbury is often passed over by boaters.  Its is a small village,  nothing special, but quaint in its on way.  It consists of a dairy farm,  some houses and cottages,  A large pub that would not be out of place in a town and its jewel in the crown, a church.

St Michael's church outside is as impressive as any other church of its size.  In side its a delight and on a hot day like today its interior is cool and calming. 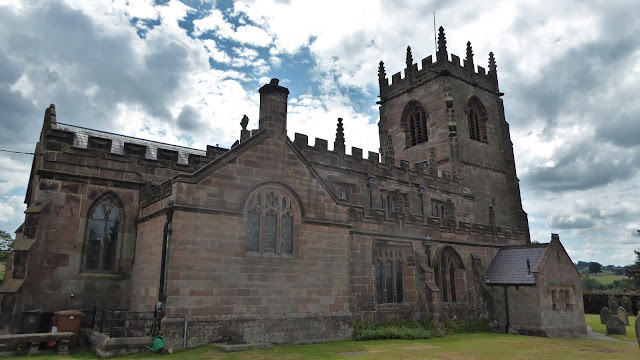 There is an octagonal timber pulpit, dating from the 15th century, that features crocketed ogee panels; it is the oldest in existence in Cheshire.  The church also contains an 1855 monument to William H. Poole with a Gothic canopy. In the tower are charity boards, including a circular one dated 1777. There is a ring of six bells. Four of these are by Rudhall of Gloucester, three being dated 1719, the other 1790. The other bells were cast by John Warner and Sons in 1864 and 1892


Outside the church holds one more surprise for the visitor.  Wonder round the back and one is greeted with a stunning view of a nearby Mere.


If you can afford the time to walk the half mile to the village its well worth stopping for a visit.

Back at AmyJo the day was getting hot and humid.  We were moored under some pine trees which afforded us some cool shade.  We broke out the chairs and with a refreshing cider each we chilled for the rest of the day on the towpath.  Even Smudge sheltered under my chair to stay cool 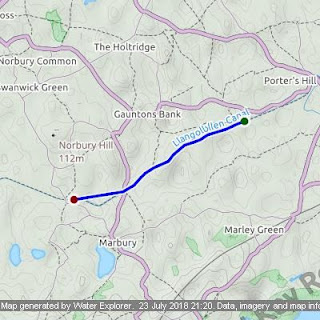