Last night was hot and sultry despite the building wind but that was being held at bay by a line of tall trees on the offside.

About 9pm we could see loads of flying ants over the houdini hatches and assumed it was the weather bringing them out.  When I took Smudge for his last walk I found AmyJo's roof teeming with flying ants.  Millions of the little buggers swarming everywhere over the roof.  I can only assume the light colour of AmyJo was attracting them as the other boats were not affected.  I tried sweeping them off but to no avail.  Then a passing couple suggested fly spray and that indeed killed them all off (the ants that is not the couple).  I then swept them all off much to the delight of the fish that swarmed like Pyranna's behind AmyJo.

Thanks to a kind boater running his engine at 6:30am this morning we rose at 7am just as he left.  We were planning to stay put so I took the opportunity to practise the guitar.   Oddly all the other boats left leaving us on our own, can't think why.

We got a call from our friend Eric to say the fleet were on the move and heading for Bridge 57 moorings by Blake Mere.  As the weather was still good and the winds not too strong we decided we'd join them so got underway about 11am.


We soon reached Cole Mere just visible through the trees and passed the lovely log cabins by the lake.

We got to Blake Mere about midday and again all the moorings were empty.  Bridge 57 moorings were 5 minutes on so Chris went on to scout out mooring spaces.  Her news was not good as these moorings were busy with boats and fishermen so we decided to stop at our favourite spot beside the picnic table.


Not long after the fleet arrived and filled all the available mooring spots with us.  I had to move AmyJo a little and as I untied the ropes and was holding her steady a boat, whose name shall not be mentioned, came rushing past.  It was all I could do to hold AmyJo so I shouted to please slow down to which the pompous ass at the helm replied "I'm on tick over"  I relied then drop out of gear to slow down to which he called " no I have to keep control of the boat or I'll smash into you".  I'll not print my reply but I did get a mouthed apology from his poor wife.

The forecast for tomorrow is not good with heavy rain and strong winds on the cards so we have all decided to stay put for now. 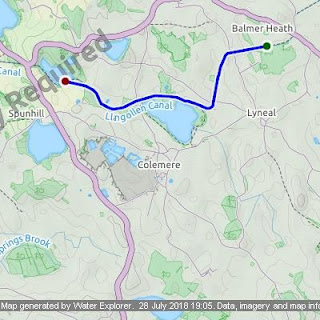