This will have to be a two day Blogathon for this post.  We found with the Caldon canal that the increase in beauty as you travel upstream is inversely proportional to the drop in internet and mobile phone signals.  Beyond Milton you may as well turn off your phones and pretend its the 1980s.  Obviously the telephone companies have yet to work their magic in this area.  We use 3 networks, Talk Mobile, EE and Vodafone.  All had No Service.

So back to Friday,

A bit of a grey day but not cold and, much to our surprise, very little wind.  We set off and within minutes we came to Hazelhurst Junction.  One cannot help feel a sense of Deja Vu here as the junction is modeled on the one at Kidsgrove.  It feels odd but we turned South to continue North to Leek.

The Leek branch runs parallel to the mail line then passes over it via an ornate aqueduct.  The view from which is quite splendid.

After the aqueduct and a very tight left turn we came across this barge in the middle of nowhere.  Quite why its there is no obvious and we wondered if this could be the missing barge that an appeal went out for from Birmingham.  Of course there are hundreds of these so we dismissed the thought.


From here on the canal changes to long narrow stretches and some wide but both with some really tight corners.  Like us large boats need to proceed with care as there is not much room for error.   There is compensation of course, as this far up the Caldon is particularly pretty with some wonderful houses along the way.


I think if one was looking for a cruise the Caldon should be high on your list.  Beyond Hazelhurst the canal changes its persona completely.  Now one is greeted with tree lined peacefulness and very few boats on the move.  Like the Macc this too needs dredging in places but provided the revs are dropped back and a slow pace is taken one can enjoy the view and take time to soak it all in.  One should not rush the Caldon.


Rounding a corner the canal suddenly opens up to a huge pool.  We could easily turn AmyJo in one complete circle in it.  Here was a staging area for the 130 yard Leek tunnel just in front of us.  Tall and as narrow as some locks we passed through unscathed.

The last section of the branch is very narrow but fortunately we passed no moving boats.  We reached the terminus, a 70 foot winding hole, and had hoped to stop here.  Unfortunately every spot was taken by continuous moorers.  Many boats looking like they were there for the duration so, reluctantly we winded and retraced our steps.

On the way back after the tunnel we spotted the tower of St Edwards, former mental asylum, now a swanky des res of appartments apparently.  Wouldn't mind that tower appartment, bet the views are fantastic from there!
Back at Hazelhurst we wanted to wind and go down the main line.  Another boater in a 58foot boat had difficulty turning here and told us we might need to go on to the winding hole.    Not boasting but with careful maneuvering I winded AmyJo round with plenty of room then reversed back onto the lock landing to wait for a boat coming up the locks.

After dropping down the locks we continued along and then under the Leek branch.  The aqueduct was in clear view ahead and considering it was built in 1941 its quite impressive.

By Now our mobile phone signal was dropping away and we could no longer make any calls.  Internet too was intermittent.  Just when we thought we needed it the most we lost service.  Passing through bridge 38 and outside the "Holybush" pub we spotted a boat we believe to be similar to the one stolen from Mercia Marina but were powerless to notify any one.  The similarities could not be ignored.

We knew the missing boat was not sign written but the boat we saw had a recent registration and was called The Dog and Duck.  Probably a boat from the same stable and not the missing one but still it played on our minds.  Now we have signal C&RT offices are closed and the boat is probably long gone by now.

We cruised past Flint mill and descended the locks there.   Not long after signs of the Churnet Valley railway could be seen.


At woods lock a very sleepy fisherman was dozing whilst fishing on the lock landing.  I called out to him to let him know I needed the landing.  "No problem" he cheerfully replied "I'm used to it" and stowed his rod for me.   The lock was against us so while Chris reset it in our favour Ron (as I found he was called) and I had a good old chat.  He was a really nice fellow, offered all sorts of advice on where to moor and what pub to call in.  We had a good laugh together then we promised him a cuppa on our return if he was there.   I'm not sure but the fishing may just be a ruse for him to sit and doze away the day.  If it was he was a master at it.

In restoring the canal the restorers found sections of it had been buried for ever under an industrial estate.  This did not deter them and they ingeniously enlisted the use of the nearby River Churnet as a bypass.  At Oakmeadow lock a river gauge shows if it is safe to proceed.  Today it was in the green so we dropped onto the river and carried on.

Being a river I proceeded with caution but today the river was benign and in fact was a delight.  Being deeper than the cut AmyJo flexed her muscles and I had to throttle right back to maintain a respectable speed.

Just before rejoining the canal we came across Consall forge moorings.  We stopped here for the night and enjoyed the best Rump Steak we have ever had.  One simply must stop for a meal here as the food is rather yummy, especially the steak!

Now if you do eat at the Black Lion one word of warning.  DO NOT order chicken as the pets get quite upset.  Sitting outside the pub some of the fattest and most elegant chickens strut around your ankles like little puppies.  We believe they may be the landlords pets and are definitely not on the menu. 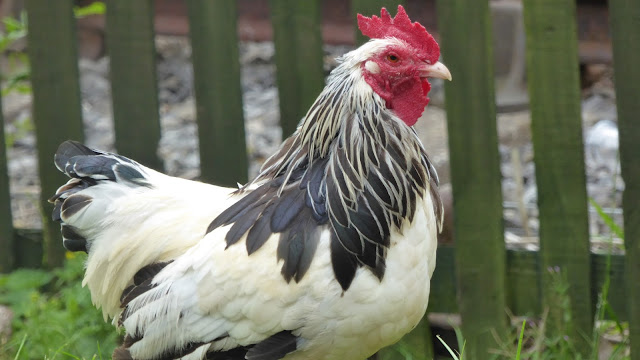 Next morning we got up and broke out the bikes.  We knew we could not get through Frognall tunnel so set about cycling there to see it.  It was a lovely warm, sunny day so off we set for the 5km round trip.

As we got ready to leave a steam whistle could be heard then the green Hotspur steamed through.  Incidentally access to the pub from the canal is over this railway line so do be carefull.

The section from here is particularly pleasing.  From Consall forge to Flint Mill it is so narrow passing would be nearly impossible except only in a few places would it be possible.  At the lock a 70 foot winding hole would be the limit of our navigation.

We made Frognall tunnel and could see why not many boats can pass through.  I have to admire Jo and keith for managing to get through on Hadar (Click).  They only just squeezed through so no way would AmyJo.  You can see why


On our return from our ride it was time to leave.  Only place to wind was Flint Mill lock through those narrows.  We took it slowly under the railway bridge in full view of all the gongoozlers with milimeters to spare as we went through.  Threading the eye of a needle came to mind again and then we crept up to the winding hole a mile on, thankfully not meeting any other boats.

The winding hole is a very conservative 70 foot one.  We only had 3 feet of room as we spun with the bow on the bank all of the time.  If you are taking a 70 footer there be prepared to pole her round.

We made it all the way back to the railway bridge and prepared to turn under it.  Just in time Chris called out stop as a boat is coming through. Luckily we were almost stopped so I brought AmyJo to a halt.   Fortunately as the turn is sharp there is a wide pool here and the boat passed down my starboard side informing us another was right behind.  This gave the gongoozlers some real entertainment and the cameras were clicking away like mad.  I just held AmyJo in place until they too passed and then maneuvered her through the bridge into open water.  Thank god the boats came when they did and not sooner.  Sorry no photos we were both far to busy at that stage.

We retraced our steps along the Churnet and locked onto the canal again eventually stopping down stream of Flint Mill in Cheddleton.

It was so sunny we passed this beautiful scene.  I promise I've not post edited the picture and it would make a perfect wallpaper for Microsoft I think